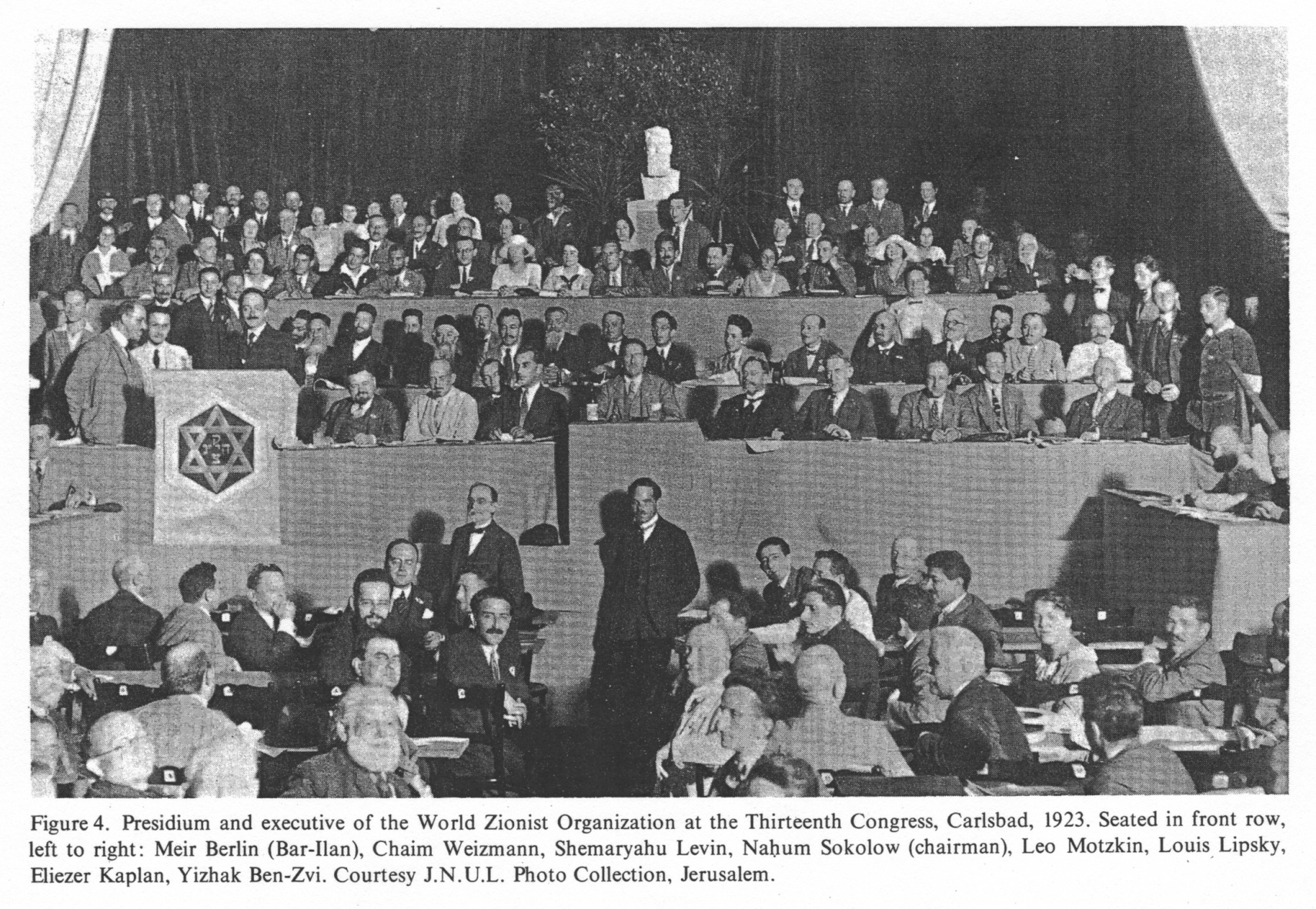 Over the past few weeks, I have noted a major shift in the Jewish world, a shift that relates to the Haredi (ultra-orthodox) community in America and the startling decision by their most respected leaders to put up a slate for election to the World Zionist Organization (WZO).

But before I delve into this astonishing development, let me give you some background history.

Since the advent of the Zionist movement in the late nineteenth-century, the Haredi Jewish world has been at best suspicious, and at worst openly and aggressively hostile towards Zionism.

In 1900, just three years after the First Zionist Congress, a book called Ohr Layesharim was published by ultra-orthodox activists in Warsaw. This book articulated a firm rejection of Zionism, which the authors contended was just another version of Reform Judaism.

Ohr Layesharim also contained dozens of letters condemning Zionism, written by a broad spectrum of the most prominent rabbis of the era, including Rabbi Chaim Soloveitchik of Brisk, and Rabbi Sholom Dovber Schneersohn of Lubavitch.

Antipathy towards Zionism, and particularly towards Zionist leaders, formed the backbone of the Haredi attitude during the pre-state era. And although there were different factions among Haredim, each with their own approach – such as Agudat Israel, who were willing to work with Zionists without formally recognizing them as authentic representatives of Judaism, and others, such as the Munkatcher Rebbe, Rabbi Chaim Elazar Shapira, who would not contemplate showing Zionism or Zionists any kind of recognition or even acknowledgement – broadly speaking, the Haredi world maintained its stance, namely, that Zionism was created by heretics, and therefore, in every iteration, it continued to be an outgrowth of heresy.

To be fair, the secular Zionist leadership were no less antagonistic. They considered Haredim to be backward obscurantist reactionaries, and worked ceaselessly to undermine the influence of traditional rabbis and leaders across the Jewish world, hoping to realign Jewish identity with secular Zionist nationalist ideals.

The first years after the creation of the State of Israel did nothing to repair this rift. Although Agudat Israel were signatories to Israel’s Declaration of Independence in 1948, by the early 1950s it became clear that Israel’s leaders, such as David Ben Gurion, had little respect if any for the needs and concerns of the small but very determined ultra-orthodox community, and every issue that came up quickly evolved into an existential battle, compounding the Haredi view that openly endorsing the State of Israel was a dereliction of the Jewish faith.

In 1952, Agudat Israel’s elected representatives resigned from Ben Gurion’s government, and subsequently refused to join any coalition government with secular Zionists, preferring to advocate for the interests of their constituents as outsiders within the system, rather than as full-fledged members of the Zionist project.

But that all changed in 1977, when Menachem Begin, scion of Zev Jabotinsky’s Revisionist Zionist ideology, won the Israeli elections after almost 30 years as leader of the opposition.

Immediately after his stunning victory, the Prime Minister-designate was asked what style of leadership he intended to pursue in his new job, to which he immediately responded, “a Jewish style.”

True to his word, Begin wooed the Haredim, with whom he had sat in opposition for decades, and correspondingly, the Haredim, guided by their remarkable rabbinical mentor, Rabbi Eleazar Menachem Man Schach, agreed to join a Zionist-led government.

The precedent was set, and since that time the Haredim in Israel have become ever more deeply embedded into Israel’s mainstream. But what had become the norm for Israel was not reflected in the Diaspora – at least, until now.

Which leads me to the WZO. The WZO was founded in 1897 at the First Zionist Congress in Basel, for the purpose of promoting the Zionist agenda across the Jewish world.

In order for it to be democratically inclusive, the WZO included an elected body called the World Zionist Congress (WZC), made up of representatives of Jewish groups spanning the spectrum of Jewish identity. Since 1897 the WZC has gone through various phases, today comprising of 500 delegates who meet in Jerusalem every five years.

The WZC meeting enables elected delegates, two-thirds of whom are not Israeli citizens, to exert ideological influence on Israeli society and to further a global Jewish agenda, and, of course, to allocate financial and other resources to various organizations and projects in Israel.

The 38th WZC meeting is scheduled to meet in Jerusalem this coming October, and current ongoing online elections, which end March 11, will determine the size of the various delegations.

At some point last year, it dawned on Haredi leaders in America, as it had already some years earlier on American Religious Zionists, that the secular and progressive Jewish world in the Diaspora, and particularly the United States, had been able to overrepresent itself within the WZC, thereby determining the use of funds for projects in Israel, pushing an insidious agenda that has as its openly articulated aim the destruction of Torah-true Judaism and traditional Jewish values in Israel.

Although this group does not have a significant constituency in Israel, as a result of their disproportionate numbers on the WZC, they can, for example, influence educational programs all over the country, either to block projects they disagree with, or to promote and fund programs that are in keeping with their progressive agenda.

In the past few months the Haredi community in the United States has mobilized itself in an unprecedented way. Previous concerns about joining a primary Zionist organization such as the WZO have been discarded in favor of participation, to ensure that the structure of Jewish life in Israel, a country that is home to roughly half of all Jews in the world, and upon whom the future of Jewish life and identity depends, is not compromised.

Haredim are being actively encouraged by their most senior rabbis in Israel and the United States to vote for the first ever WZC Haredi slate – Eretz Hakodesh – led by my dear friend Rabbi Pesach Lerner, formerly the Executive Vice President of the National Council of Young Israel, currently president of the Coalition for Jewish Values.

Fired up to fight off the threat from WZC slates backed by J-Street and other such destructive groups, the Haredi leadership has decided that after more than 120 years of sitting on the sidelines, the future of Judaism and Jewish life is too precious, and hiding in an ivory tower is no longer a viable option for anyone who cares about Jewish continuity and the safety and integrity of Jewish identity in the State of Israel – whether you are a Haredi living in Israel or a Haredi living in the Diaspora.

The festival of Purim is often painted as a Jewish victory over genocide, with Haman’s planned holocaust being miraculously thwarted by Mordechai and Esther’s intervention. But this superficial reading misses the point entirely.

Before her dangerous liaison with King Ahashveirosh, Esther appealed to Mordechai to gather together all the Jews of Shushan, without any differentiation, and to unite them into a cohesive group that prayed together and toiled together for Jewish survival. Only by joining up with each other, with all of them working for the same purpose, and addressing the crisis side-by-side with other Jews doing the same thing, could the threat from Haman be averted.

There are even opinions that view Mordechai as partly to blame for Haman’s plans, which only came about as a result of Mordechai’s extremism, namely Mordechai’s refusal to bow down to Haman, an overly zealous act, as according to Jewish law there was no problem doing so.

To be clear, the implication that Mordechai’s zealotry triggered the catastrophe is a minority opinion; nonetheless, it teaches us that self-indulgent zealotry which sets one apart from others is ultimately counterproductive.

In the end, we are all in this together, and as someone who was born and brought up in the Haredi world, seeing this seismic shift in the Haredi world has been a formative moment, and it is certainly a moment I feel we must all acknowledge and celebrate.

To modify a hardened view that has been embedded in a collective psyche for well over a century requires bravery and vision. And if it results in more unity of purpose among Jews who love Israel and care for its Jewish future, then just like the almost undetectable miracle of Purim, it is truly the Hand of God.