TAKING YOUR OWN SIDE 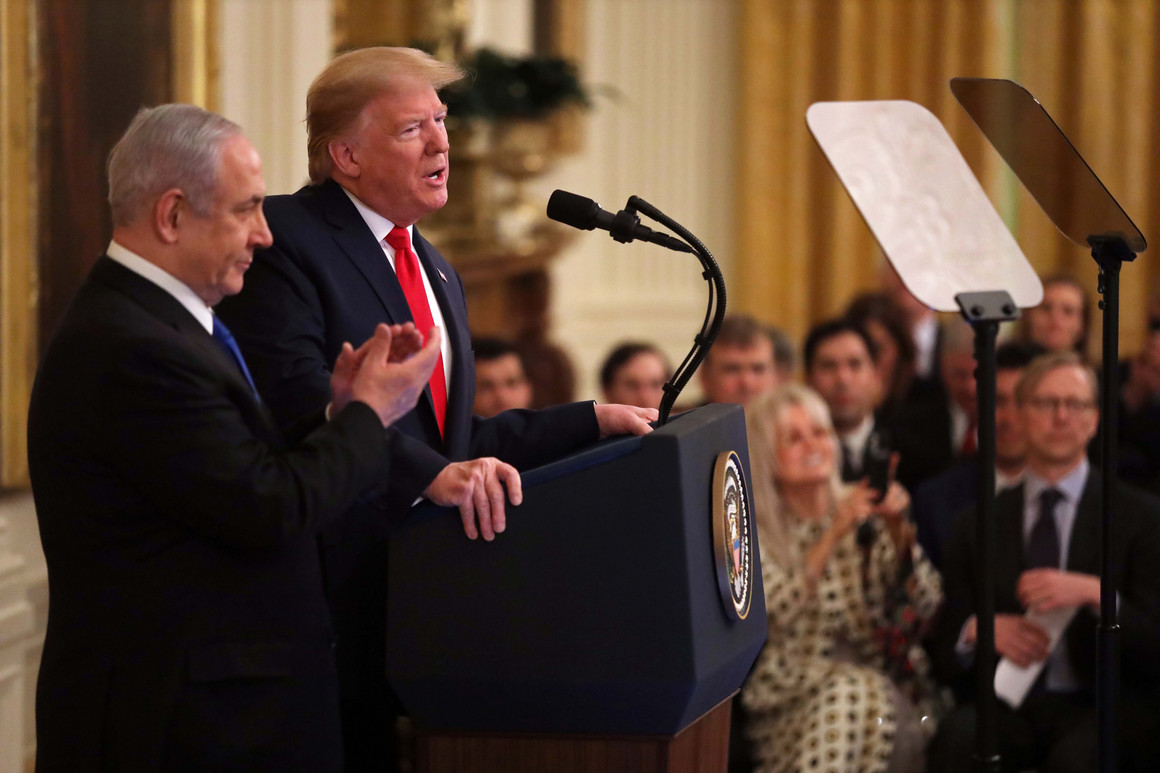 “All Muslims who come in peace will be welcome to visit and pray at the al-Aqsa Mosque.”

This statement is emblazoned on the map of a proposed Palestinian state published this week alongside President Trump’s “Vision for Peace, Prosperity, and a Brighter Future for Israel and the Palestinian People.”

A remarkable strapline for a remarkable proposal, unprecedented in modern history, and truly a reflection of Zechariah’s messianic prophecy (Zech. 8:22).

The so-called “deal of the century” offers what the document refers to as a “realistic two-state solution” alongside “a viable path to Palestinian statehood.”

Truthfully, it’s about time. After more than seventy years of statehood, and endless attempts to destroy its viability and credibility, the State of Israel deserves the opportunity to move past sullen attempts to pretend that Jewish national aspirations in the land of our heritage are a flash-in-the-pan colonialist imperialist aberration.

And yet, notwithstanding the incredible opportunity offered by this unprecedented proposal to resolve one of the modern world’s most intractable diplomatic issues, there are those – sadly including people with a vested interest in Jewish national aspirations – who have sneered at the proposal, picking at details, and trashing it before they have even considered the potential it offers for a better future for everyone concerned.

In 1961, the celebrated American poet, Robert Frost, suggested that “a liberal is a man too broad-minded to take his own side in a quarrel”. As if to order, the “pro-Israel” liberal advocacy group J-Street denounced the peace deal as having “zero chance of serving as the basis for renewed diplomacy” adding that it was “the logical culmination of repeated bad-faith steps this administration has taken to validate the agenda of the Israeli right.”

Moreover, “by endorsing Israeli sovereignty over vast portions of the occupied West Bank, the president and his team appear to be empowering Israeli leaders to carry out unilateral annexations that would flagrantly violate international law, trample on the rights of Palestinians and grossly endanger Israel’s future as a democratic homeland for the Jewish people.”

How remarkable. Arab countries with a longstanding history of hostility toward Israel – United Arab Emirates, Bahrain and Oman – sent their ambassadors to the launch ceremony of the proposed deal at the White House, while Saudi Arabia, the Middle East’s most influential Arab player, although they did not send their ambassador, expressed fulsome support for the Trump administration’s efforts.

In fact, in a published statement, Saudi Arabia encouraged the Palestinians to begin “direct peace negotiations” with Israel and urged them to accept the US administration framework as a starting point for talks to end the century-old conflict.

Robert Frost would surely be nodding sagely, saying “I told you so!” And how right he would be.

One of the most mysterious of all the plagues to afflict Egypt during the period leading up to the Exodus was the plague of darkness. The Midrash at the beginning of Beshalach comments on an unusual word used to describe the immediate aftermath of the Exodus from Egypt.

The Torah informs us that when God took the Israelites out of Egypt, He used a circuitous route through the desert, rather than directing the Israelites via Philistia, on the basis that if these newly-freed slaves were faced with war they would immediately want to return to Egypt.

That word chamushim does not lend itself to easy translation, and the Midrash consequently attempts to interpret it.

Chamushim, says the Midrash, is derived from the Hebrew word for five, chamesh, which implies that only 1-in-5 Israelites participated in the redemption.

So what exactly happened to the other eighty percent? Apparently they did not want to leave, preferring the security of slavery to the uncertainty of redemption. As a result they all perished during the plague of darkness, as the Midrash explains, to protect their dignity: “while the Israelites were burying their dead, they thanked and praised God that their enemies could not see what they were doing and rejoice in their downfall.”

These numbers make absolutely no sense. If the count of adult male Israelites after leaving Egypt was 600,000, the total number of Israelites including the elderly, women and children, must have been at least 2 million.

According to Rabbi Nehorai this would have meant there were at least 100 million Jews in Egypt before the plague of darkness, and that 98 million died and were buried there in just 3 days – a figure that defies rational comprehension. Indeed, the medieval commentator, Ibn Ezra, vigorously challenges this Midrashic interpretation, while a more modern commentary offers a solution that explains it.

The late Rabbi Shimon Schwab, spiritual leader of the German-origin orthodox community in Washington Heights NY, suggests that although “only a few people died … had they remained alive, they could have been the ancestors of millions [like them] through the generations,” implying that those who choose to reject their identity spawn descendants equally committed to their own warped worldview, thereby overwhelming those who remain true to  Jewish tradition.

I would like to suggest that even among those who emerged from Egypt, only 1-in-5 were truly committed to the destiny of the Jewish people, while the rest, when confronted with even the most trivial challenges, were only too eager to return to the fleshpots of Egypt as underdogs, rather than forge ahead as proud Jews eager to take up their national heritage as the Chosen People of God.

Those Jews who choose to reject our historical right to the land of our heritage, and who callously reject the miraculous unfolding of events which are truly biblical in nature, can comfortably count themselves among the chamushim Jews, destined to remain in Egypt, and never to emerge.

But unlike them, I am only too happy to take my own side, swelling with pride as I opt for my Jewish identity, and for the Land of Israel.