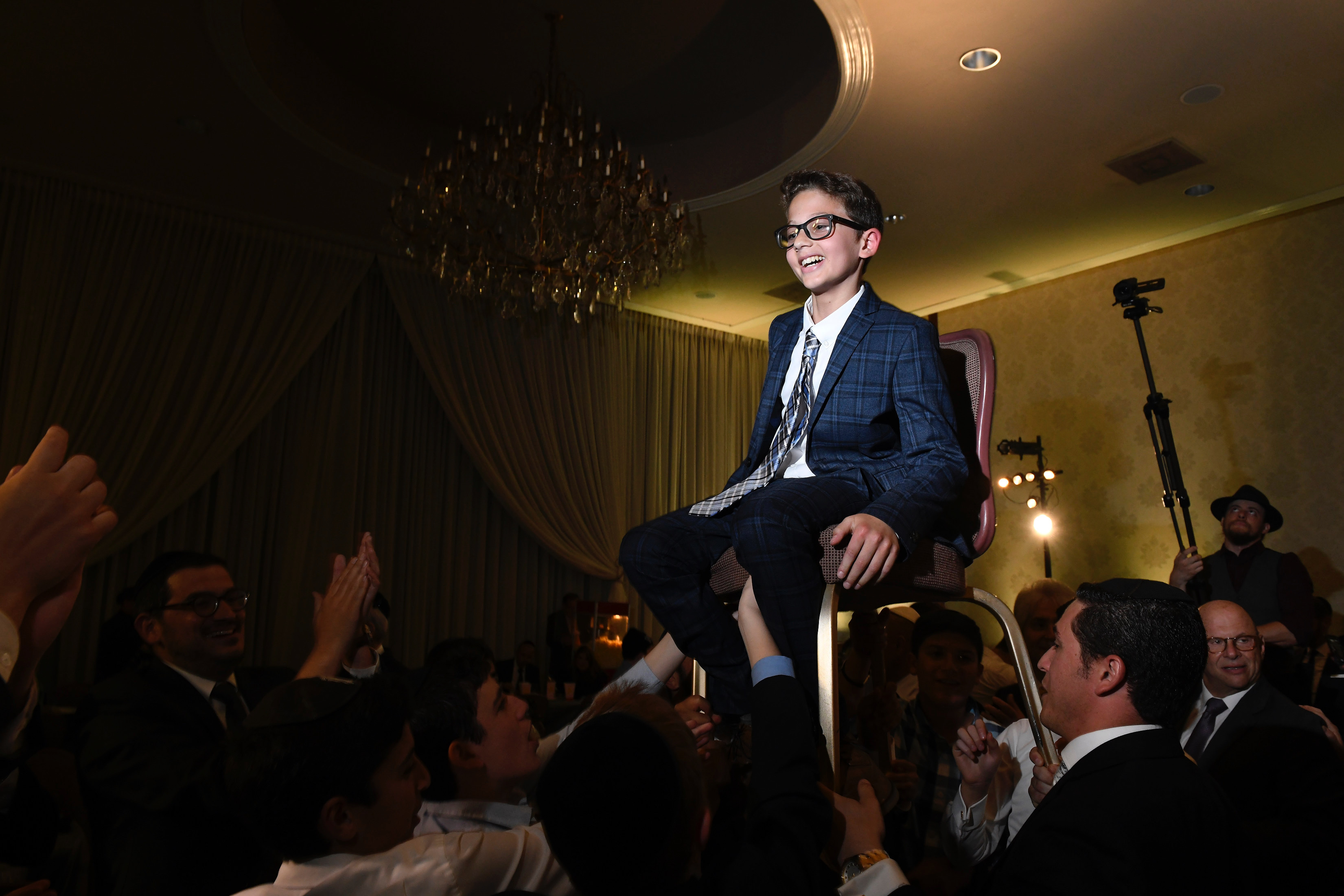 Speech delivered by Uri Dunner at his barmitzva on May 2nd, 2019.

Can a boy who turns during Sefiras Ha’omer continue to count with a ?

Tosafos in Menachos 66b quotes the Behag, who says that if someone missed counting a day of Sefiras HaOmer, he can no longer continue counting with a bracha, as the Omer count must be “Temimos” – “complete” – in other words, the full 49 consecutive days.

But Tosafos is not happy with the Behag, commenting that “what the Behag says is very puzzling and makes no sense!”

Rabbeinu Asher explains that the reason Tosafos disagrees with the Behag is that Tosafos considers each individual day to be a separate independent Mitzva. In Tosafos opinion, leaving out one day will not affect any of the others, so you can still count with a even though you missed out one day of counting.

But does the Behag really think that counting all 49 days one single ? Or does he agree with Tosafos that each day is a separate , just that “Temimos” makes each of them dependent on the other ones?

The Shulchan Aruch does not rule quite as strictly as the Behag; he says that if you are not sure if you counted yesterday you can continue to count with a today. Since there is a doubt about forgetting, and even if one forgot completely there is uncertainty about the halacha, the rule of “ – a double uncertainty – applies, and one can continue to count with a bracha.

Now back to our question about the Behag’s opinion. The Sefer HaChinuch (#306) explains that the Behag thinks that all 49 days are considered one single and missing one day will spoil everything.

The Minchas Chinuch addresses the question about a boy who lacks part of the of Sefiras HaOmer if he becomes during Sefiras HaOmer.

Despite what Sefer Hachinuch says about the Behag’s opinion, the Minchas Chinuch concludes that the barmitzva boy may still continue to recite the beracha when he becomes barmitzva in the middle of Sefiras HaOmer – and he gives a fascinating reason why.

The Maggid Mishna on Rambam Hilchos Shabbos (29:11) says that if a person brings in Shabbos early and recites Kiddush before sunset, he can continue eating after nightfall without saying a new Kiddush, even though he said Kiddush before the time Shabbos came in.

The Mordechai adds that even according to those authorities who consider adding extra time to Shabbos a Rabbinic innovation, and although we know that Kiddush on Friday night is certainly a Torah obligation, the Rabbinic Kiddush a person recites before sunset can be used to fulfill the Torah-mandated Kiddush once Shabbos comes in.

The Minchas Chinuch suggests that we can apply a similar argument for the barmitzva boy who becomes barmitzva during Sefiras HaOmer. Since a minor is required to perform Mitzvos, including Sefiras HaOmer, to fulfil the Rabbinical obligation of Chinuch – which means Jewish religious education, counting Omer prior to his barmitzva can count towards his subsequent Torah obligation to fulfill mitzvos when he becomes an adult, just like the Shabbos Kiddush before sunset can count for Kiddush after nightfall.

Therefore, although the status of the boy has changed, his situation is not the same as someone who had never counted at all, or who missed one day of Sefiras HaOmer, and he can certainly continue to count with a bracha.

The Minchas Chinuch finds it necessary to come up with this comparison as a result of Sefer HaChinuch’s understanding of the Behag. If one assumes that all 49 days are one single Mitzva it becomes necessary to combine a Rabbinic Mitzva with a Torah Mitzva to create one “complete” Mitzva out of 49 days beginning with a pre-barmitzva boy, and ending with him becoming an adult.

However, if we interpret the Behag’s requirement of “Temimos” as meaning that he counted each of the 49 days during the period of Sefiras HaOmer, it may not matter whether the pre- boy had counted or not. There are even opinions that although one should count every day of Sefiras HaOmer on the actual day if you left out one day, the following day you can count with a bracha, and say “yesterday was x and today is y” — and that’s totally fine.

The Magen Avraham quotes the Mordechai who says that pre-sunset Rabbinic Kiddush counts for Shabbos after nightfall, but disputes the ruling based on the Halacha that a minor cannot exempt an adult from Bentching by reciting Birkas HaMazon aloud for them.

In Berachos (48b) Rashi writes that Chinuch is an obligation of the father, not the son. According to Rashi, a minor has no Rabbinic obligation to recite Birkas HaMazon or Sefiras HaOmer; rather, it is his father who is obligated by the rabbis to educate and train his son by making sure he does those before his .

For this reason, Maharam Schick says that while the Magen Avraham’s challenge to the Mordechai from Birkas HaMazon can be resolved, what the Minchas Chinuch says about Sefiras HaOmer is not valid, as the Mitzva of counting the first half of Sefiras HaOmer was not fulfilled by the pre- boy, as when he counted Omer it was his father who fulfilled a rabbinic requirement, not him.

Nevertheless, although Maharam Schick disagrees with the reason given by the Minchas Chinuch, he still says that a boy should continue counting Sefiras HaOmer with a bracha for other reasons.

Someone who does a when he is not obligated to do that , and later on he becomes obligated, must go back and do it again.

Rav Yosef quotes Rambam Hilchos Chometz Umatza (6:3), where it says that someone who eats on Seder night at a time he is not mentally fit, but he later comes back to his senses, that person needs to eat matza again, because when he first ate matza he was not obligated.

The seventeenth century Chief Rabbi of Eretz Yisrael, Rav Moshe Ben Chaviv, writes that this rule also applies to a child under who does a and soon afterward becomes an adult.  Since when he first did the he was not obligated, it does not count. He has to do it again once he becomes an adult, and he would even need to say a new bracha.

Therefore, says Rav Yosef, since a boy who is not yet did not fulfil the of Sefiras HaOmer even if he counted with a , and since you cannot make a once you have missed even one day, a boy who becomes during Sefiras HaOmer cannot continue to count with a – even if he did not miss one day of counting with a bracha before his .

But the Torah Temimah disagrees with and offers a compelling proof.

If a non-Jew has children and later converts to Judaism, Rabbi Yochanan says he has already performed the of Peru U’revu – having children [and he does not have to have children again after he converts].

Even though at the time he had children he was not Jewish and was not obligated in that mitzva, the fact is that he did have children when he was a gentile, and this reality remains a fact even after his conversion.

Similarly, even though the pre- boy was not obligated to count Sefiras HaOmer for the days before his , the fact is that he did count every day with a — and therefore when he becomes he can continue to count on that day, and every day afterward, with a bracha.

The Munkatcher Rebbe (Minchas Elazar 3:60) gives another reason for a barmitzva boy to continue counting with a beracha. Nowadays, we don’t have a Beis Hamikdash – the Temple in Jerusalem – and Sefiras HaOmer is a rabbinic obligation, as is the bracha we say with it – mandated by the rabbis so that we remain familiar with this important mitzva for when the Temple is rebuilt, when we will once again become obligated in the Torah commandment of Sefiras HaOmer.

A pre- boy who counts Sefiras HaOmer with a bracha is also observing a rabbinic obligation called so that he will know what to do as soon as he becomes an adult.

“Are you going to suggest,” asks the Munkatcher Rebbe, “that the same rabbis who created the Chinuch obligation and the Sefiras HaOmer obligation to keep boys and adults familiar with , would suddenly step in and forbid a boy from saying a bracha for Sefiras HaOmer for some technical reason, if he did not miss the counting with a even once before his ? That makes no sense at all, and he should definitely continue counting Sefiras HaOmer with a after his !”