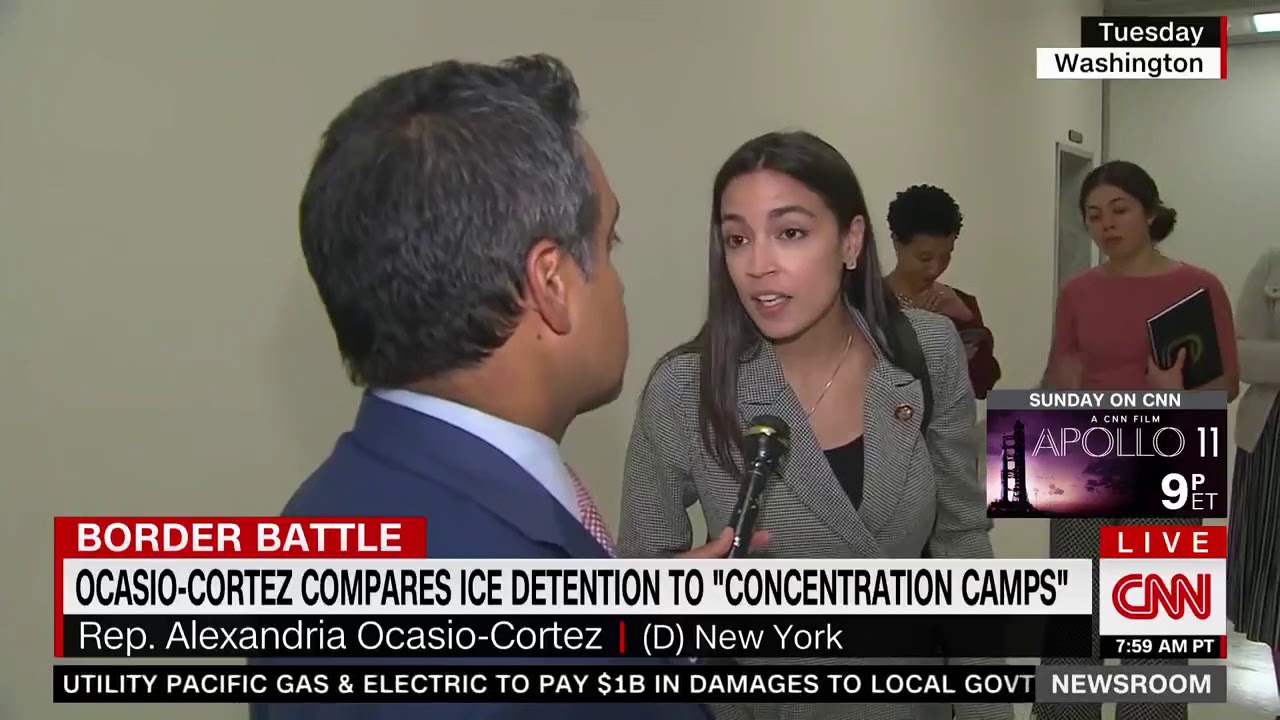 Is Alexandria Ocasio-Cortez an anti-Semite? Does she care one iota about offending Jews?

This week the freshman congresswoman was once again under fire, this time for an Instagram video she live-streamed regarding the treatment of migrants on the United States’ southern border, many of whom are confined in detention facilities while the immigration authorities try to stem the tide of illegal immigration.

Last month more than 144,000 migrants tried to make their way into the US, the highest monthly number on record.

Responding to this growing humanitarian crisis, Ocasio-Cortez declared that the United States “is running concentration camps on our southern border.”

The video quickly went viral, sending shockwaves across the country and around the world.

According to Encyclopedia Britannica, a concentration camp is an “internment center for political prisoners and members of national or minority groups who are confined for reasons of state security, exploitation, or punishment.”

Crucially, the Britannica adds that “political concentration camps instituted primarily to reinforce the state’s control have been established in various forms under many totalitarian regimes—most extensively in Nazi Germany (my italics) and the Soviet Union.”

And in case you think Ocasio-Cortez was innocently using this term, she went on to make the connection between concentration camps and the Holocaust crystal clear:

“They are concentration camps … I want to talk to the people that are concerned enough with humanity to say that … ‘never again’ means something.”

“Never again” is a slogan popularized in the closing decades of the twentieth century as the mantra of those perpetuating the memory of six million Jews killed in the Holocaust, many of whom suffered their fate after being incarcerated in Nazi concentration camps.

This is hardly the first time Ocasio-Cortez has upset the Jewish community. In February she spent an hour on the phone to Jeremy Corbyn, leader of the UK Labour Party, who has been dogged by accusations of antisemitism and was branded by the UK’s former chief rabbi, Lord Jonathan Sacks, as a “dangerous anti-Semite”.

Criticism was swift and included her Jewish supporters, shocked by her insensitivity. Ocasio-Cortez promised to make amends, but this latest episode demonstrates she has not her lesson.

Truthfully, unless you are Jewish, it is hard to convey just how touchy a topic the Holocaust is for Jews. It is latent in our DNA to react to any evocative imagery or language, and to imprecise moral equivalence, all seen as potential signs of an environment sliding towards indiscriminate societal antisemitism and ultimately a genocide that will target Jews while the world turns a blind eye.

We have every right to be paranoid. It has happened before, so why can’t it happen again? Hence the mantra “never again!”

Having said that, a gentile can certainly be forgiven for straying into this minefield – after all, no gentile can be expected to truly understand the existential angst of post-Holocaust Jews. Drifting into territory is not a crime if you don’t know you are being offensive.

Which means that using Holocaust-era concentration camps as a benchmark to judge current US immigration facilities on the southern border could, in certain circumstances, be judged as the innocently misjudged opinion of the uninformed.

But that all changes once the sensitivity is revealed. In response to the offensive tweet, the world’s premier Holocaust research center and museum, Yad Vashem, suggested that Ocasio-Cortez should learn about the Holocaust before invoking it to score political points.

“Concentration camps assured a slave labor supply to help in the Nazi war effort, even as the brutality of life inside the camps helped assure the ultimate goal of ‘extermination through labor,’” the museum tweeted on Wednesday.

Many others, Jews and non-Jews, from across the political spectrum, reacted with similar indignation to Ocasio-Cortez’s remarks.

And yet, despite the outcry, Ocasio-Cortez has refused to back down or apologize, trying to squirm out of the hole she has dug for herself by pretending that she used the term “concentration camp” generically, invoking the precedent of the US ‘concentration camps’ which housed Japanese internees during World War Two, and also suggesting there is a difference between “concentration camp” and “death camp” – a claim immediately rejected by the group that runs the visitors center at Auschwitz.

Just like Ken Livingstone before her, it is Ocasio-Cortez’s reaction to criticism that has revealed her true colors.

Towards the end of Beha’alotecha, Miriam told her brother Aaron that Moses’ relationship with his wife was wanting. On the face of her criticism was comfortably within the bounds of sibling norms. Both Miriam and Aaron were prophets and maintained normal relationships with their spouses; Miriam was unable to comprehend why Moses spent so little time with his wife.

The passage goes on to record God’s intervention and words of rebuke. Moses was an extraordinary person, God told Miriam, and could not be judged by normal standards, nor even by the standards of his fellow-prophets.

But the narrative does not end there, and adds (Num. 12:9): וַיִחַר אַף ה’ בָם וַיֵלַךְ – “God became angry with them and left.” This is puzzling. Why did God become angry after he had rebuked Miriam? Surely the displeasure came first?

Rabbi Obadiah Sforno offers a sharp insight. Unlike King David, who responded to rebuke by admitting “I have sinned!”, Miriam did not admit her guilt, staying silent, as if to say, “I did nothing wrong.” It was this that turned an innocent chat with Aaron into a misdemeanor, resulting in God’s anger and departure.

Whether or not the treatment of illegal migrants is wrong or inhumane, by refusing to apologize for her offensive remark Ocasio-Cortez has strayed across a red line. She may or may not be an anti-Semite, but she certainly has no qualms about offending Jews.