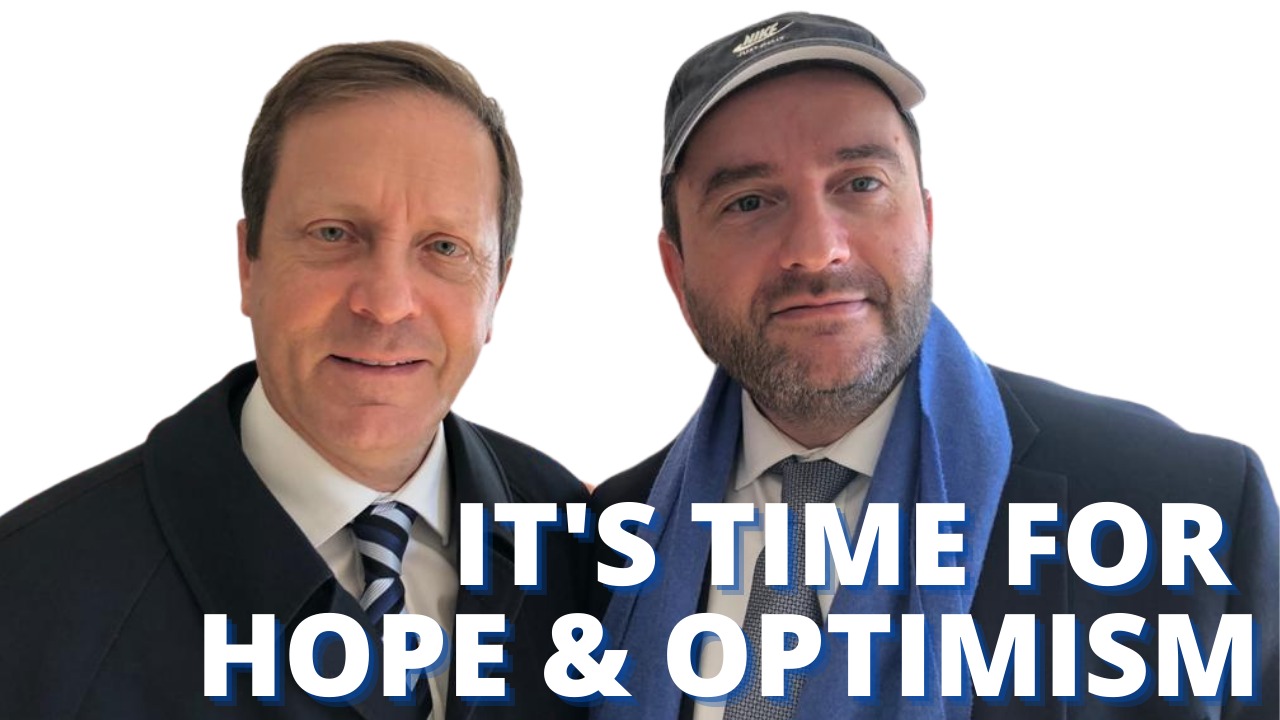 In a world full of conflict and discord, in which the very idea of representative democracy is struggling to survive an overwhelming onslaught of hostility from every quarter, it seems almost anachronistic to imagine that any election could ever again be a peaceful affair. But so it was this week, with the election of my friend Isaac “Bougie” Herzog to the presidency of the State of Israel.

It was a landslide victory – Herzog received 87 of the 113 votes cast out of 120 Knesset members eligible to vote. But rather than gloat, as might have been expected in the vindictive climate we have all become too used to, Isaac warmly commended his opponent, Miriam Peretz, best known for inspiring fellow Israelis with her positive, upbeat outlook, despite the tragic death of two of her sons in separate wars. Knowing Isaac, he will find a way to work together with her going forward, so that he can include her in his plans to unite different subgroups of Israelis and Jews – all over the world, not just in Israel.

Ironically, this all happened during a week that saw the forming of a coalition of bitter adversaries, all of them elected Israeli lawmakers – yes, the same caucus that elected Isaac Herzog – all to ensure the removal of Benjamin “Bibi” Netanyahu as prime minister of Israel. The rancor and hate which has surrounded the latest round of Israel’s political shenanigans has exceeded all previous records, and the dust has yet to settle. All of which makes Isaac Herzog’s almost uncontested elevation to Israel’s presidential role rather more remarkable.

And before you chime in to point out that the president of Israel is merely a ceremonial role with no real power, and therefore, ‘who cares?’ – may I remind you of the aphorism often misattributed to Henry Kissinger: “academic politics are so vicious precisely because the stakes are so small.”

Indeed, in 2014, after the election of Reuven Rivlin to the presidency, it was reported that his election had been “one of the dirtiest presidential campaigns in Israel’s history – two prominent candidates withdrew after being placed under police investigation [while] Rivlin was targeted by an anonymous smear video sent to MPs.”

Rivlin’s own political party – Likud – had been told not to vote for him, and Likud’s leader, Prime Minister Netanyahu, went “to extraordinary lengths to oppose Rivlin before finally giving him his lukewarm endorsement.”

The concerted effort to thwart Rivlin’s election by Netanyahu even “included a campaign to have the election delayed, or to have the post of president abolished or stripped of its only real constitutional role – determining who is first invited to form a government after national elections.” At one point, Netanyahu telephoned the late Elie Wiesel to implore him to throw his hat in the ring, apparently unaware that a prerequisite for becoming president of Israel is that you have to be an Israeli citizen – which Wiesel was not.

This week, in Israel, we were presented with two paradigms of leadership – one based on positivity and aspirational goals, the other based on negativity and the obliteration of opponents. The first is a breath of fresh and desperately needed air; the second is nothing but a recipe for collective indigestion and further friction. I know which one I prefer.

Truthfully, this choice between good and not-so-good leadership is very familiar to us, evident from the very dawn of our history as a nation. In Parshat Shlach we read about the spies sent by Moses to scout out Canaan in advance of the anticipated conquest of the Promised Land. Ten of them returned and relayed stories that fostered paralyzing fear among the nation.

The commentaries observe that these leaders sought to hold onto their power by terrorizing the populace, believing that a more optimistic outlook would diminish their control and therefore their stature. Similarly, Korach tried to create disharmony and resentment, hatred and animosity, with the clear objective of emerging as the solution to the very problems that he had himself created.

Despite the error of their ways, the early commentaries also speak very highly of both the spies and of Korach, pointing out that the spies are referred to by the Torah as anashim – “men of standing”, and as kol nasi bahem – “each one a chieftain among them” (Num. 13:2). And yet they committed a grave act of treachery, betraying those they were meant to lead with a series of self-serving narratives aimed at keeping themselves in power rather than furthering the needs and hopes of the people.

Meanwhile, Korach, says Rashi, was the brightest of men: וְקֹרַח שֶׁפִּקֵּחַ הָיָה מָה רָאָה לִשְׁטוּת זֶה – “Korach was a clever man, how did he commit this folly?” Rashi proposes an answer to this question that he bases on a Midrash, but truthfully, history is littered with superlatively clever people who end up occupying an echo chamber of self-congratulation, which results in them destroying any good they have done or could go on to do via a combination of self-delusion and hubris.

Perhaps I am naïve, but I yearn for a leadership selection system that resembles the very civilized election of Isaac Herzog, who I know will work tirelessly and faithfully for the good of Israel and the Jewish people, however limited his remit may be. He certainly won’t waste any energy seeding fear or besmirching perceived opponents.

Isaac comes from a family that has been at the forefront of Jewish leadership for generations, beginning with his illustrious great-grandfathers, Rav Shmuel Yitzchok Hillman of London and Jerusalem and Rav Yoel Herzog of Leeds and Paris. His grandfather and namesake, Rav Yitzchak Isaac HaLevi Herzog, was Chief Rabbi of Ireland and later the first Chief Rabbi of Israel. His distinguished father, Chaim Herzog, was one of Israel’s senior diplomats at critical moments in its early history and was himself Israel’s president, from 1983-1993.

But critically, notwithstanding his celebrated forebears, and just like the great leaders of Jewish history, such as Moses and King David, Isaac’s own merits more than match up to the task he has been given, irrespective of his family history. He is a man of great qualities and enormous dignity, but most importantly Isaac is a humble man who pursues peace and encourages cooperation, which in my eyes makes him most suited to his new role.

May God grant him the wisdom, strength, and good fortune that will certainly be required to ensure that the State of Israel and the Jewish people are kept safe and secure in the years ahead, and may his tenure as President of Israel be marked with bountiful blessings and the glory of God and His Torah.