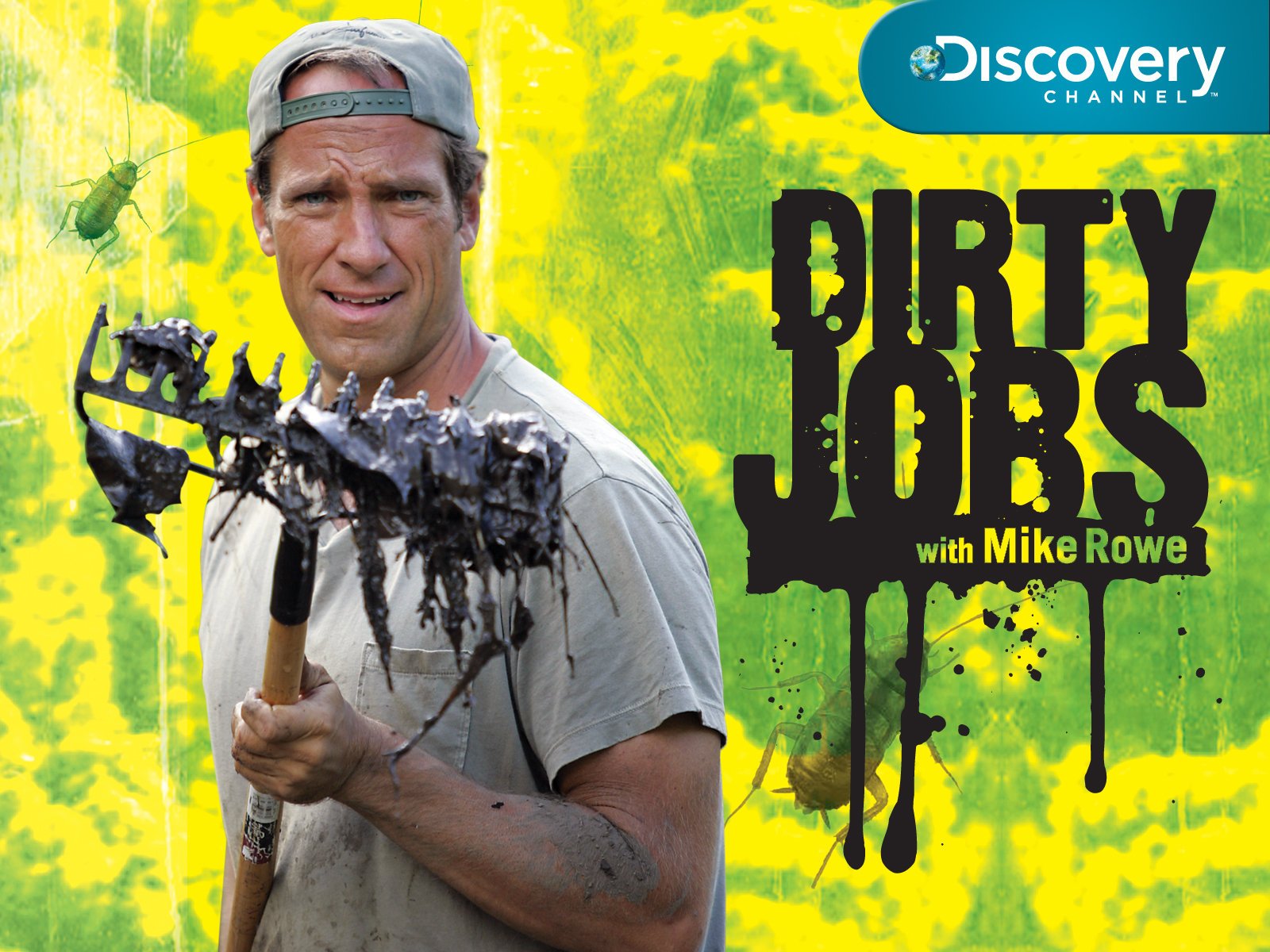 The late US Supreme Court Justice, William J. Brennan, Jr., wrote that “there are no menial jobs, only menial attitudes.”

Brennan died a few years before Discovery Channel launched its hit reality show Dirty Jobs, but he would certainly have approved.

The show, which ran from 2003 until 2012, followed its indefatigable host Mike Rowe as he carried out a range of difficult – often disgusting and messy – tasks, alongside ordinary people for whom these tasks were their everyday jobs in real life.

Introducing his role in each episode, Rowe would begin by saying “I explore the country looking for people who aren’t afraid to get dirty — hard-working men and women who earn an honest living doing the kinds of jobs that make civilized life possible for the rest of us.”

Over the course of eight series, Rowe investigated a diverse assortment of such jobs in almost 170 episodes – apprenticing himself to sewer inspectors, pig farmers, hot tar roofers, sludge recyclers, high-rise window cleaners, pest exterminators, a hippopotamus keeper, and bat-poop collectors – among many others.

Some of the jobs were so hideous that even Rowe recoiled. One episode saw him testing a “shark suit,” a steel mesh body suit made from several hundred thousand tiny metal rings, meant to protect its wearer from shark bites. Having attracted dozens of sharks by dumping a pool of blood and fish bits into the sea, Rowe jumped in.

“The sharks come in, and you let them bite you,” he later told an interviewer. “If you live, the suit works. If you don’t, it’s unfortunate.”

For Rowe this was a one-off event; for the suit’s the live test is a crucial part of the process that enables them to bring their product to market.

After the series was canceled by Discovery, Rowe was asked which had been the most difficult assignment of all. He replied that he had found “catfish noodling” (don’t ask!) very challenging, although “for epic, monumental dirtiness, the bat cave wins.” But he then revealed that in terms of “pure exhaustion”, indoor demolition and being a house mover were the jobs he had found most challenging of all.

Catfish noodling and collecting bat feces can hardly be considered mainstream, but indoor demolition and house moving certainly are. Both of them are vital to the regular functioning of our day-to-day lives, along with garbage collection, sewer maintenance, animal farming and slaughter, as well as the many other unpleasant tasks we all rely upon to live our lives, but with which we have no meaningful contact. Rowe’s mission was to wake us up to this undeniable reality.

As it happens, this idea is embedded the heart of the Jewish faith. The portion of Chukkat begins with the curious phenomenon known as “para ”. A red-haired cow was burned, and the ashes were later used in a carefully choreographed ritual process to purify those who had come into contact with a dead body.

Oddly enough, everyone involved in the preparation of the ashes would themselves become impure, albeit at a lower grade than those the ashes were aimed at purifying.

The commentaries all acknowledge this strange anomaly as emblematic of the unfathomable nature of this strange commandment. After all, it is exceptionally odd that the very people who ensure the purification of the impure would themselves become impure.

Or perhaps not. Perhaps the Torah is teaching us an important lesson. Perhaps, in order to fulfil God’s will and elevate the world around us, we are called upon to do a “dirty job”. Perhaps the greater good can only be served, and society can only function as it should, if we are willing to get our hands dirty.

The Talmud (Pesachim 57a) records that Issachar of Barkai, a High Priest during the late Second Temple period, would wear silk gloves so as not to get his hands dirty while he performed his ritual duties.

The passage is presented as a criticism, and the Talmud goes on to record a gruesome, unrelated event in which both of Issachar’s hands were severed by King Jannai as punishment for disrespecting the monarchy.

The implication is clear. As a public you need to get your hands dirty.

Rabbi Nachman Kahane tells the story of an ultra-orthodox Holocaust survivor from Bnei Brak whose daughter suddenly sank into a terrible depression but refused to reveal what was troubling her. Eventually she revealed what the problem was. She had never known what her father did to provide for the family and had never really thought about it until, one day, while riding the bus, she saw her father together with a group of manual laborers paving the road between Bnei Brak and Petach Tikva. She was completely devastated to discover that her father was a manual laborer and plunged into deep depression.

The girl’s father sat her down and explained that as far as he was concerned paving roads in Israel was far more honorable than the respected job he had in Hungary before the Holocaust. The road he was building would enable countless people to perform mitzvas, as it would speed up the travel time between one place and another, and consequently a part of every mitzva would be credited to him and the entire family, including her.

Last year, after many years of research, I finally pieced together the story of the Yabloner Rebbe, a Hasidic leader from Poland who abandoned his elevated position there to create a farming community of Orthodox Hasidic Jews in pre-Israel Palestine.

In a JNF pamphlet published in 1926, the author describes how this thoroughbred rabbi involved himself in every aspect of the farming village’s most mundane tasks, ensuring that the broader goals of the endeavor would be realized. The Yabloner Rebbe instinctively knew that in the pursuit of a greater good, you need to get your hands dirty.

And that, I believe, is the message of the “para ”. Sometimes we all need to do a “dirty job”. It is a rare example of “the end justifies the means.”