WHY ARE YOU COMPLAINING? 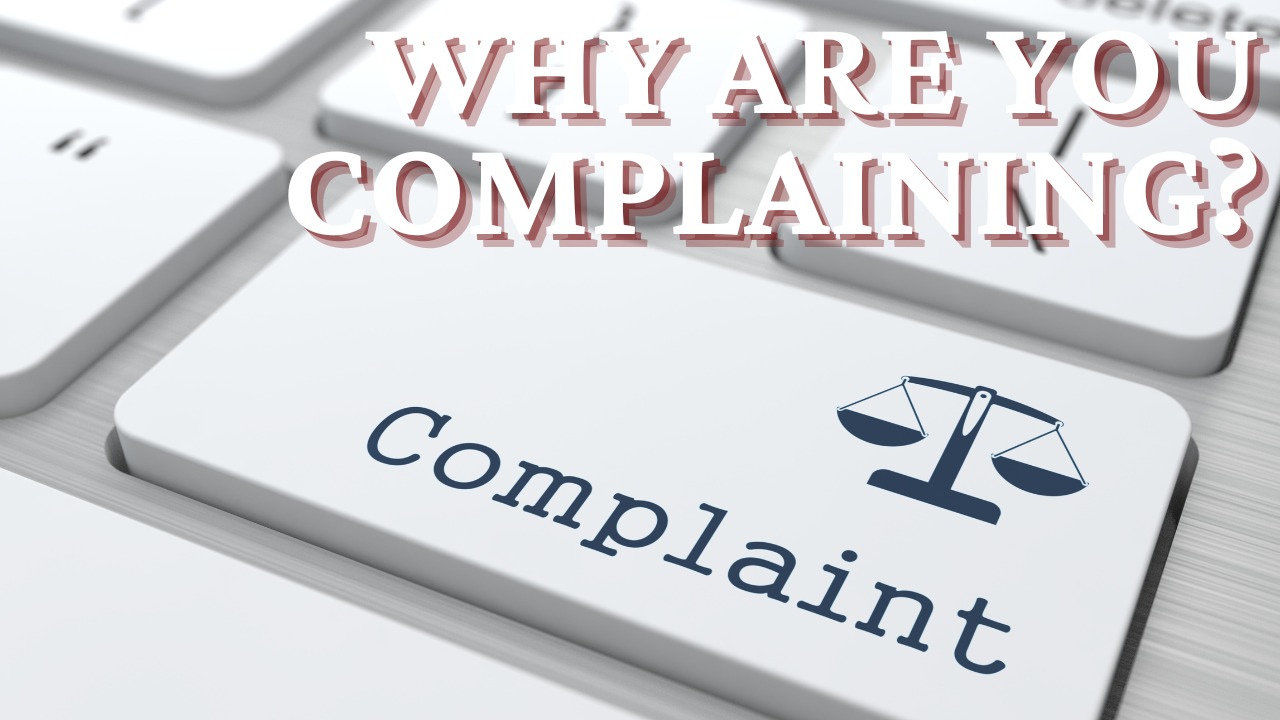 Benjamin Franklin said, “constant complaint is the poorest sort of pay for all the comforts we enjoy.” So true, but, as it turns out, complaining is not just churlish, it’s actually bad for you. Believe it or not, science has proven that complaining – or being complained to – for 30 minutes or more can physically damage the brain.

A 1996 Stanford University study revealed that regular stress affects your hippocampus, the region of your brain that is “responsible for explicit, declarative memory” – things like addresses and names. The research was carried out using MRI imaging of the human brain by neuroendocrinologist Professor Robert Sapolsky, who has focused his career on researching stress and corresponding neuronal degeneration.

In 2007, bestselling author and motivational speaker Will Bowen wrote a book: A Complaint Free World, in which he revealed that an average person complains 15-30 times a day. To compound matters, studies have shown that 4 out of 5 employees spend at least 4½ hours each week listening to coworkers grumble, and that at least 10% quit their jobs just so that they don’t have to listen to these complaining coworkers – and it is worth noting: it is the noncomplainers who quit.

Why do people complain so much? Dr. Robert Biswas-Diener – a psychologist intriguingly known as the ‘Indiana Jones of Positive Psychology’ – has written extensively on this topic. According to him there is a difference between complaining in a situation when doing so can correct matters, rather than complaining as a matter of course when things don’t work out as planned.

“There are those who never seem to be satisfied,” says Biswas-Diener. Known as “chronic complainers,” such people – and there are an awful lot of them – “have a tendency to ruminate on problems and to focus on setbacks over progress.”

In some instances, there can be constructive benefits to complaining; oddly enough, it can help us form closer relationships. In January 2020, a New York Times article quoted the psychotherapist author of “Constructive Wallowing,” Tina Gilbertson, who believes that people deliberately and successfully use grumbling as a social tool. As she put it, “any time we are sharing emotional content with someone, that is a vehicle for bonding.” Nevertheless, “healthy” complaining can quickly become unhealthy when it takes over and becomes the dominant feature of someone’s attitude to life.

Those who incessantly complain insist that all their problems are interrelated; this is referred to as “Spaghetti Thinking.” Instead of being solution-oriented, spaghetti thinkers interweave all their problems together, resulting in an incomprehensible and irresolvable mess. If life’s difficulties are a jumble of problems, they will never be solved.

Instead, one must apply “Waffle Thinking” – a method that makes problems more manageable and less traumatic. Waffles have very clearly defined margins so that one can easily select bite-size chunks. When each problem is seen as a separate smaller problem, it destresses the situation, delineates thinking, and the need for complaining is removed.

The thing is this: spaghetti thinkers complain about problems that are not problems at all – because the real problem is them.

In Parshat Behaalotecha, we are informed of a group that the Torah refers to as mitonenim – “complainers.” Their complaints are recorded in the Torah, and they were clearly spaghetti thinkers.

Supposedly, the complainers had three issues – but in reality, they were the problem. God had miraculously enabled the nation to complete a three-day journey in just a day, but the complainers still moaned about how difficult the journey had been.

They also complained about the manna, even though this miraculous food was nutritious and available fresh each morning. “Why can’t we eat meat?” they demanded, “and we remember the fish we ate in Egypt!” Really? Was this not the same Egypt that had enslaved their nation for centuries?

Their final complaint was even more random. Earlier on, God had defined the laws of morality and relationships, proscribing marriages of close family members – a practice that was common custom for Egyptians. “Why are we burdened with these prohibitions and restrictions?” they complained to Moses, “why can’t we marry who we want?”

The complainers’ world was a mess of problems and a litany of difficulties. But was it really? These were people who had been rescued from oblivion and personally experienced divine revelation. They were offered constant protection and sustenance, by a God who had chosen them as His nation. And yet, they were miserable and dejected.

Rashi suggests that the complainers had sinned at Mount Sinai by “gazing” at God. At the time, it had been possible to dismiss their disrespect as overeagerness – a misguided attempt to feel closer to God. But now, seven months after that Sinai moment, the truth was revealed.

The boundary-crossing moment was not an act of enthusiasm, rather it was jaded over-familiarity. And, when push came to shove, the complainers had nothing positive to say about their lives or their circumstances.

Sometimes, complaints are a way of avoiding showing gratitude. When one is full of disdain, nothing anyone does and nothing good that happens will ever elicit a positive response. Complaining and negativity are the default – because then you don’t have to acknowledge the good in your life.

According to Rashi, the complainers were just looking for any excuse to reject God. By denying the boundless good they had already received and that they continued to receive, and by complaining bitterly about all of their “problems,” they were deflecting, attempting to justify their decision to reject Him.

Nothing has changed since biblical times. Chronic complaining is just a cover for some other deep-rooted issue that has nothing to do with any of the problems featured in the complaints. Sigmund Freud (1856-1939) put it so beautifully, when he said that “neurotics complain of their illness, but they make the most of it – and when it comes to taking it away, they will defend it like a lioness defends her young.”

The message of the mitonenim story is that for those who suffer from it – chronic complaining is the real problem. Life is good, and whatever challenges we may encounter, we can deal with them without resorting to endless grumbling.