WHEN THE LUBAVITCHER REBBE SELF-QUARANTINED FOR SEDER 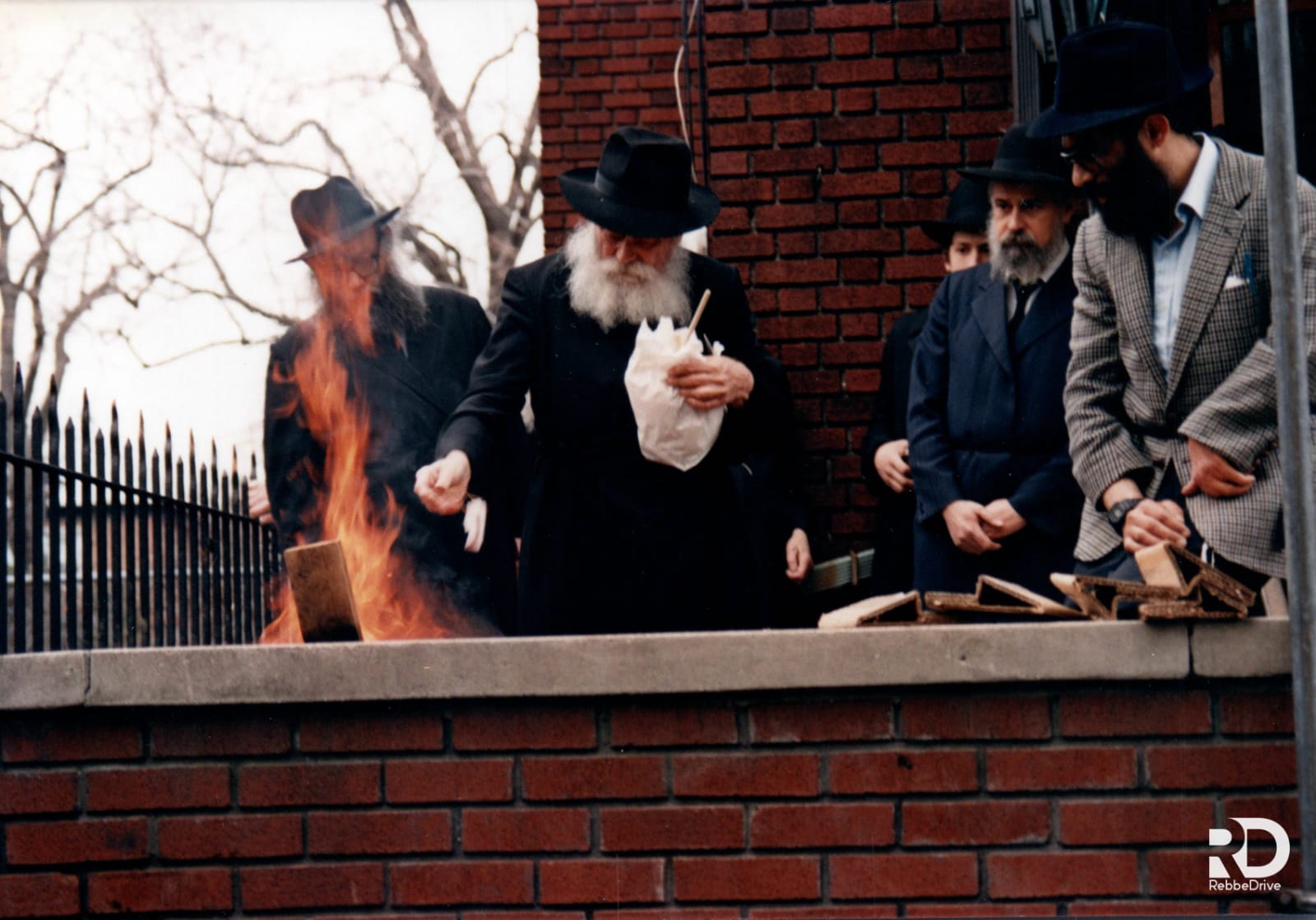 One of the issues that has been coming up again and again in the past week during phone calls I have been having with my community, and with others from further afield, is the fact that people will be on their own for the Seder this year, or their Seder will be drastically reduced in numbers, with children or parents elsewhere, all isolated in the midst of the current coronavirus social-distancing self-quarantine situation which is so important to prevent the spread of the disease.

Some people will literally be by themselves, solitary, with no one to do the Seder with at all.

“How can we do Seder by ourselves?” they ask me. “Doesn’t the Pesach Seder need to be done with family and guests?”

I have thought about this a lot, and would like to address everyone’s concerns by sharing an extraordinary conversation with you that I had about eighteen months ago.

I just happened to be in New York at the time, and a friend of mine messaged me that his daughter had become engaged. I texted him back that I was around and would be able to attend the engagement party, and that night I drove to Monsey to celebrate the simcha.

While I was at the party, I bumped into a friend of mine, Rabbi YY Jacobson, a well-known inspirational speaker on the East Coast. I knew that Rabbi Jacobson grew up on Montgomery Street in Crown Heights, in the heart of the Chabad community, just a few blocks away from the home of the late Lubavitcher Rebbe.

There is an aspect of the late Lubavitcher Rebbe’s life that I feel is often overlooked, and we got to talking about it. The Lubavitcher Rebbe was incredibly down-to-earth, and, together with his late wife Rebbetzen Chaya Mushka, the Rebbe led a very simple life. Indeed, as hard as it may be to believe, their life together was very private.

Rabbi Jacobson often tells stories about the Rebbe when he speaks to audiences, so I asked him if he ever focuses on this particular aspect of the Rebbe’s greatness. Namely that the Lubavitcher Rebbe had no airs and graces at all, nor was he interested in the pomp and ceremony that is often the hallmark of other Hasidic leaders and ‘courts’.

“For example,” I asked Rabbi Jacobson, “do you ever tell audiences that in their sixty years of marriage, the Rebbe and his wife ate every Shabbes meal together on their own? No guests, no attendants, no public spectacle… just a married couple eating together – bringing the food in, eating, clearing the table, doing the washing up. A man who had literally tens of thousands of people at his beck-and-call! What a powerful lesson!”

Rabbi Jacobson paused for a moment, and then he smiled. “I’ve got one better for you,” he said. “A few weeks ago, I led a workshop for single mothers, and at the end of the session, I took questions from the women and encouraged them to ask any question that was on their mind. One of the ladies put her hand up, and this is what she asked me… it’s a crazy story.”

“A few months ago,” she said, “it was Pesach. The thing is, my ex-husband and I went through a very difficult breakup. After years in court over our kids, we finally settled on a shared custody arrangement, which means that we alternate Jewish holidays. This past Pesach it was my turn – my children were coming to me for Seder and I was so excited. I changed over my home for Pesach and prepared everything beautifully; it was going to be just me and the kids.”

“I was so happy about them being with me, that I told everyone: my family, my friends, my neighbors. Then, one hour before yomtov, I got a phone call from my ex – for some reason, the kids were not going to be coming. I almost fainted from shock and heartache. I was also so ashamed. I guess I could have called my parents, or I could have called my neighbors – and gone to them for the Seder. But how could I actually do that? I had told everyone my kids were coming! Truth is, I did not have the energy to even be with anyone. I felt completely and totally numb – dry and lifeless.”

“So I did the Seder by myself. On my own. It was the worst and most bitter Seder I have ever had. I just sat there crying the whole way through. Weeping. It wasn’t Pesach. It was Tisha B’Av. I did not have to eat Maror. I—my entire life!—was Maror. Yes, I went through the Haggadah and ate the Matzah; but the entire Seder took me 25 minutes.”

“Rabbi Jacobson, did I do the right thing? Did I fulfil my Seder obligation? Was it even called a Seder? Because it did not feel like a proper Pesach.”

Rabbi Jacobson told me – and believe me, as a public speaker, I know exactly what he means – sometimes your most inspirational moments in a speech are not prepared. They are a gift from God. You can prepare for hours. And then inspiration drops into your lap. Right then and there, Rabbi YY Jacobson had such a moment.

“Lady,” he said, “in 1988 the Lubavitcher Rebbe’s wife died, and he was left on his own, as they sadly had no children. She passed away in February, and two months later was Pesach. Every year the Rebbe and his Rebbetzen had Seder together, but this year he was on his own, totally by himself. Who would the Rebbe conduct the Passover Seder with?”

“I recall that a young boy, Ari Halberstam – who was later tragically gunned down on Brooklyn Bridge, in 1994 – approached the Rebbe after Maariv on the first night of Pesach and, on behalf of his mother, invited the Rebbe to his home for Seder. Ari’s family lived at 706 Eastern Parkway, just one block away from ‘770’. The Rebbe smiled at Ari, and shook his head. He thanked him profusely, but told Ari he would be having the Seder in his private office in ‘770’.”

“I was a yeshiva student at the time,” continued Rabbi Jacobson, “so I am a first-hand witness to this story. In fact, the Rebbe’s longstanding assistant Rabbi Leibel Groner offered to stay with the Rebbe, but the Rebbe sent him home to have Seder with his wife and children.”

“And so, the great Lubavitcher Rebbe – the man who inspired countless people around the world for their Seders, who personally undertook to provide a meaningful Pesach Seder for Israeli Army personnel who were on duty on the first night of Pesach via his shluchim in Eretz Yisrael – had the Seder on his own. Not one other person was present. As the Talmud says: if you are on your own, you ask yourself the ‘Ma Nishtana’ questions, and then you answer them to yourself.”

“A few of us yeshiva boys did not go home that night; we waited outside in the street – and after a couple of hours, the Rebbe opened the door to welcome Eliyahu Hanavi and recite Shefoch Chamatcha. He walked outside holding a candle and his Haggadah, said the prayer, gave us a wave, and then went back inside to finish the Seder — by himself.”

“My dear lady,” said Rabbi Jacobson, “if it was good enough for the Lubavitcher Rebbe to have the Seder on his own, trust me, your Seder was perfect!”

“He could have had his Seder with 100 people, 1000 people, or 10,000 people. He personally arranged for all the army Seders in Israel to be sponsored. He was responsible for hundreds of thousands of people celebrating Pesach on Seder night, from Kathmandu to Alaska, from San Francisco to New Zealand. But at the end of the day, he went and did the Seder on his own. He didn’t need anyone else to be close to God. He didn’t need adulation. He didn’t need validation. He sat alone and relived the Exodus from Egypt.”

“I was only 15 at the time,” concluded Rabbi Jacobson, “but despite my youth, I felt sad that the Rebbe had nobody to be with for the Seder. Why did he not invite even one person to be with him? But today, after hearing your story, I may have discovered the answer—and it is just a personal feeling. As a true Jewish leader, the Rebbe wished to empower all those souls who would ever need to do their Seder alone. He wanted them to know that their solitary Passover Seder was powerful, meaningful, and real. Jewish history and the Divine presence would dwell at their Seder just as it does at a Seder that has many people there.”

Over the past couple of weeks, as the coronavirus crisis has unfolded across the world, and the reality of our isolated situations has become ever more evident – this incredible and very moving story about the Lubavitcher Rebbe has been at the forefront of my mind.

This year, so many people – probably more people than at any other time in Jewish history – will be having the Seder on their own or without their families. All of our Seders will be diminished, and anxiety will be hovering in the air. And all of us will be thinking to ourselves – ‘is this really a proper Seder?’

I think Rabbi Jacobson’s story about the Lubavitcher Rebbe in 1988 answers that question, and it eases any doubts we may have about our impending ‘depleted’ experience. After all, “if it was good enough for the Lubavitcher Rebbe to have the Seder on his own, trust me, your Seder is going to be just perfect!”

Image: the late Lubavitcher Rebbe zt”l burns chometz on Erev Pesach; with many thanks to Rabbi YY Jacobson, who was kind enough to check through a draft of this article to ensure accuracy; wishing a Refuah Sheleima to Rabbi Leibel Groner, and also to Ari Halberstam’s sister who needs a refuah from the coronavirus – may Ari’s concern for the Rebbe that Pesach in 1988 be a zechus for her speedy recovery (Chanie Apfelbaum aka Busy In Brooklyn).