WHEN DOING NOTHING PREVENTS THE TRIUMPH OF EVIL 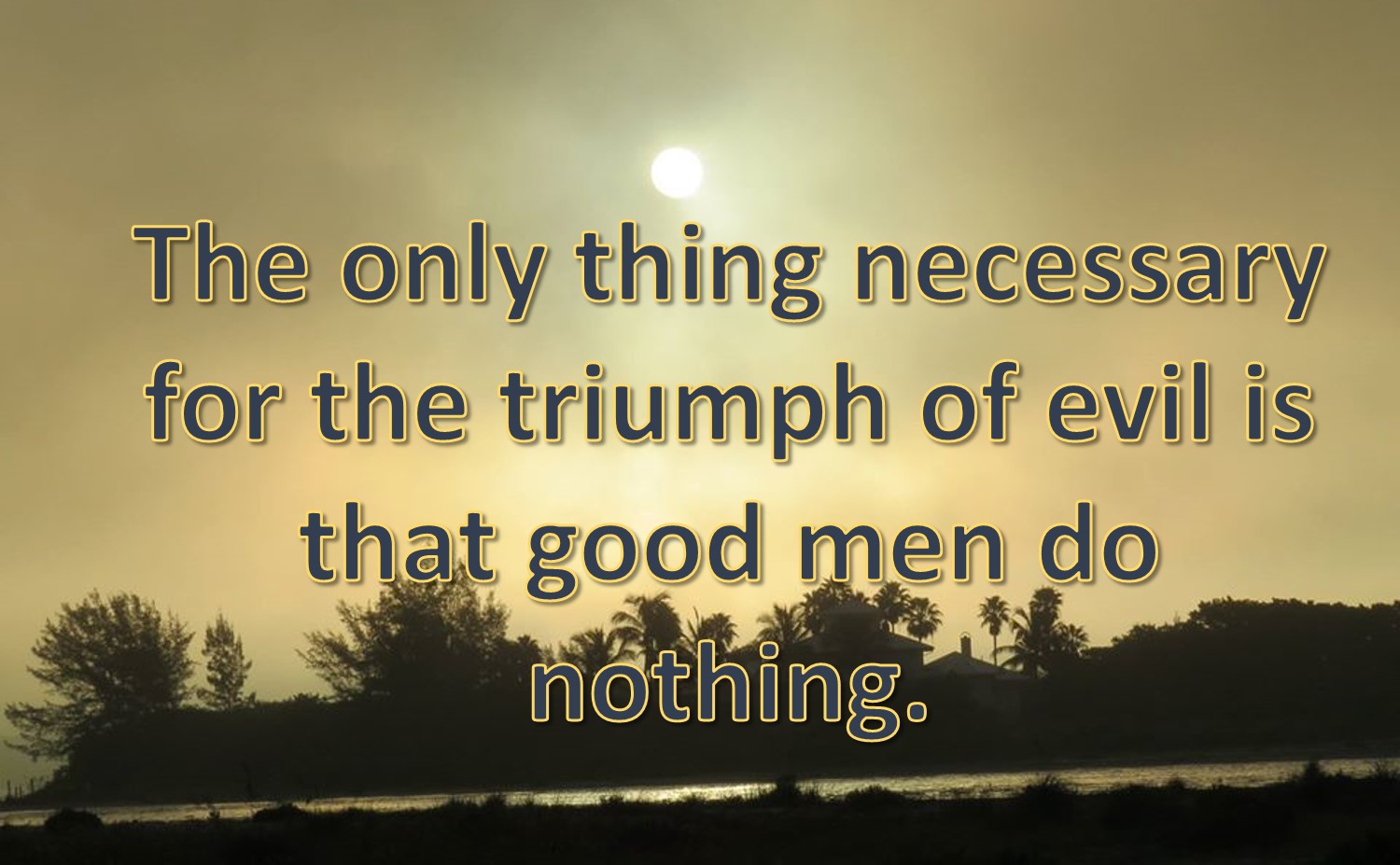 “The only thing necessary for the triumph of evil is for good men to do nothing.”

We’ve all heard that quote dozens, if not hundreds of times. More often than not it is attributed to the eighteenth-century Irish-born British statesman Edmund Burke – as it was by President Kennedy in a famous speech he gave to the Canadian Parliament in 1961.

But Burke never said it; rather it was the nineteenth-century British philosopher and political theorist John Stuart Mill in 1867:

Let no one pacify his conscience by the delusion that he can do no harm if he takes no part, and forms no opinion. Bad men need nothing more to compass their ends, than that good men should look on and do nothing.

Mill’s aphorism has since become an axiom of political thinking in the western world. We have been trained to believe that it is the duty of responsible human beings to take a principled stand when bad things are happening, or even if they might happen. Not to do so would be nothing less than a callous dereliction of our duty.

Mill’s elevated ideal has consequently been used as an argument in favor of preemptive military campaigns, and to promote a wide variety of drastic political measures aimed at righting perceived societal ills, causes that have been brought to the public’s attention via the medium of relentless lobbying.

Sadly, these interventions are often championed by unscrupulous individuals or groups, who have perfected the art of manipulating public opinion in favor of dubious ideals and ideologies, urging courses of action they spuriously claim will prevent a heinous evil.

But such special interest interventions seldom make things better; indeed, they frequently mask insidious aims or prejudices that are far more destructive than the evil they purport to be fighting.

One such cause is the longstanding campaign for a “two-state solution” as the resolution for Israel and the Palestinians. This longstanding political mantra insists that the two-state solution is the only way to resolve the fraught situation of Arab antagonism towards the existence of the State of Israel that has resulted in interminable terrorism and wars.

Supporters of this dogma believe there must be a “State of Palestine” alongside the State of Israel, in territory Israel captured from Jordan during the 1967 Six-Day War.

Decades of evidence that this idea is a fallacy has not brought people to their senses, and the United Nations along with every western democratic country, all of whom should know better, continue to actively pursue this cause without ever pausing to reflect how their activism might be producing more harm than good.

Even Israel’s supporters have joined in the endless calls for this endgame, and as recently as last week the Washington D.C. based pro-Israel lobbying organization AIPAC tweeted that it “remains fully supportive of direct negotiations leading to a two-state solution”, albeit with the rider that AIPAC is only for a “Jewish state of Israel living in peace with a demilitarized Palestinian state.”

Nevertheless, any activism that gives oxygen to this destructive fire poses a grave danger to Israel. As it turns out, it can actually be better to do and say nothing so that good people who know what they are doing – in this case Prime Minister Netanyahu and his government, along with the majority of the Israeli electorate who have ensured that Netanyahu is the longest-serving Israeli prime minister in its 70-year history – can do what they need to do, even if what they are doing is not the paradigm of perfection.

Any voice that interferes with the way Israelis run their affairs and insists on a two-state solution that involves the formal creation of terrorist-run state is not a voice that prevents the triumph of evil, rather it is a voice that enables the triumph of evil – an evil that will ultimately lead to the kind of devastation no true democrat would ever want to see, certainly not the original author of the quote.

After the destruction of Sodom and Gomorrah in Vayera, the Torah reminds us why Lot was saved (Gen. 19:29) וַיִזְכֹּר אֱלֹהִים אֶת אַבְרָהָם וַיְשַלַח אֶת לוֹט מִתּוֹךְ הַהֲפֵכָה – “God remembered Abraham, so He sent Lot from amidst the upheaval.”

The simple interpretation of this verse is that Lot was saved in Abraham’s merit, as his own merits were not sufficient.

But Rashi offers quite a different understanding of the verse. He proposes that Lot was saved on the basis of a great service he had done for Abraham many years earlier.

After encountering the famine in Canaan when they first arrived, Abraham and his family, including his nephew Lot, traveled to Egypt, where Abraham decided to hide the fact that he was Sarah’s husband in order to remain alive.

Lot, who had nothing to fear if he exposed Abraham’s misrepresentation, did not reveal his uncle’s identity, as a result of which he was later saved from certain death when Sodom and Gomorrah were destroyed.

The sixteenth century rabbinic commentator, Rabbi Elijah Mizrachi, is quite puzzled by this idea. Surely, he asks, even a person’s worst enemy would not divulge information that would result in their certain death, unless they were compelled to do so for some self-serving reason. In which case, why was Lot’s silence rewarded? He didn’t do something so special that it warranted such a glorious reward?

Rabbi Mizrachi answers that although we tend to view everything in our lives through the rubric of “action-reaction”, with benefits only accruing to those who do a worthy act, what Rashi reveals is that there is another equally important model at play.

It is not just what you do that matters; effects are of equivalent and perhaps greater importance. And if not doing something produces a greater long-term benefit, then that is the option one should take. Moreover, if the positive consequences are indeed far-reaching and meaningful, the reward will be significant, as Lot later discovered.

Sometimes, the only thing necessary for the triumph of good is for people to do nothing.