WE ALL MAKE MISTAKES 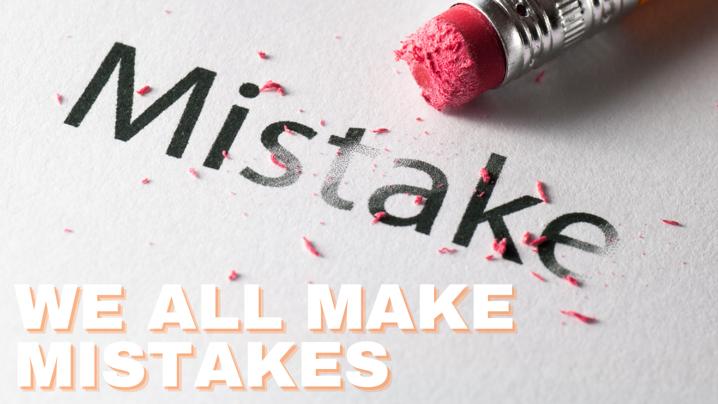 “My specialty is being right when other people are wrong!” These are the words of George Bernard Shaw (1857-1950) in his 1897 play You Never Can Tell. Shaw excelled at this particular specialty; he was always right, or so he thought, which must have meant that other people were always wrong! Although, he may well have been right when he said that “no public man… ever believes that the Bible means what it says; he is always convinced that it says what he means.”

Shaw’s combination of iconoclastic arrogance and unbridled hubris was hardly his own invention. Throughout history, the inability to admit mistakes, matched equally by an utter contempt for every person who might have a valid opinion or stake, has been the downfall of countless individuals in power and public life.

Most recently we have seen it with Vladimir Putin, and his ill-judged invasion of Ukraine. Setback after setback has forced him to redefine his goals, but not once has he acknowledged that he made a mistake when he decided to go to war with his neighbor.

This should hardly come as a great surprise. In June 2015, Italian journalist Luciano Fontana, asked Putin: “What do you consider a mistake that you would never want to make again?” Without flinching, or pausing for even a moment, Putin replied: “I will be quite frank with you. I cannot recollect anything of the kind. By the grace of God, I have nothing to regret in my life.”

The verse in Mishlei is clear (Prov. 16:18): לִפְנֵי שֶׁבֶר גָאוֹן וְלִפְנֵי כִשָׁלוֹן גֹבַה רוּחַ – “Pride comes before ruin; arrogance, before failure.” If someone thinks that they are never wrong and anyone who disagrees with them is a fool – the forecast for them is ominous. Moreover, the calamity, when it comes, is not going to be some minor event. It is going to take them down.

Modern history’s most notorious example is Napoleon Bonaparte, who famously declared that “France has more need of me than I have need of France.” His ill-fated 1812 invasion of Russia using the combined strength of the French military and the armies of its various allies ended in humiliating defeat, and its protagonist’s downfall and exile.

Napoleon’s ambassador to St. Petersberg was his faithful friend Armand-Augustin-Louis de Caulaincourt (1773-1827). Recalled to France before hostilities began, he sounded the alarm even before the troops had departed, warning that the proposed military campaign against Imperial Russia was a terrible mistake. “Puh!” was Napoleon’s scornful response.

Caulaincourt rode alongside his boss throughout the campaign, and frequently tried to persuade him to change course, especially when the freezing Russian winter loomed. But at every stage Napoleon ignored his advice. His specialty, just like Shaw and so many others, was being right. Even when he was wrong.

George Orwell (1903-1950) artfully parodied Napoleon’s greatest flaw in his masterpiece novella Animal Farm. The pig leading the other farm animals in a revolt against Mr. Jones the farmer is Napoleon, and he “is always right!” according to his most loyal supporter, Boxer the workhorse.

But as the story unfolds, Napoleon is exposed as a flawed and thoroughly disreputable character who makes terrible mistakes, and who makes things worse for his compatriots, the other animals on the farm.

The leader who must always be right, thereby driving those he leads into doom and misery, is a familiar motif in biblical narrative. The first and most dominant example is Pharaoh, the antihero of the Exodus story, whose refusal to submit to God’s request via Moses to liberate the Jewish people from slavery, results in ever-increasing levels of pain for Egypt. As the story unfolds, and the dreadful consequences of Pharaoh’s arrogance and inability to concede increase exponentially, one is left wondering, how he could be so stupid. Can’t he see the wreckage piling up around him?

At one point Pharaoh does appear to admit fault, acknowledging that he and his nation had messed up (Ex. 9:27): “I stand guilty this time. God is in the right, and I and my people are in the wrong.” But although it sounds like an admission of fault, the commentaries pounce on the qualification “this time” in the concession declaration. Right now we are in the wrong, Pharaoh was saying, but all along we have been right.

The seventh plague of fiery hail was still raging, and Pharaoh was desperate for a ceasefire. But that was all it was ever going to be – a ceasefire. As soon as the hailstorm lifted, it was back to business as usual (Ex. 9:34): “When Pharaoh saw that the rain and the hail and the thunder had ceased, he became stubborn and reverted to his guilty ways, as did his courtiers.”

At first glance, the Torah’s inclusion of every painful detail of Pharaoh’s descent into oblivion appears to be a powerful message to all the future despots of human history. Sadly, if that is the intent, it is a message rarely heeded.

After Napoleon’s Russian campaign debacle, he was deposed and exiled to Elba, an island off the coast of Italy. But rather than disappearing into obscurity, after just 11 months he escaped back to France where he reestablished control for a period known as the Hundred Days, which inevitably ended in a humiliating military defeat by the British-led army in Waterloo. Napoleon had learnt no lessons, and he never admitted to any of his mistakes.

But the Torah is not addressing Napoleon Bonaparte – rather, the message is aimed squarely at you and me: ordinary folk struggling with the day-to-day challenges of human existence. Pharaoh is the paradigm of human folly. He is the poster child of hubris and arrogance, and the devastation that such characteristics can cause. Like Pharaoh, we all have the power to shut down the plagues that affect us, most of which are self-inflicted. Instead, we act stubbornly, or we tactically deflect the plagues, only to see them return with renewed force.

True power comes from admitting mistakes and being strong enough to know that we are not always right. Only this is a specialty worth cherishing.