VENTURING BEYOND YOUR COMFORT ZONE 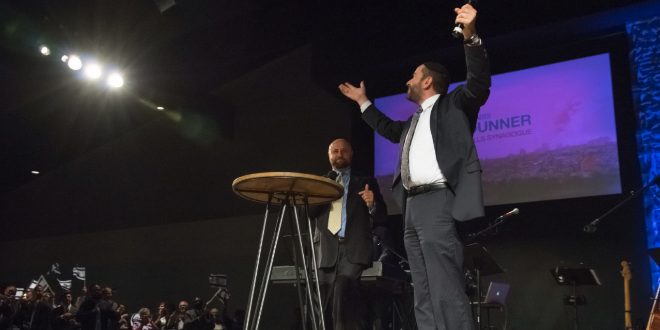 Earlier this week I visited Buffalo N.Y., where I was the keynote speaker at “Buffalo Celebrates Israel”.

This spectacular evening is a joint event organized by 22 evangelical churches in the Western New York region to reinforce and celebrate their ongoing support for Israel. The Buffalo Celebrates Israel event was not the first such event I have addressed, nor is it the first time I have encountered the fulsome, unconditional support for Israel that emanates out of the evangelical Christian community.

But this time was somehow different. My eyes were opened to an aspect of this phenomenon that was not about the dazzling support for Israel among Christian evangelicals, along with their thirst for contact with authentic Jewish tradition, although this remains incredibly refreshing and heartwarming.

Rather, as I shared Torah teachings with the many hundreds of people who attended my various talks and speeches, I was suddenly struck by the self-imposed and ultimately self-defeating limitations of parochialism that is the default safety mode of faith communities, whether they are Jewish or Christian, and how the opposite is a strategy that must be fulsomely embraced.

Let me explain. This week we read the portion of Noah, which describes how Noah and his family were rescued from the devastating biblical flood by seeking shelter in the ark, together with all the animals and birds, so that the world could be regenerated once the flood was finally over. This extremely enigmatic narrative contains a proliferation of lessons, and the rabbinic commentaries expound every one of its details to draw those lessons out.

The ‘Zohar’, which is the sourcebook of Judaism’s most esoteric kabbalistic traditions, records an exchange between God and Noah that took place shortly after the flood had ended. Shocked by the devastation he observed now that the floodwaters had subsided, Noah broke down and wept.

God’s response to Noah is utterly devastating. “You waited until now to say this? Where were you before the flood? Why did you say nothing when I told you I was planning to flood the world? Or afterwards, when I told you to build an ark? I constantly delayed, thinking to myself, ‘when is Noah going to ask for compassion for the world?’ Only now, when the world is destroyed, do you finally open your mouth to cry in front of me…”

In Judaism, Noah’s salvation is understood for what it is – a necessary segue to ensure the emergence of an Abraham, an Isaac, and a Jacob, and ultimately their descendants, a nation worthy of divine revelation at Sinai.

Although Noah was a righteous man who “walked with God”, he was willfully ignorant of the impact he could have had that would have changed the world around him. Such was his self-absorption, that even when all that he knew and cherished was on the brink of destruction, he still did not feel any need to venture beyond his comfort zone so that the annihilation might be averted.

Even the method of Noah’s salvation symbolizes this critique. Rather than giving Noah refuge on some remote island, where he would be spared the ravages of the flood, God instructed him and his family to live in the confined space of a wooden ark, battered by the rains and the wind as the flood raged outside.

As Noah and his family were invited to enter the ark, God implied His displeasure when He said (Gen. 7:1):

Rather than singling him out for his greatness, God was expressing his bitter disappointment: “you were surrounded by a society that was corrupt and broken, a society that was in desperate need of your positive influence, and yet you had no impact whatsoever. You alone are righteous, and no one else.”

What an indictment of Noah. What a failure of his potential. And so, although God had designated him for survival, because of his personal righteousness, his salvation was delivered via the medium of a cramped, unpleasant ark, and involved suffering of confinement that reflected his wanton, self-serving indifference.

We might imagine that creating our own community bubble is the best route to our survival, and that venturing beyond our comfort zones is the thin end of a wedge leading to decline and total disintegration. The jarring message of Noah’s Ark is not that God rescues the righteous from the jaws of destruction, but that being a Noah who survives in an ark is by far the inferior option. Engaging with the wider world, so that those beyond our circle can benefit from the warmth of truth and the aspirational hopes of divine values, must always be the preferred option, and opens up options you may never have thought possible.

Our greatest failure as individuals, and as communities, despite all of our many virtues, is allowing ourselves to stagnate in the comfort of our parochial echo chambers, in the belief that the world “out there” is beyond our reach. But as I have now personally observed on countless occasions, both within the Jewish world and beyond it – nothing could be further from the truth.

Everyone is within reach. All we need to do is reach out, and to keep at it. There is no need to compromise one’s value system or one’s beliefs in order to engage with those outside our ark. And rather than that ark being the vehicle of our salvation, it is nothing more than the prison cell of our own construction, a means of ensuring that we will never be God’s agents of change.