TRIBUTE TO A CONEY ISLAND SIDESHOW 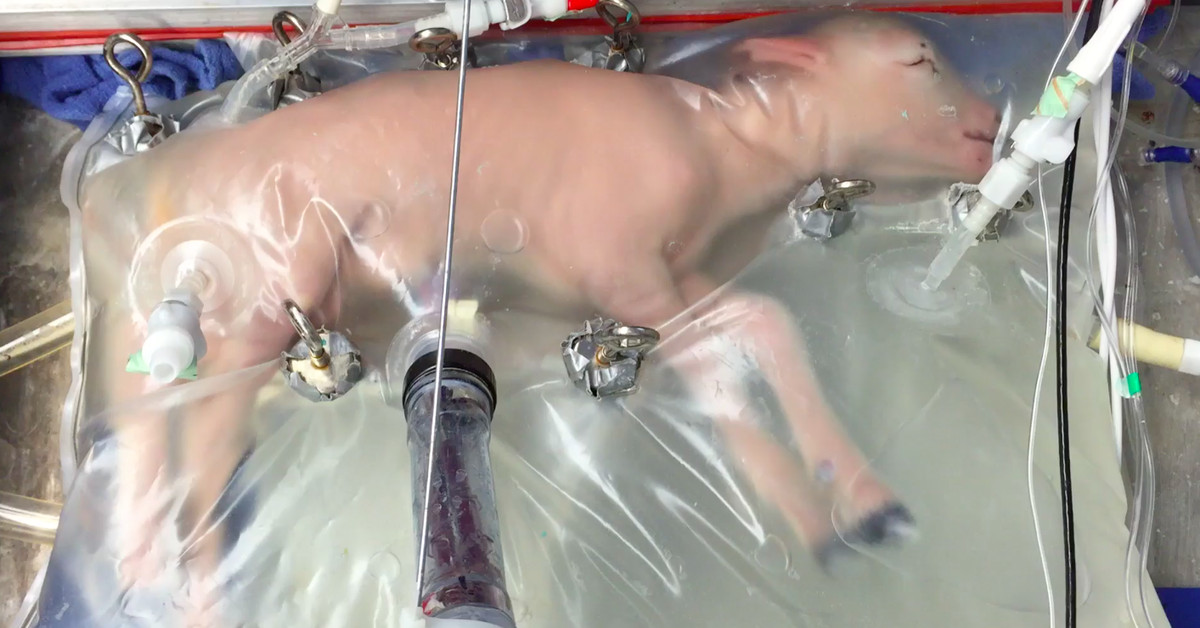 This week, a remarkable breakthrough in the field of premature childbirth was announced.

An artificial womb – a plastic sac, filled with temperature controlled amniotic fluid to mimic the mother’s womb – has apparently been successfully used in trials with premature sheep.

The team behind the new technology believes these “wombs” could soon be used to transform the lives of newborn human babies.

The details of the project seem more science fiction than real science. Lambs were “hatched” at the equivalent of 23-weeks in a human pregnancy, and kept alive in artificial wombs until they were “born” at full term, delivered out of the artificial wombs into the real world.

While floating inside the transparent sacs, the lamb fetuses developed normally, and if this technique could indeed be used for humans, it would radically improve the prospects for babies born so early in a pregnancy that they cannot breathe on their own, nor feed, or fight infection, without intensive and extremely invasive medical intervention, which scars the babies for life and often causes severe retardation.

Currently, what is known in medical terminology as the “limit of viability” — namely the earliest time during pregnancy that a newborn baby has at least a 50% chance of survival — is 24-weeks.

But the risks of serious brain damage and other potential long-term handicaps at 24-weeks are extremely high, even if the babies survive. The new technology will not only bring the ‘limit of viability’ to an earlier point, but will also reduce the long-term health complications so common in pre-term babies.

It is hard for us to comprehend that until just a century ago, the chances of survival for a baby born a few weeks early were almost zero. In the late 1870s, French obstetrician, Stephane Tarnier, invented an incubator for pre-term babies, inspired by chicken egg incubators he had seen at a farming exhibition. Suddenly, babies born too early began to survive into childhood, no different than their full-term counterparts.

Here in the United States the most outstanding premature baby pioneer was an enigmatic German-Jewish immigrant, Dr. Martin Couney, a man who may not even have been a medical doctor, but whose determination to ensure the survival of premature babies was streets ahead of mainstream medical practice.

By the time he died in 1950, Couney had helped over 6,500 babies survive life-endangering premature birth during over fifty years of dedicated work in the field.

In the early days, when most ordinary parents were unable to pay for the cost of the intensive care required to help the babies survive, Couney funded his incubator ward by setting it up as a sideshow exhibition in Coney Island, New York, with visitors paying twenty-five cents to see the miniscule babies in their individual incubators.

He was widely ridiculed, even criticized, for his efforts, and the New York Society for the Prevention of Cruelty to Children publicly accused him of exploiting the babies and endangering their lives by putting them on show.

But history judges him differently, and today Couney and his fellow pioneers are revered for their efforts.

It is serendipitous that the news of the artificial womb development was released this week, when we read in our weekly Torah portion, Tazria, of a mother’s duty to separate herself from her husband and any holy object for a prescribed period after giving birth, and then to bring a penitential offering.

I have always found these laws troubling. Surely giving birth should elevate one’s level of sanctity, not reduce it? After all, why would childbirth render a mother ritually impure, forcing her to separate from her husband and God? And why is the period of ritual impurity twice as long after a girl is born than the time required after a boy?

I don’t profess to fully understand the reasons behind our ancient laws of ritual purity and impurity, most of which do not apply nowadays, as we do not have a Temple in Jerusalem.

What I do know with great certainty is that these laws have nothing whatsoever to do with cleanliness or hygiene, nor is a ritually unclean person considered a pariah, or sinful. Rather, they are expected to separate themselves and go through a process of ritual self-cleansing that is distinctive in each situation.

The most compelling explanation for ritual impurity is that a required period of separation, along with physical acts of self-cleansing, will undoubtedly involve much time for self-reflection and introspection, creating a closer bond with God once the process of purification is complete.

Similarly, the monthly separation required by Jewish law between husband and wife compels a regular reignition of the relationship with one’s spouse, which, if managed properly, will refresh the mutual connection, creating a deeper bond with one’s life-partner.

Perhaps the lengthy ritual impurity period after childbirth is a reflection of the great stock Judaism places in procreation. Although it is no longer the case, this week’s news serves to remind us of the great risks associated with childbirth.

With medical technology having profoundly reduced those risks, we have forgotten that until very recently many women were doomed never to have children, and many that did either died in childbirth or shortly afterwards, as did their newborn children.

We are all familiar with the Jewish idea that “someone who is engaged in a mitzva is exempt from doing other mitzvot.” Could it be that God wishes for a mother who has just given birth to be devoid of any external obligations for an extended period? Is it the biblical version of mandated maternity leave?

For forty days in the case of a boy, and for double that time with a girl, God expects nothing of the mother besides for the nurturing of herself and her newborn baby. Rather than wasting time on ritual duties, or on her marital relationship, she must devote every minute to herself and her new baby.

And yet, though there is nothing more holy than ensuring a newborn child and its mother are as healthy as possible, everyone has to go back to normal life eventually, and this is marked with a penitential sacrifice — not because childbirth has sullied the mother, but because rejoining society has as an inevitable consequence a reduction of the mother’s attention to her newborn baby.

And while the mother’s attention to a baby boy is important, it is superseded by the mother’s duties to a newborn girl, who will herself one day be the mother of newborn children.