TO UPHOLD MORALITY AND INTEGRITY 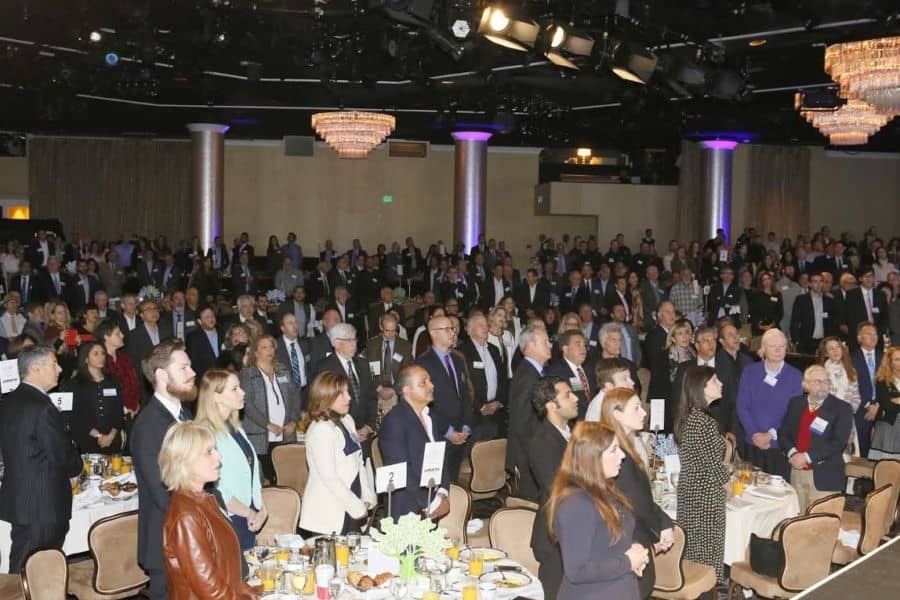 A couple of weeks ago I attended a JNF fundraising breakfast at the Beverly Hilton, along with 1,400 other Angelinos, some of whom looked a little bleary eyed at that early hour.

It was my fourth time at this annual event, and yet again I was overwhelmed at the incredible enthusiasm of American Jews for Israel, a country many have never even visited, but with which they feel a warm, unconditional affinity.

After all, only unbridled enthusiasm can explain such a large attendance for an event that early in the morning.

Or so I thought. Clearly someone at JNF thought differently, so they invited Frank Luntz to address us, as the breakfast’s keynote speaker.

Luntz, with whom you may be familiar via his regular appearance on various TV news outlets, is an unlikely fundraiser speaking attraction. Cerebral, acerbic, and well right-of-center, at first glance he would seem to be a divisive choice for the keynote at a charity event aimed at a broad audience – especially one scheduled at such an early hour.

Contrary to any such preconceptions, his presentation was an absolute breath of fresh air. It was a condensed seminar on how Israel’s supporters should communicate Israel’s message to the uninformed, or those hostile to the Jewish state.

Based on detailed research conducted using test audiences, Luntz’s overall thesis was simple. Passion for Israel’s case will never resonate if it is delivered using terminology ordinary folk find combative, or out of line with universal ideological positions associated with western democracy and freedom.

For example, when arguing against BDS, it is much better to say something like: “Boycotts do not unite, they divide. The path to peace is paved with diplomacy, discussion and cooperation, not isolation or continued conflict. Solutions come from engagement, not silence . . .” — instead of saying: “Although I understand why BDS appeals to people frustrated with Israeli policies who want to take tangible steps to end Palestinian suffering, BDS undermines progressive forces in Israel who are working for social justice.”

The idea you are conveying with the first example is that Israel as a whole is interested in peace and a negotiated settlement based on western ideals, not that Israel is a regressive nation persecuting minorities with small pockets of enlightened citizens who sympathize with external forces eager to frustrate what they perceive as Israel’s repression of Palestinians.

Similarly, when defending Israel’s response to Hamas rockets targeting civilians, it is preferable to say: “No child should have to experience the horror of a bomb shelter. No child should have to run for their life because of missiles and rockets fired on its people. And none of this needs to be happening. We have done everything possible to avoid hurting Palestinian children. Hamas has done everything possible to put Palestinian children in harms way. This madness has to stop . . .” — rather than saying: “What do you expect Israel to do? What about Israeli children not going to summer camps, forced to sit in shelters? Hamas aggression is a significant threat to a good portion of Israel.”

The first example expresses universal concern for children and civilian life, including Palestinian lives, while the second response is partial to Israel, promoting an ‘us vs. them’ attitude. Why would one presume that someone listening to a pro-Israel advocate prefers ‘us’ over ‘them’, when they probably believe all human life is precious?

Luntz’s presentation helped me understand a Talmudic interpretation of a verse in the Torah portion of Vayeitzei.

When Jacob met Rachel for the first time he told her he was אחי אביך – “her father’s brother” (Gen. 29:12). The Talmud queries this statement – Laban was Jacob’s uncle, not his brother.

The Talmud expains that Jacob was responding to a concern raised by Rachel, and was not referring to his familial relationship with Laban. Rachel was worried that her father, a notoriously manipulative swindler, would run circles around the seemingly unworldly Jacob. Reassuring her, Jacob explained that he was “her father’s brother” in subterfuge and strategy, and up to any challenge her father placed before him.

The commentaries struggle with the idea that Jacob considered himself a trickster equal to his nefarious uncle. The ancient Aramaic Bible translation, known as Targum Jonathan ben Uzziel, offers an additional word of translation which indicates that Jacob felt himself to be smart enough to anticipate Laban’s scheming, enabling him to avert any potential harm.

But even this explanation still leaves one aspect unanswered – the reference by Jacob to Laban as his ‘brother’. Surely the idea that he was unintimidated by Laban’s reputation as a villain could have been better conveyed using another word. ‘Brother’ seems to be an odd choice – it connotes affection and warmth, not equality in crookery and duplicity.

The narrative of Jacob’s relationship with Laban in the ensuing years and their final showdown twenty years later sheds light on what he meant. At no stage did Jacob ever allow himself to be drawn into a ‘me vs. him’ model of conflict. He behaved and acted in a way that epitomized a universal concern for moral and ethical behavior, while at all times remaining mindful of his adversary’s evil intent.

The focus of his efforts was not to destroy his enemy; rather it was a mission to uphold morality and integrity. In that sense he was a ‘brother’, yearning for the day Laban would give up his duplicitous ways and embrace the kind of behavior one expects of a brother.

The message of Israel conveyed by Frank Luntz, and the one which data proves is most effective, is Jacob’s mission.

Israel will never allow its enemies to be victorious, and is equal to every evil they attempt to perpetrate, but at the same time Israel always remains hopeful that its foes will one day be transformed from enemies to brothers.

Photo: JNF Breakfast attendees stand for the US and Israel anthems (Orly Halevy)