TO HEAR THE CALL OF GOD 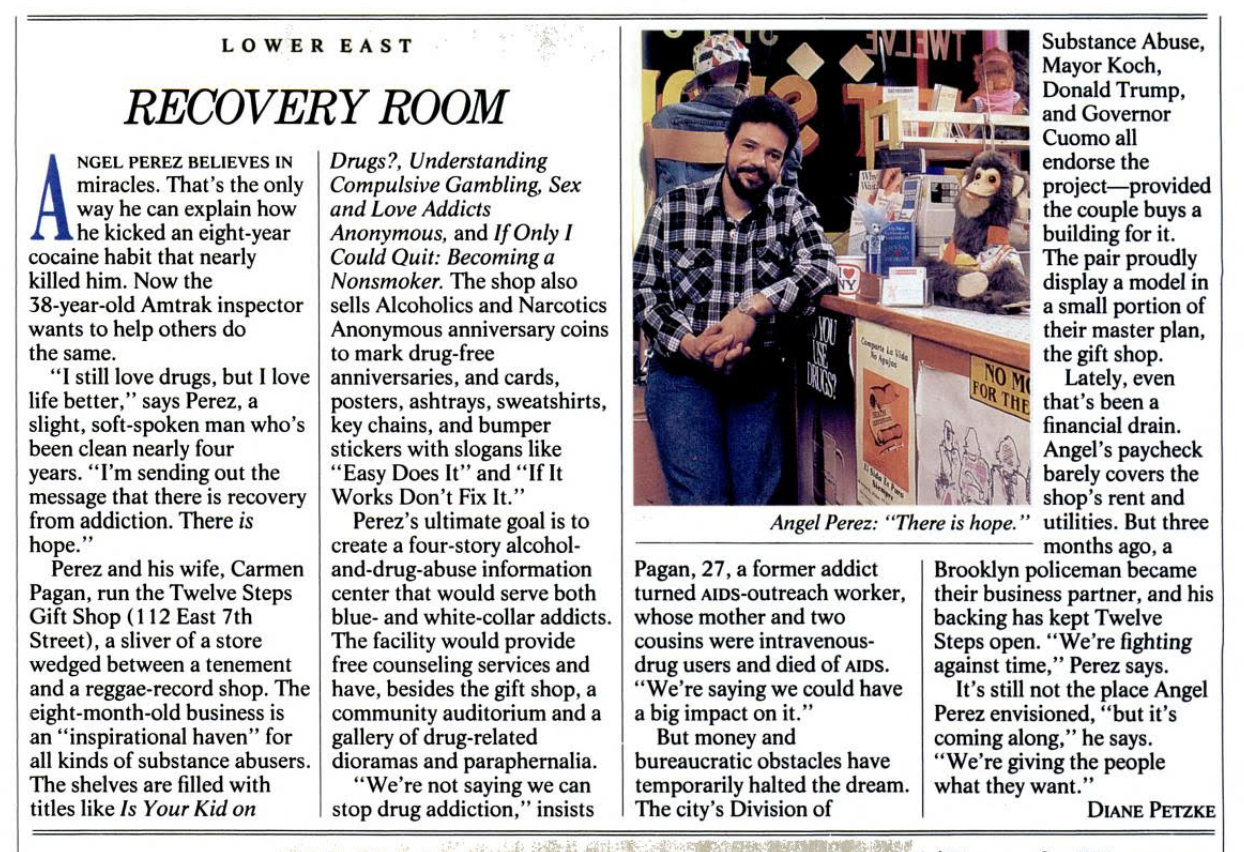 It is highly unlikely that you have heard of Angel Perez and his wife Carmen.

Indeed, until a short time ago I had never heard of them either. Moreover, what I know about them remains limited, as although what I do know is heartwarming and uplifting, the end of their story seems lost to posterity.

You may be wondering why this couple and their curious, possibly abortive idea to build a “Museum of Addiction” would have peaked my interest.

Actually, my interest in them is indirect; it is their impact on a young medical student that really drew them to my attention.

The Perezes were recovering heroin addicts who ran a tiny store in New York’s East Village during the late 1980s, selling a variety of materials to help fellow addicts into recovery.

One fine day, a 22-year-old college student who was about to begin medical school randomly entered the shop and started talking to them. As the conversation progressed, Angel and Carmen shared the details of their plan for a museum about addiction, and told the medical student of their futile attempts to elicit funds from various philanthropists to turn this dream into reality.

The young student, David Isay, was so inspired by their enthusiasm and genuineness, that he decided to help them get their story out to the media.

Isay contacted a number of TV and radio outlets, but was unable to arouse any interest — except for one tiny local community radio station. But the station did not to have a field reporter to do the interview.

So, at their request, David conducted an interview and sent in the recording.

As promised, the radio station aired the story, which was picked up by a national radio outlet. This led to more media coverage, and eventually a seed investor who helped the Perezes keep their tiny store open — and their dream alive.

Although it seems that the “Museum of Addiction” was never built, that turns out to be inconsequential compared to what happened as a result of Isay stumbling into the New York store that fateful day.

The chance meeting with Angel and Carmen Perez, and the radio station’s inability to dispatch a reporter, caused Isay to discover a calling that led him to abandon his plans to become a doctor, and instead he launched a career in journalism, with a specific interest in recording oral histories.

Fast forward thirty years, and Isay has accumulated the largest collection of such testimonies in American media history, through an organization he founded called StoryCorps, which has recorded “more than 60,000 interviews among more than 100,000 participants in all 50 states.”

Something about Isay’s conversation with the idealistic couple triggered a voice in his head that led him to embark on his true mission in life, as he readily admits in the introduction to his 2016 book, “Callings”.

Isay’s decision to abandon medical practice and respond to that voice telling him to pursue a career in social history journalism can help us understand the first few words in the Book of Vayikra (Leviticus), the third book of the Torah:

Standard translations identify the “caller” in the first part of the statement as God — “God called to Moses” — but the Hebrew is ambiguous, and God only appears by name in the second part of sentence.

The medieval commentator, Rashi, notes that only Moses heard the voice calling him. But the inference that no one else heard the voice, if it was God’s voice, could quite easily have been conveyed by the second part of the verse, though, which states quite categorically that “God spoke to him”, as opposed to anyone else.

The early Hasidic master, Rabbi Kalonymus Kalman Epstein, in his epic work Ma’or vaShamesh, poses the idea that all spoken words are limited. While they may be effective when they describe the physical world, it can be quite difficult for words to convey anything abstract.

Often it is other forms of communication that can best convey the intangible, such as love, or attention, or inspiration. The look in someone’s eyes, or the expression on someone’s face, or body language, or even something as indefinable as a ‘vibe’ – all of these can be powerful tools to communicate abstract ideas in ways that a thousand words could never manage to achieve.

Attuning yourself to these unspoken communications requires a heightened sensitivity that is acutely conscious of the non-physical world. The more embedded we are in the physical, the less likely we are to achieve this elevated level. We may even hear the call, but then dismiss it as an ethereal distraction, remaining mired in the seemingly “real” construct of the much more familiar physical world.

Our tradition teaches us that there was never a human being more attuned to this phenomenon than Moses. But that was only because he made sure to hear the call when it came, recognized it for what it was, responded to it, and went to listen to God speak to him from the tent of meeting.

Moses reached the ultimate level of awareness in terms of his spiritual side, and every aspect of his life was governed by this calling.

According to Jewish mystical teachings, there is a Moses in every generation. Perhaps this means that we must all open ourselves up to the spiritual voice within that calls out to us to break free of the oppression of material humdrum, which limits us to a predetermined life – and makes us deaf to God’s voice calling out to us.

We all know there are truths that can never be expressed using the spoken word. Listening out for those truths, and then acting on them, is possibly our greatest challenge.