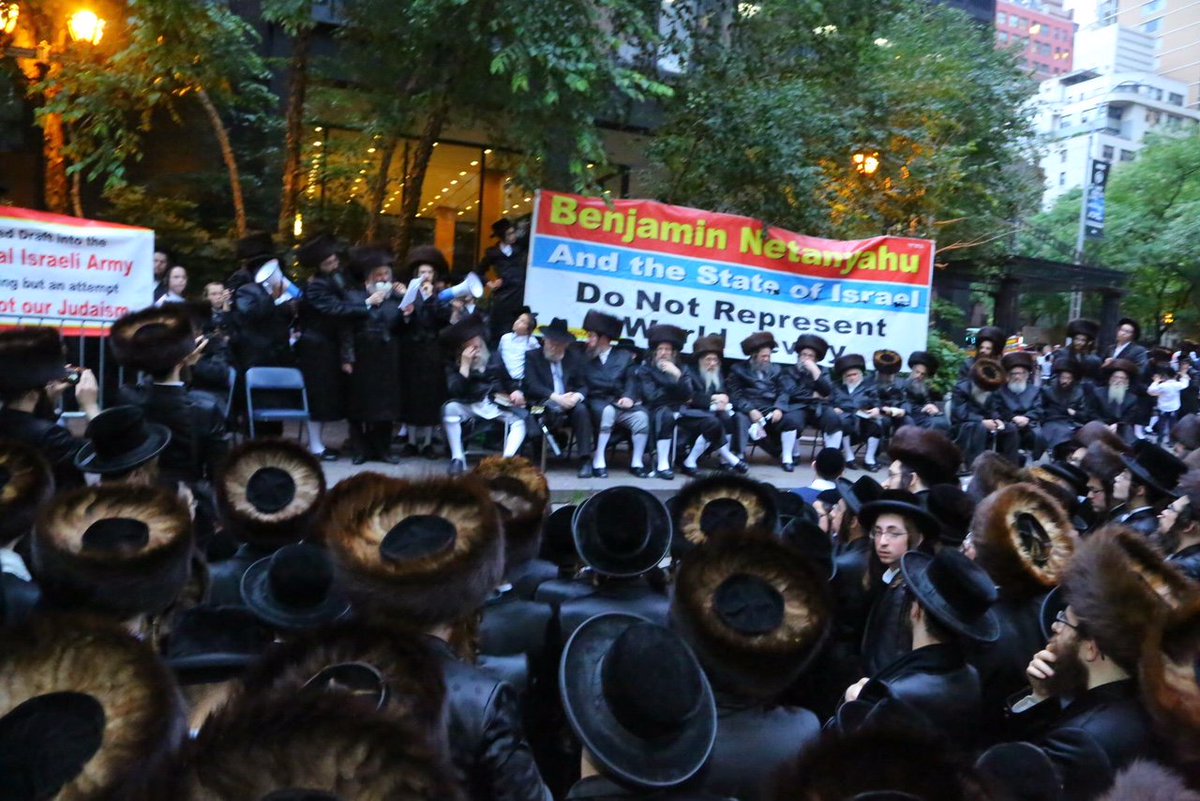 A couple of weeks ago, several hundred ultra-orthodox anti-Zionists demonstrated outside the United Nations during the intermediate days of Sukkot while Israeli Prime Minister Benjamin Netanyahu addressed the U.N. General Assembly.

The gathering of Hasidic Jews in traditional clothing, which included numerous young children, held up signs and chanted slogans such as “Israeli Nazis” and “Jews Worldwide Condemn Israeli Brutality.”

The most disturbing aspect of this outpouring of animosity is not the hostile anti-Israel rhetoric, which supporters of Israel are sadly used to. Rather it is the devout religiosity of these bile-spewing Israel-haters. How is it possible for God-believing Jews to be in such denial about the miracle of the ingathering of the exiles, and of Jewish autonomy in our ancestral homeland?

And make no mistake, these demonstrators are devoutly observant Jews who would never desecrate a Shabbat prohibition, nor eat food that is not strictly-kosher. Moreover, there were no women or girls at their demonstration, as mixed gatherings are forbidden, and all of them had no doubt attended synagogue that morning, praying fervently with their Arba Minim in honor of the festival.

The fervent devotion that marks the Judaism of these Israel-haters surpasses the Jewish observance of many Jews who support Israel, and both Jews and non-Jews find it bewildering to see overtly religious Jews display such hostility towards Israel. How does it make any sense?

At the beginning of Noach the medieval commentator Rashi offers a rather disturbing observation, regarding the reference to Noah as a “perfectly righteous man in his generation.”

“Some interpret this as praise,” says Rashi, “while others interpret it as criticism.” Those who consider it criticism question whether Noah would have been considered righteous in the patriarch Abraham’s generation. The implication of the conditional adjunctive “in his generation” is that Noah would not have matched up to Abraham’s superlative perfection, and was only able to shine because he lived in an era of miscreants.

But later commentaries query this interpretation. After all, the Torah calls Noah a “tzaddik tamim” – perfectly righteous – a phrase only used to describe the most pious of individuals. How can Noah’s critics be so cynical about his righteousness if the Torah showers him with such praise?

A little later on we are told that Noah did exactly as he was expected to. After God had told him about the destructive flood, and the need for him to build an ark, we are informed (Gen. 6:22): וַיַעשׂ נֹחַ כְּכֹל אֲשֶר צִוָה אֹתוֹ אֱלֹהִים כֵּן עָשָה – ‘Noah did everything God asked him to do, so he did.’

One commentary suggests that the extra phrase ‘so he did’ implies that in the same way Noah did everything expected of him in relation to the Ark, ‘so he did’ all the other things God expected of him, referring to the laws of morality and society, later codified as the Seven Noahide Laws.

But while this may sound like effusive praise, it is the epitome of a backhanded compliment. Everyone human being was expected to behave morally and justly, but only Noah was given the special mission to build an Ark. This was Noah’s fifteen minutes of spiritual fame – he was the man chosen by God to save humanity.

The revered Hasidic master, Rabbi Elimelech of Lizhensk, proposes an idea that adds a further dimension to this remarkable insight. Just as Noah had a unique task that only concerned his generation, each period in our history has a specific mitzvah that requires a concerted effort by the Jews of that era.

If one treats this mitzvah just the same as any other, or if one disparages it, even if one is righteous in every other way, the historic opportunity has been missed, and one is just like Noah – a perfectly righteous failure.

In Maimonides’ day he feared for the future of Judaism due to the insidious inroads made by Greek philosophy. In response he wrote a masterpiece called “Guide for the Perplexed” in which he offered a compelling philosophical backdrop to the Jewish faith.

Reading it today most of us would consider it long on content and short on relevance. If we believe in God and the Torah, we believe; if not, this book won’t change our minds. The fact is, however, that this was not a book written for our generation. Maimonides wrote the “Guide” for his era; and like an Abraham, rose to the occasion to perform a mitzvah uniquely relevant to his day.

Rabbi Moses of Coucy, who lived in the thirteenth century, was horrified by the fact that the Jews of his time – all of them devoutly Torah-observant – did not wear Tefillin. He decided to launch a campaign to correct this omission, and single-handedly ensured that the mitzvah of Tefillin was reinstated.

Nowadays such a campaign would be a waste of time; all Torah-observant Jews own and wear Tefillin. But Rabbi Moses of Coucy’s Tefillin campaign was a mitzvah uniquely relevant to his day, and he responded like Abraham.

Our unique mitzvah in the twenty-first century is to ensure the security and viability of the State of Israel, home to more than six-and-a-half million Jews, and to the most thriving and vibrant Jewish life of any period in our history since the destruction of Jerusalem in 70 C.E.

To treat Israel as if it is just like any other mitzvah would be to miss an exclusive opportunity given to us by God.

And as to those who denigrate Israel, and visibly flaunt their hatred of this modern-day miracle, even if in every other respect they are devout Jews, in reality they are just like Noah – perfectly righteous perhaps, but ultimately losers confined to their limited world, destined to be sidelined in favor of the Abrahams whose love and support for Israel will be their defining mitzvah.