THERE IS NO APARTHEID IN ISRAEL 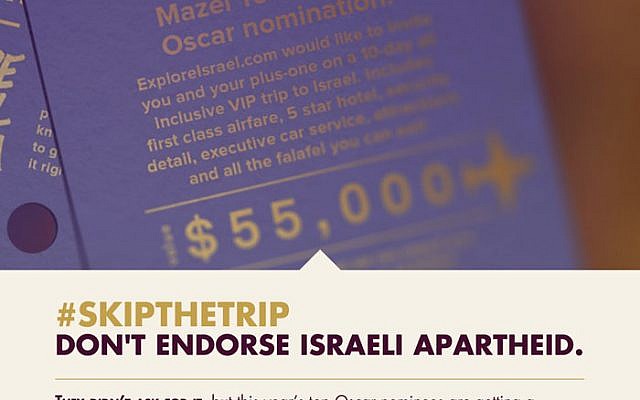 Many of us were extremely disturbed earlier this week by a full-page advertisement that appeared in Wednesday’s edition of the LA Times.

Sponsored by an organization calling itself Jewish Voice for Peace (JVP), and by the U.S. Campaign to End the Israeli Occupation, the $10,000 ad – ostensibly aimed at Oscar nominees who have been offered an all expenses paid VIP trip to Israel – refers to Israel as an ‘apartheid state’.

This same ad had previously been rejected by Variety, who explained to JVP that the “topic is too sensitive”, although this neither-here-nor-there excuse falls far short of the explanation Variety should have given JVP when they vetoed the ad.

To call Israel an apartheid state is not just a lie, it is brazen anti-Semitism. The clear aim of this provocative statement is to identify all Israelis, and Jews who associate themselves with Israel, as racists who deliberately segregate Palestinian Arabs and treat them as non-citizens, or worse, simply because they are Arabs.

That this is a lie is self-evident to any unbiased person who has ever visited Israel.

Benjamin Pogrund, a South African Jewish journalist now living in Israel, who actively battled apartheid from the 1960s onwards, has written frequently on this subject, and he is hardly an apologist for Israel. On the contrary, he feels very strongly that a solution must be found for the plight of Palestinians, and yet, although he is sympathetic to the cause of Palestinian statehood, he rejects any comparison between apartheid South Africa and contemporary Israel.

I have now lived in Israel for 17 years, doing what I can to promote dialogue across lines of division. To an extent that I believe is rare, I straddle both societies. I know Israel today – and I knew apartheid up close. And put simply, there is no comparison between Israel and apartheid.

He goes on to explain why this is so, and criticizes “well intentioned” people who fall for this comparison, and allow themselves to get sucked into a propaganda campaign run by activists who have only one intention:

[They] want Israel declared an apartheid state so it becomes a pariah, open to the world’s severest sanctions. Many want not just an end to the occupation, but an end to Israel itself.

Most strikingly, the late Nelson Mandela, unquestionably the person most identified with anti-apartheid activism, not only visited Israel, but heaped praise on its achievements – despite, as he mentioned when he was there, Israel’s earlier association with South Africa’s apartheid government.

How do JVP ‘apartheid state’ activists explain the fact that at no time during his visit, nor at any time before or after, did Mandela ever suggest or even hint that Israel was an apartheid state?

Of course he didn’t, because it isn’t. He knew that, as does anyone else who has any knowledge of what it meant to be a black in South Africa during the apartheid era.

And that is exactly the point. JVP activists are not interested in the accuracy of any historical analogy, only in the propaganda value of using such an incendiary word.

By referring to Israel as an ‘apartheid state’ they are setting the stage, they believe, for the complete collapse of Israel’s governmental infrastructure and the legitimacy of its constitution, similar to the collapse of South Africa in the early 1990s, which was precipitated by the concerted delegitimization campaign of anti-apartheid activism.

There is a very powerful message here, and it is a message that can be similarly drawn from the episode of the Golden Calf in Parshat Ki Tissa.

A careful reading of the narrative, as explained by various commentaries, reveals that the Golden Calf began as an innocent attempt to find a non-deity replacement for Moses, who had disappeared and was feared dead. One thing led to another, and the Golden Calf was the unfortunate result.

Even this, while misguided, would not have amounted to idol worship had it not been for an insidious campaign mounted by the ‘Eirev Rav’, the ‘mixed multitude’ element within the Jewish population, Egyptians who had insinuated themselves among the Jews during the Exodus.

Once the Golden Calf was formed, the Eirev Rav announced (Ex. 32:4):

‘This is your God, Israel, who brought you out of Egypt.’

How could any Jew who had been present at the Mount Sinai revelation ever have fallen for such a lie? Clearly this physical effigy was not the God who had presided over the Exodus. And yet there were Jews who fell for it, mesmerized by the deceptive allure of the Eirev Rav.

That is the danger inherent in any kind of Golden Calf, however innocent or “well intentioned.” The Jews had every reason to be concerned by Moses’ absence, and to request new leadership. Without Moses, they lacked the guidance he offered. He was their link to God, and to God’s plan for their future.

But in their haste to replace Moses they ended up with something so destructive that it almost finished off the Jewish nation before it had even beguan.

It is entirely legitimate for us to be concerned for the wellbeing of all those who fall under Israel’s jurisdiction, Jew and non-Jew alike. Even Israel’s fiercest advocates and defenders know that the situation as it stands is not perfect, and we watch as Israel struggles with this issue on an ongoing basis.

But in the headlong rush to improve matters, there are many Jews, both in Israel and beyond, who have allowed themselves to fall under the spell of the Eirev Rav, whose only objective is to dismantle the Jewish State and destroy all the good that it represents.

Our duty is to fight the ‘apartheid state’ label with every fiber of our being. No less than Israel’s survival depends on it.