THE WORM HAS A MOUTH 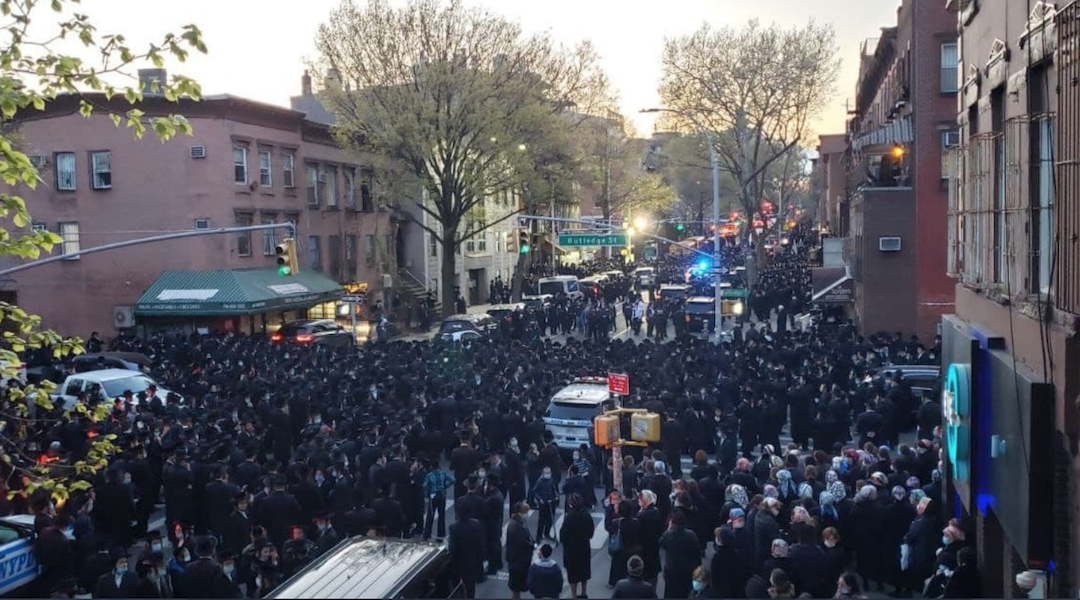 To be perfectly frank, until earlier this week I had never heard the name Rabbi Chaim Mertz. And truthfully, nor would I have heard of him had he not sadly passed away from COVID-19 on Monday, after battling the deadly virus for several weeks.

And despite the quite florid descriptions of him in various death notices, descriptions later picked up by the mainstream media, Rabbi Mertz was the unassuming rabbi of a tiny Hasidic community in Williamsburg.

In which case, you may be wondering why I am drawing your attention to this obscure rabbinic figure – especially as according to my friends in Brooklyn, the regular attendance at his synagogue each Shabbat never amounted to more than a couple of dozen men.

Well, the reason is this: despite Rabbi Mertz’s rather modest following and humble public profile, his funeral was attended by well over 2,000 people all standing in close proximity to each other, notwithstanding the social distancing guidelines currently mandated in New York.

To be fair, many of the mourners were wearing masks, but they were nonetheless compromising themselves in the face of the very infectious nature of this deadly disease.

What makes all of this even more perplexing is that the Haredi community in New York is currently reeling from a disproportionate number of COVID-related deaths – and many of those who have died were senior rabbinic leaders, including, ironically, the rabbi whose funeral these mourners were attending.

As the crowds grew at the funeral and police struggled to enforce the required distancing, New York mayor Bill de Blasio drove across from Gracie Mansion to see what was happening, perhaps hoping he could mitigate the situation via his close contacts in the Williamsburg Satmar community.

As it turned out he was unable to achieve anything useful, and he later lashed out on Twitter with a “message to the Jewish community, and all communities.” Adopting a rather stern tone, he tweeted that “the time for warnings has passed. I have instructed the NYPD to proceed immediately to summons or even arrest those who gather in large groups. This is about stopping this disease and saving lives. Period.”

His crudely worded tweet was immediately and rightly criticized by the Anti-Defamation League – among many others – as grubby political grandstanding at best, and, much more worryingly, as antisemitic dog-whistling that could lead to attacks against Jews and Jewish buildings in New York.

De Blasio later apologized, saying he had been trying to use “tough love” when speaking out against those who attended a funeral. In the meantime, Rabbi Mertz’s community issued a widely disseminated apology for the ill-advised crowding at their rabbi’s funeral.

Others within the wider Haredi community pointed out that Haredim in the tristate area were by-and-large complying with stay-at-home orders, and that all of their synagogues and schools remain firmly shut.

Before tackling the core issue at hand, let me say with reference to this particular point that while it is technically true, I am informed on good authority that at least one senior rabbinic authority has permitted rabbis to host prayers in their basements, as long as prayers are not held at their synagogues so as to avoid official interference, and many such clandestine gatherings meet daily.

This rabbinic dispensation has gone beyond a nod and a wink, and encourages Marrano-type minyanim which clearly and deliberately flout local laws, as well as firm guidance given by those who are the only ones allowed to adjudicate on matters of life and death — namely, doctors.

Such an approach is clearly unacceptable, and if anyone dies as a result of this ill-judged ruling then the responsibility will lie squarely with the rabbi who allowed it to happen.

But the point I would really like to address is this: why was it left to NYPD and Bill de Blasio to regulate an over-attended funeral? Are there no senior rabbis and community leaders in Williamsburg with a sense of responsibility for what is going on in their own neighborhood, who can speak up and assert their authority with those who are flouting rules and thereby endangering lives? Personally I think that there are, but for some reason they are choosing to hold their fire.

And rather than focusing on Bill de Blasio’s clumsy intervention, which I see as nothing more than a rhetorical distraction, a useful bait-and-switch for those who want to deflect criticism, how about focusing on the fact that strong leadership is desperately required to halt the deadly impact of coronavirus on the close-knit orthodox communities.

The “tough love” shouldn’t be coming from the New York mayor, it should be coming in spades from Rebbes and Rosh Yeshivas. I have seen innumerable rabbinic missives regarding a range of halachic and hashkafic issues thrown up by this crazy situation, but they all seem to be missing the point – your leadership has no meaning if you are not principally focused on addressing the issues that will prevent the wholesale death of those who look to you for guidance.

And let me say this – as a communal rabbi, right now what concerns me first-and-foremost is the health and safety of those who belong to my community. Our synagogue in Beverly Hills was closed before the closure of public buildings was mandated by the California authorities, and you can be sure that it will remain closed for as long as there is even a hint of doubt as to the safety of opening up a building for public gatherings.

My consistent and overriding concern is to ensure that lives are protected, and lethal risk is minimized. And moreover, I will loudly proclaim that those rabbis who look for loopholes and compromises, or who turn a blind eye to the willful contravention of lifesaving measures, are disgracing their titles and positions.

This Shabbat we will read (at home, on our own) the portion of Kedoshim, which begins with an exhortation for us to “be holy” (Lev. 19:2). In the wake of this declaration one expects a series of ritual laws and esoteric spiritual edicts that align with our understanding of the word “holy.” But what we actually get are laws which insist that we take care of the poor and underprivileged, be honest in business, be considerate and fair to others, and so on – remarkably there is nothing about davening with a minyan or attending public gatherings that might endanger others.

Of course the explanation is simple. Holiness has no meaning if we are inconsiderate towards others. And there is no greater inconsideration than the callous disregard of other people’s safety.

The late Rabbi Chaim Mertz was known, rather curiously, as the Tola’as Yaakov (‘Worm Jacob’) Rebbe, a reference to the verse in Isaiah (41:14): “Fear not, worm Jacob, remnant of Israel: I will help you — declares God — your Redeemer, the Holy One of Israel.”

The Midrash comments on this verse that although a worm appears weak and feeble, in reality it can destroy mighty objects purely via the power of its mouth.

The power of Jacob – the Jewish nation – is not in its size or strength, but in its ability to use its mouth as a powerful tool for elevating and improving the world.

The time has come for Jacob to speak up and be heard, to say loud and clear “kedoshim tiheyu” – be holy to God by preserving and protecting the precious life that He has given us.