THE WORLD’S MOST REMARKABLE FRUIT 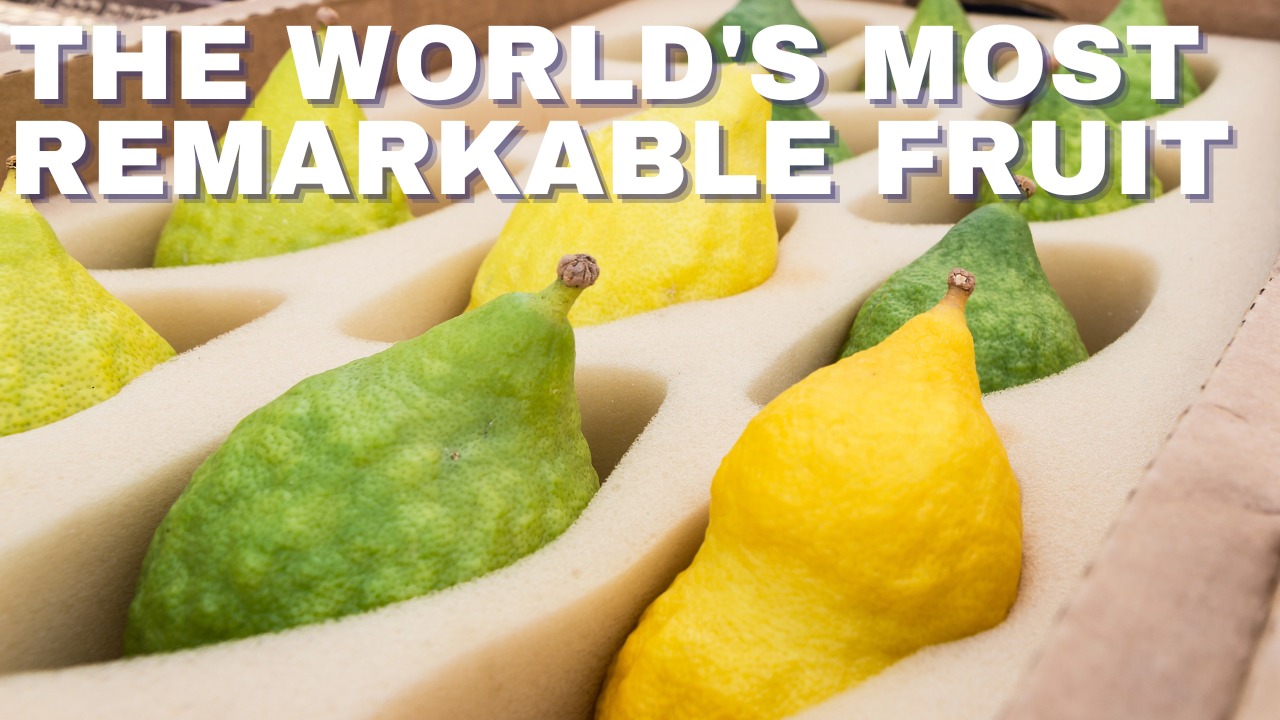 It is fair to say that the etrog fruit used by Jewish communities across the world as part of the “four species” during the festival of Sukkot is one of the world’s most remarkable fruits. Cryptically described in the Torah as pri etz hadar (literal translation: “fruit of the hadar tree”) and referred to in English as a “citron” (or by its Latin name, citrus medica), this unprepossessing member of the citrus family has long been the object of fascination for horticulturalists.

Where did it first originate? Why are there so many different iterations of citron – some that are the size and appearance of a pomelo, others that are dark green and tiny, and yet others that look like a bumpy lemon? And how are we to reconcile the various Talmudic interpretations narrowing down the options of which fruit to use for Sukkot leaving the citron as the only option?

One of the great controversies of modern rabbinic literature is whether the different available varieties of citron are purebred, or whether at some point one or another of them was crossbred with lemons or some other citrus fruit, rendering them unfit for use. Interestingly enough, until the late sixteenth century, there is no discussion regarding hybrid etrogim in any of the halakhic literature.

The Shulḥan Arukh records detailed laws about etrogim and the Four Species (O.H. 648-649), but the issue of hybridization – known in Hebrew as murkav – does not come up at all. It was only subsequent to the publication of the Shulḥan Arukh that this issue exploded onto the scene.

The controversy led to a nineteenth-century pronouncement by the rabbinic luminary, Rabbi Moses Sofer (1762-1839; “Ḥatam Sofer”), proclaiming that once an etrog plant has been contaminated by the introduction of another citrus fruit, via graft or any other method, no descendant emanating from the original etrog tree can ever be used for ritual purposes.

Rabbis were suddenly lumbered with the problem of identifying and eliminating hybrid etrogim, and they consequently suggested all manner of telltale signs to weed out the fakes – but none of these signs has ever proven entirely reliable, as Rabbi Sofer himself admitted in his responsa (O.H. 207). Etrog growers, particularly those in the Greek island of Corfu, all claimed to have the purest variety of etrog, totally beyond any suspicion of hybridization, while they denounced all other varieties as illegitimate.

And then there were those who entirely dismissed the idea that a murkav etrog was disqualified for use on Sukkot. The deeply revered kabbalist, Rabbi Shlomo Eliezer Alfandari (1826?-1930), defended the use of hybrid etrogim in his book Limmud Zekhut, going as far as to say that ordinary lemons might be kosher to use on Sukkot for the Four Species.

In 1933, Rabbi Avraham Yeshaya Karelitz (1878-1953) – universally known as the Ḥazon Ish after his magnum opus – arrived in Palestine, soon emerging as a leading halakhic authority of the era. Rabbi Karelitz was particularly appalled by the ubiquitous availability of murkav etrogim in Palestine, all of them widely promoted and used by devout Jews over Sukkot. Determined to identify the purest pedigree of etrog, he settled on a particular variety – the “balady citron” – and arranged for these to be grown under special supervision. This variety of etrog now bears his name, and is known as the Ḥazon Ish etrog.

And yet, according to at least one source – namely, Rabbi Moshe Hacohen Illovitzky, a close confidant of Rabbi Karelitz who is quoted in Pe’er Hador, the official five-volume biography of the Ḥazon Ish – Rabbi Karelitz conceded in a letter written later in life that he had been mistaken to believe he could correctly distinguish between hybridized and non-hybridized etrogim, implying he had begun to doubt the purity of his own chosen variety.

In a groundbreaking 2005 study, titled “The Search for the Authentic Citron,” five horticulturalists researched the long history of the etrog fruit, and used modern scientific methods to see if evidence of hybridization could be established once and for all, in any or all of the varieties available.

“It is well accepted that the citron was the first citrus fruit to reach the Near East and the Mediterranean,” the study begins. Archeological evidence of etrogs exists from the second century B.C.E. – surprisingly lemons and oranges only started to arrive up to 1,000 years later. The study confirms what the Hatam Sofer and the Ḥazon Ish had already conceded: “even today, with all the modern, molecular techniques, there is no way of … establishing the never-grafted nature of a citron tree.”

More stunning is the revelation that despite the prevalence of grafting throughout etrog-growing history, no doubt employed by growers to improve the strain of one or another of the varieties of etrog, “the results of the genetic analysis are unequivocal and do not leave much room for interpretation – in spite of diverse geographical origin and the considerable morphological variation in fruit size and shape, presence of pulp and persistence of style, all the citron types examined revealed a high degree of similarity.”

Rabbi Abahu in the Talmud offers an explanation for why the etrog is not specifically named in the Torah, but is instead identified as pri etz hadar (Sukkah 35b): אַל תִּקְרֵי ״הָדָר״ אֶלָּא ״הַדָּר״ דָּבָר שֶׁדָּר בְּאִילָנוֹ מִשָּׁנָה לְשָׁנָה – “don’t read it as “hadar” (beautiful), but rather as “haddar” – [namely] the object that dwells on its tree from year to year.” Indeed, whatever the time of year, there are always ripe etrogs on the citron tree, as well as others that are just beginning to form or ripen.

But I think the lesson goes far beyond that simple interpretation. If you think about it, this unique fruit – which serves no purpose other than its ritual use for Jews during Sukkot – has not only endured for millennia, but despite attempts to hybridize it into something else, the etrog has remained true to its origins, and is as pure today as when it was first identified by the Torah.

What strikes me most about this stunning piece of information is that there could not possibly be a better metaphor for the Jewish people than the etrog. After thousands of years, and despite dozens of varieties and every possible attempt to destroy or compromise Jewish identity, the Jewish people have prevailed, and the Jewish nation continues to remain utterly faithful to its origins. As it turns out, we are the ultimate etrogs of history.