THE STING OF POETIC JUSTICE 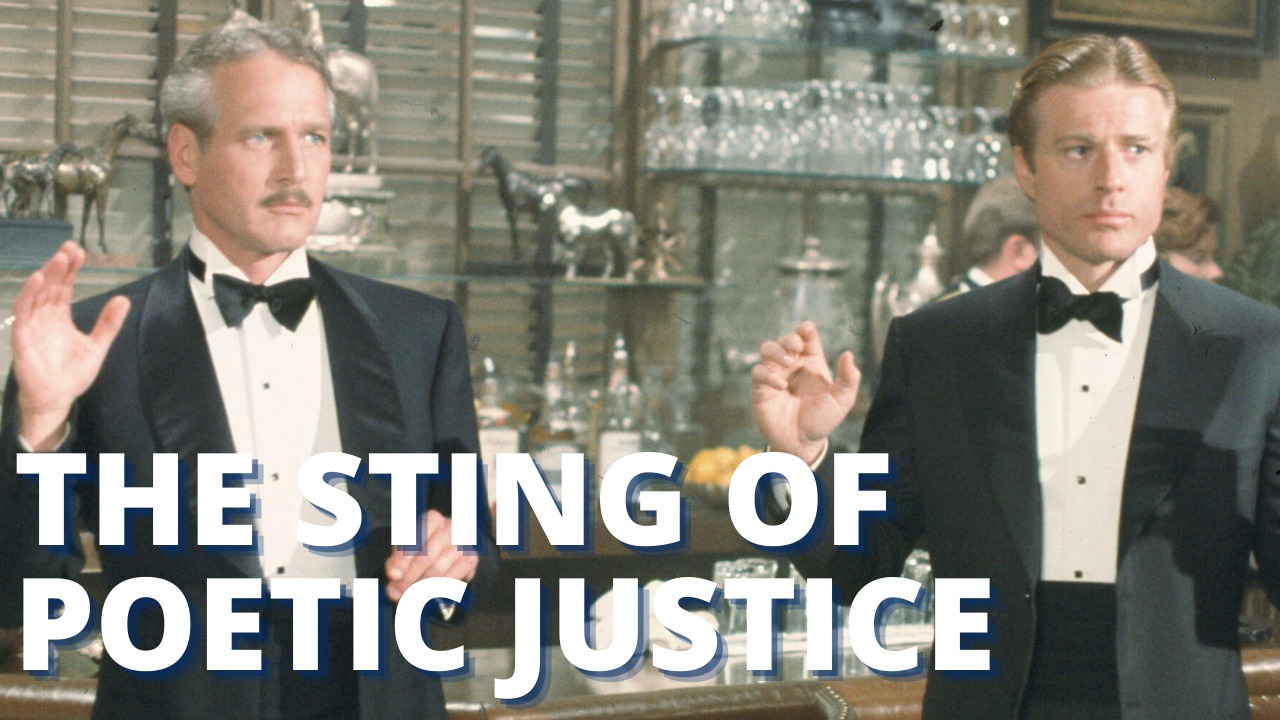 One of my favorite films as a teenager was the Robert Redford/Paul Newman classic – The Sting. It’s a complicated film, in which all the main characters are crooks. Newman is Henry Gondorff – a grifter, Redford is Johnny Hooker – another grifter, while Robert Shaw is Doyle Lonnegan – a vicious crime boss.

The final scene of the movie is spectacular, one of the great classic movie endings of all time. Lonnegan loses a half-a-million-dollar bet and is about to react, violently one presumes, when suddenly the illegal betting shop in which his bet was placed is raided by the Feds. Both Gondorff and Hooker get killed in the ensuing firefight, while Lonnegan is spirited away to ensure he won’t be involved in the fallout from the two deaths. With Lonnegan gone, the two dead men slowly get up and start smiling. Everyone cheers. It turns out that the whole thing had been a hoax staged to get Lonnegan’s money, and then to convince him that the two fraudsters were dead.

Frankly, it took me two or three times to get it. First time around I just couldn’t understand what was going on. Although, in all fairness, when I first saw The Sting I was an unworldly Talmud-studying yeshiva student. What could I possibly have been expected to know about horse races, grifters, gambling, and murder?

But on reflection, the fact that The Sting is deemed a great movie is somewhat puzzling. In 2013, the Writers Guild of America ranked it number 39 on a list of the 101 greatest screenplays ever written. But how is a movie about crooks who win considered to be one of the greatest movies of all time? To be clear, The Sting is not a film about goodies and baddies – everyone is a baddie! In theory, had Lonnegan got his money back and the other characters all been arrested – surely that would also have been a great result for justice? After all, they were crooks too! So why are we happy when they win?

Let me leave that question hanging for a moment, because I want to talk about cheating in schools. In 2015, a whole bunch of kids were indicted – charged with accepting up to $6,000 to take SAT and ACT exams so that high school students could get into college. The thing is – and we all get this – cheating on college-entrance exams is wrong. Firstly, it may entail actual theft. For example, if a student receives a scholarship due to a high grade achieved through cheating, he is essentially stealing that scholarship money.

Besides, cheating on a test constitutes deception, plain and simple – as it conveys the false impression that you know something you don’t. And yet, how do you think these exam cheats got caught? The answer is simple – through a well-organized sting. And – although, I hardly need to tell you – every sting involves deception. So how is it that a deception to expose an exam cheat is legitimate, but a deception when taking the exam is not?

The greatest deception in early Jewish history takes place in Parshat Toldot. Jacob cheats his father Isaac, and obtains the blessings meant for Esau. A dark cloud hangs over this incident. Obtained through duplicity, these valuable blessings were received under false pretenses. Let’s face it: Isaac was cheated; Jacob was a cheat; and Rebecca was a criminal mastermind. It is all rather uncomfortable.

Even stranger is the fact that Jacob is the patriarch most associated with truth, evident in the famous verse: תִּתֵּן אֱמֶת לְיַעֲקֹב – “truth is given to Jacob” (Michah 7:20). According to this prophetic pronouncement, Jacob was the standard-bearer of truth. But how is that possible? How could such a conman be a standard-bearer of truth?

And this wasn’t the only occasion when Jacob deceived someone. In Parshat Vayeitzei, Jacob cheated again, this time targeting his wily uncle Laban. We might reasonably justify his behavior, but how do we simultaneously associate Jacob with truth and integrity?

To get to the bottom of this puzzle, we need to understand why Isaac was so keen to bless Esau. It turns out that Esau was the greatest and most accomplished conman of his day. While he rampaged through ancient Canaan – philandering, thieving and murdering – he presented himself to his father as a paradigm of virtue. And in many respects, he was a wonderful son. He fed and clothed his father, and also looked after him in every respect. So it is hardly surprising that Isaac imagined Esau to be worthy of the loftiest blessings – even more than his brother Jacob.

Can you imagine if Esau had learned that Jacob had received the blessings via ordinary means? If, after all of Esau’s trickery, Isaac had nonetheless decided to give the blessings to Jacob? I think Esau might have been disappointed, but, after all was said and done, he would still have known that Jacob deserved the blessings more than him. If the story had happened that way, while it might have been upsetting, it would not have been totally devastating. So why was Esau so upset? Because he was outsmarted at his own game. That was what was so utterly devastating.

When people like Lonnegan, or exam cheats, or Esau, or Laban, lose, what is so thrilling is not the fact that these criminals have been denuded of their prize. It is that they have been denuded of their prize by honest people who played them at their own game. You think you’re a crook? Let me show you how you can be outcrooked by the people you intended to cheat. Jacob was the paradigm of truth and virtue. He had never done anything in his life that was remotely crooked, and Esau felt totally safe from him.

Esau thought he had the whole thing worked out. Having convinced his father he was the righteous brother, he sincerely believed that “honest Jacob” would never manage to outplay him. In the final analysis, it wasn’t the fact that Jacob got the blessings that upset him so much. Rather, it was the fact that he proved to be – when he wanted to be – a much better conman than Esau could have ever hoped to be. And then he went back to being Jacob.

We have an expression for that in English. Poetic justice.