THE MISTAKE WE MADE WITH RUSSIA 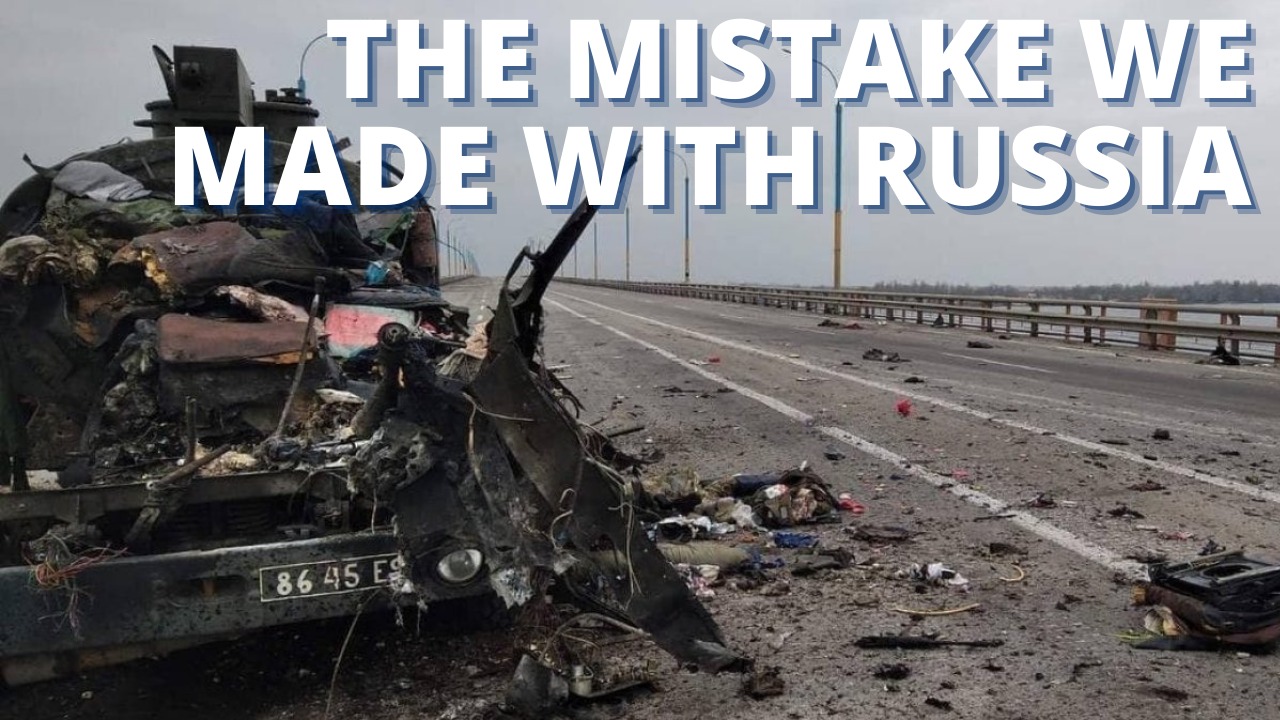 Not since the end of the 1930s has the world been in the kind of turmoil that it has found itself in over the past month, and particularly the past week. The idea that a European nation-state would invade another European nation-state in a land-grabbing act of aggression was so far off the radar, that the international community is still struggling to come to terms with it.

As recently as a couple of weeks ago, people “in the know” blithely assured us that warnings of an impending Russian invasion of Ukraine were overhyped exaggerations – Putin was just posturing in a cynical bid for concessions from the West.

Well, they were wrong. Over the past few days, untold numbers of Ukrainian civilians have been killed – as well as hundreds of soldiers on both sides – in a war that is both brutal and unnecessary. And although there have been countless military conflicts and wars since the Second World War, none has threatened the world’s equilibrium like this one. And it all happened in such a short space of time; we have barely had a chance to catch our breath as the world has suddenly been caught up in a toxic fusion of Nazi-era and Soviet-era expansionism.

As to what possessed Putin to act so rashly and belligerently – I’ll leave that for diplomatic and military experts, as well as historians, to ponder over in the future. For the moment we are simply forced to accept a reality in which Putin has precipitated an earthquake, and to try and anticipate and mitigate the tsunami that will surely follow.

One immediate outcome of this dreadful war is a European refugee crisis unlike anything seen since the end of the Second World War. According to news reports, Russia’s unremitting bombardment of residential areas in Ukraine has already forced more than one million refugees to flee.

Meanwhile, those left in cities and towns have been forced to shelter underground in basements and metro stations, while others who are unable to leave the country have fled into rural areas to avoid the brunt of mounting military attacks. One such group is Odessa’s Tikvah Jewish orphanage, for over 25 years a bastion of charity and social care for the most vulnerable elements of Odessa’s Jewish community.

Jeremy Posen is the Chief Financial Officer for the orphanage, and he flew to Odessa three weeks ago to secure arrangements in the “unlikely event of a war,” as he put it to me when we spoke. I grew up with Jeremy in London – we went to the same school and shul; he is currently a resident of Jerusalem and manages the finances of Tikvah. But right now, Jeremy is in a secret location in Northwest Ukraine, part of a group of 450 people that includes hundreds of Jewish orphans.

The group arrived at its present location after a harrowing 30-hour journey last weekend – including Shabbat – which involved zigzagging across Ukraine to avoid areas where fighting had already broken out. Despite offers to extract them via various border crossings, it has been decided that this course of action would be highly dangerous for a variety of reasons, and that staying put is the safest option.

Life for the Tikvah group is fraught, and despite two months of meticulous preparation and the protection of a top security consultancy firm, their lives are in constant danger while the future is extremely uncertain. Each day brings new challenges. “We still have some families stuck in Odessa,” Jeremy told me, “people with sick parents who can’t be moved along with pregnant women, and we need to take care of them. We are also taking care of 250 people who we managed to get out of the country and are now in Romania, and of course all the people here with us in the mountains. It is a very large, very complex operation.”

What I have been struggling to understand as each day passes is just how the world got Putin so wrong. How is it possible that this megalomaniacal despot is running amok, upending decades of European calm – so much so that earlier this week even the threat of nuclear devastation was suddenly on the table?

Since the collapse of the Soviet Union, accepted wisdom in diplomatic circles was that Russia had “lost” the Cold War, and that it had accepted – however reluctantly – that it was no longer a superpower. Additionally, Russia was eager for international recognition, which meant that there were red lines Russia would never cross – one of those being a land-grabbing war on NATO’s doorstep. The allure of peace combined with the economic benefits of globalized business would always surely outweigh any ideological or nationalist considerations.

And so, the world turned a more-or-less blind eye towards Russian-sponsored extrajudicial killings on foreign soil, the Russian invasion and capture of Crimea, and the involvement of Russia in the cyber-hijacking of US elections. The edifice of peaceful coexistence and mutually beneficial cooperation was too important, and indestructible – or so it was thought. But the truth is: no edifice is ever indestructible, however solid it may seem.

The first verse of Parshat Pekudei at the end of Shemot contains a powerful clue to the vulnerability of edifices (Ex. 38:21): אֵלֶּה פְקוּדֵי הַמִּשְׁכָּן מִשְׁכַּן הָעֵדֻת – “These are the accounts of the tabernacle, the tabernacle of the testimony.” The commentaries note that the word mishkan – “tabernacle” – is mentioned twice in the same verse, and offer a number of explanations for the repetition. One explanation, in particular, caught my eye.

This week, while in Israel, I visited the Pashkaner Rebbe, Rabbi Hoshea Friedman Ben Shalom of the Ruzhyn dynasty, who is also a retired IDF Brigadier General. As I left he inscribed and gifted me a book of Torah commentary, Ohalei Yaakov, written by his great uncle, Rabbi Yaakov Friedman (1878-1956), the third Husiatyner Rebbe.

In his commentary on this verse, Rabbi Friedman notes that the second mention of the tabernacle refers to a second sanctuary far more important than the first. A physical edifice may be impressive, but it has no enduring value if it is not upheld by a parallel equally robust spiritual edifice which elevates its physical counterpart into something much stronger.

A Midrash quoted by Rashi sees a reference in this repetition to the destruction of the two Jerusalem temples – both of them imposing structures, but neither of them underpinned by durable spiritual foundations.

The world was dazzled by the mirage of peace with Russia, for so long feared as a threat to international amity and calm. Even if Russia occasionally misbehaved, the status quo was considered stable, even permanent. But the world forgot something very important: an edifice is only ever as stable as its foundations. Peace with a country that lacks democracy, justice, and freedom of the press, can crumble and disintegrate with devastating speed, and before you know it, you’re back to where you started.

If and when this crisis is finally over, the lesson will have to be that Russia can never again be trusted as a partner in international affairs until it has properly embraced the elusive but indispensable second tabernacle. Without the footing of true democratic values, peace with Russia is a fragile edifice, and what happened this week in Ukraine can easily happen again in the future – and next time it could be you and me who will have to flee for the hills.

To donate money for the Odessa Tikvah orphanage now in hiding in Northwest Ukraine, please donate via this link: https://www.beverlyhillssynagogue.org/tikvahorphanageodessa