THE MARK OF LEADERSHIP IS OPTIMISM IN ADVERSITY 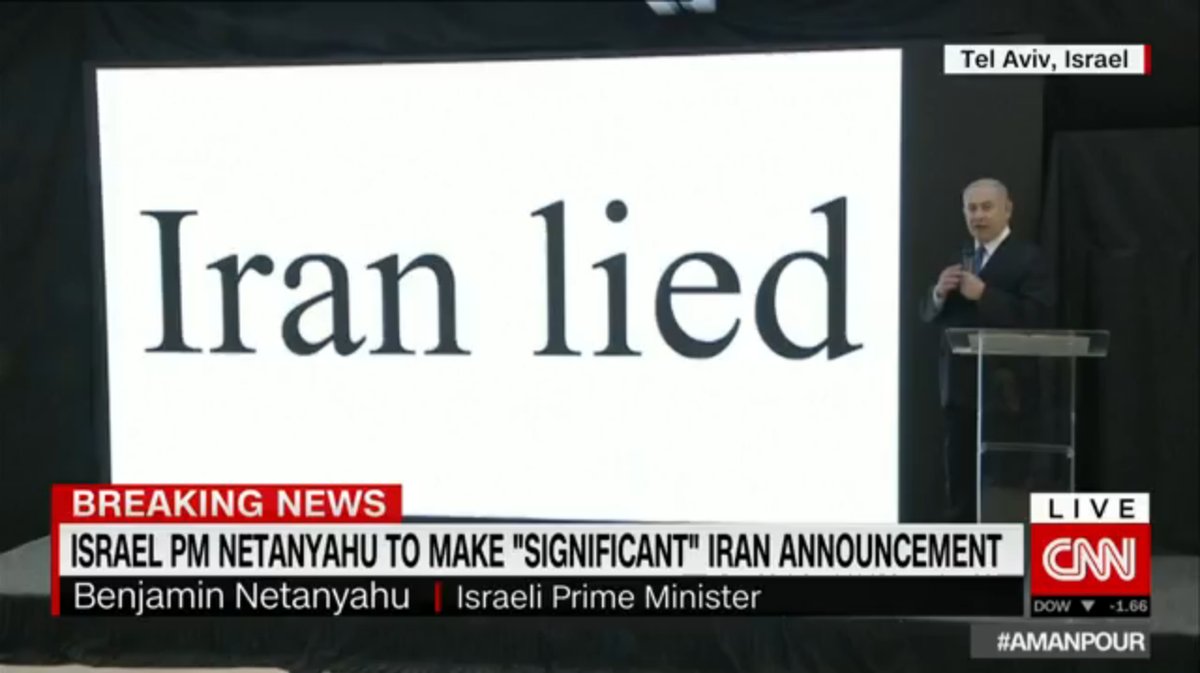 This week, we were offered two demonstrations of leadership in the face of adversity, and they could not have been more different.

On Monday, Israel’s prime minister Benjamin Netanyahu theatrically unveiled an astounding collection of secret files from Iran, obtained by Israel’s espionage agency, Mossad. The cache reveals how Iran has consistently lied in claiming that it sought only ever nuclear power for peaceful purposes. The 55,000 pages of secret information prove that Iran has engaged in a nuclear weapons program for over twenty years, despite its oft repeated denials.

Netanyahu’s argument was simple. Iran never had any intention of complying with the so-called “Iran Nuclear Deal” of 2015, and the mothballed archive proved the regime was ready to reactivate its nuclear weapons ambitions at the first opportunity.

It was a busy week for Netanyahu. On Sunday, a presumed Israeli airstrike bombed a complex near Hama, in Syria. The attack destroyed approximately 200 missiles and killed 16 people, at least 11 of them Iranians. Meanwhile, Israel’s Knesset voted on a bill to empower a reduced “security cabinet” to declare war if necessary, and, in “extreme circumstances,” on the orders of the prime minister and defense minister alone.

Even the New York Times, no fan of Netanyahu, grudgingly acknowledged the Israeli prime minister’s remarkable ability to take control of the agenda in the midst of rapidly changing circumstances.

What is even more extraordinary is that all this is happening while Israel is threatened by Syria and Lebanon in the north, and incursions at the Gaza border in the south, while Netanyahu and his wife are simultaneously being investigated for corruption in at least four separate investigations, all of which involve exhaustive police interviews and relentless coverage by Israel’s vigorous media.

Netanyahu’s upbeat demeanor and can-do attitude in the midst of all this is an inspiring model of leadership in the face of adversity.

Meanwhile, in Ramallah, at the same time as Netanyahu was dazzling the world with his multimedia presentation, Palestinian Authority president Mahmoud Abbas addressed the 23rd session of the Palestinian National Council, in a speech that left his supporters in the west shocked and dismayed. The speech, which was an opportunity for Abbas to reenergize his leadership, turned into a three-hour long rambling farce that would have been pathetic and pitiful had it not been so vile.

This was the first PNC meeting for 22 years. The last meeting, in 1996, took place during the heady post-Oslo period that many believed would result in a Palestinian state alongside Israel before the millennium. The situation in 2018 is notably different. Gaza is controlled by Hamas, and despite feverish efforts to effect a reconciliation between Hamas and Abbas before this week’s meeting, Hamas was notably absent, and Gaza remains out of bounds for the Palestinian Authority.

International support for Abbas and the Palestinians has waned considerably, most conspicuously in the Arab world.

At a meeting with Jewish leaders in New York last month, Saudi Arabia’s powerhouse Crown Prince Mohamed bin Salman openly criticized Abbas for having consistently rejected opportunities for peace with Israel. According to unnamed sources who attended the meeting, the Crown Prince said it was “time the Palestinians accept [peace] offers and agree to come to the negotiating table — or they should shut up and stop complaining.”

In the same week, the Crown Prince told Atlantic he believed both “the Palestinians and the Israelis have the right to have their own land,” the first time a Saudi leader has publicly acknowledged Israel’s right to exist.

But instead of creating optimism for the Palestinian cause, Abbas launched into a tirade against Jews and Israel that included anti-Semitic tropes long discarded to the margins of political discourse: the Jews brought the Holocaust upon themselves because they were usurers; there is no such thing as a “Jewish people”; there is no connection between Jews and the land of Israel; Israel was established as “a colonial project” to protect European interests in the Middle East, and so on.

We’ve heard it all before, but this time it reflected the ineffectiveness of the Abbas leadership like it never has before. Suddenly, the king had no clothes.

The same New York Times that openly despises Netanyahu issued an editorial under the heading “Let Abbas’s Vile Words Be His Last as Palestinian Leader.” The editorial admitted that Abbas had lost “all credibility,” and it was time for the Palestinians to find “a leader with energy, integrity and vision.” Around the world, friends and critics concurred – this was the end of the road for Abbas.

What a contrast. Two leaders under pressure – one projects hope and optimism, the other spouts bile and projects doom.

The Torah portion of Emor opens with a verse instructing Moses to speak to the priests about their mourning practices (Lev. 21:1): אֱמֹר אֶל הַכֹּהֲנִים בְּנֵי אַהֲרֹן וְאָמַרְתָּ אֲלֵהֶם – “speak to the priests, the sons of Aaron, and say to them.”

Rashi picks up on the repetition of the Hebrew word “amar” and explains it to mean that adults had to take responsibility for their children, in Hebrew: “l’hazhir gedolim al ha’ketanim” – “to caution adults with regard to the children.”

In other words, adults have a responsibility to ensure that their children comply with the Torah’s requirements, and not just worry about themselves. The reason this concept crops up here is because priests serve a double function, as parents to their children, and as leaders of the nation. How they behave, particularly in times of stress such as when they are in mourning, would impact on how the entire nation behaved.

The Holocaust martyr Rabbi Aryeh Zvi Frumer (1884-1943) takes this concept even further. The word “l’hazhir” is the verb form of the word “zohar,” which means shining.

In order to be a good leader, one must inspire by being a shining example of positivity and optimism. Particularly in times of adversity, this is the mark of true leadership.