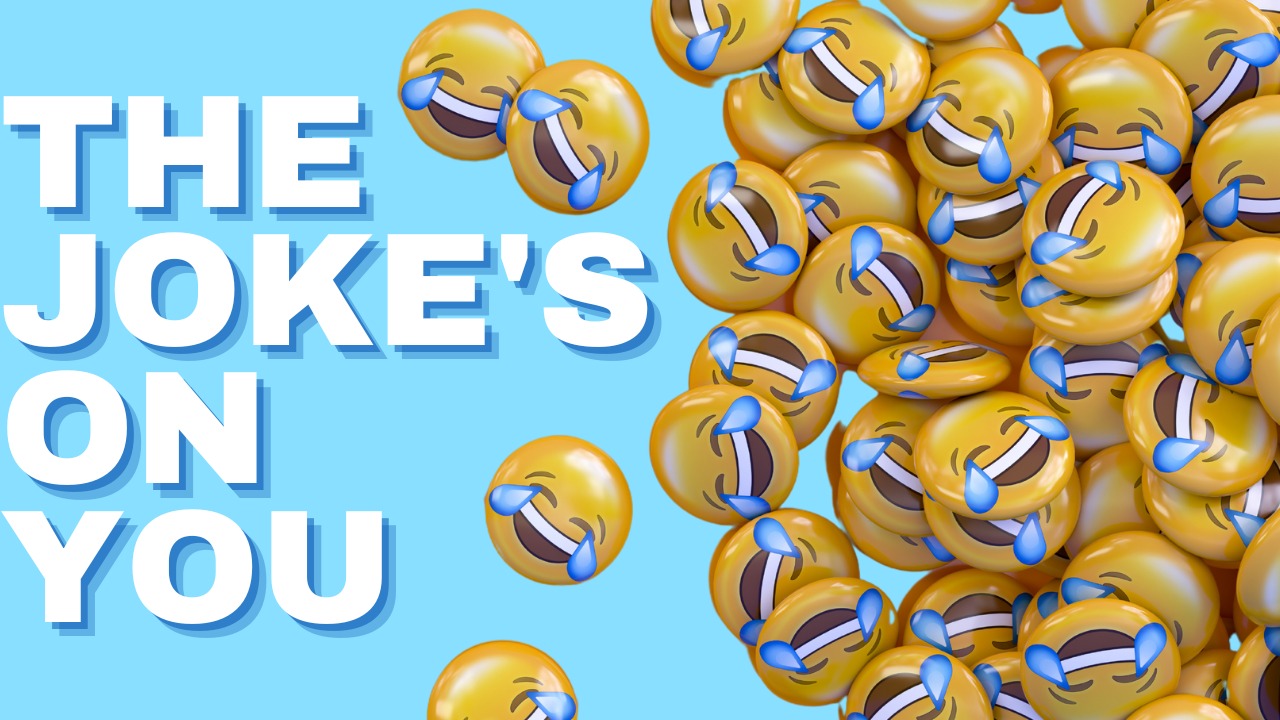 “Sarcasm is the lowest form of wit,” said Oscar Wilde, “but it is the highest form of intelligence.”

Truthfully, categorizing sarcasm as the lowest form of wit is a dubious proposition – after all, surely “dad jokes” are a more suitable candidate for that particular definition. And it is certainly a fact that dad jokes could never be mistaken as the highest form of intelligence!

Although, the groan-punctuated laughs that dad jokes always seem to elicit can be a positive, even bonding, experience – and are certainly far more satisfying than the sneer generated by scathing sarcasm.

Readers Digest recently published a collection of the “100 funniest jokes from the last 100 years” – all of them drawn from the pages of their issues.

Here’s one from 1981: At a party, a young wife admonished her husband, “That’s the fourth time you’ve gone back for ice cream and cake – doesn’t it embarrass you?” “Why should it?” answered her spouse, “I keep telling them it’s for you.”

And just one more, this one an anecdote sent to Readers Digest by pastor Rev. Eric Davis in 1979: “While I was making farewell visits before moving to a new parish, an elderly member of the congregation paid me the compliment of suggesting that my successor would not be as good as I had been. “Nonsense,” I replied, flattered. “No, really,” she insisted. “I’ve lived here under five different ministers, and each new one has been worse than the last.”

While the obvious purpose of jokes is to put us in good spirits, jokes can also be used as a weapon – as they frequently are, with the target suffering distress as the butt of someone else’s humor.

“Oh, but I was only kidding!” is the standard defense. But it’s a defense that doesn’t really hold water. As author Eileen Cook put it, in her 2017 novel, The Hanging Girl: “Ah, the joking defense. The tried-and-true excuse for bullies everywhere.”

In 2017, 12-year-old Mallory Grossman of New Jersey committed suicide after being relentlessly cyberbullied by her school peers. Immediately after the tragedy, her mother, Dianne, told NBC News that she had spoken to one of the other school parents the night before Mallory committed suicide, “and I can tell you that the mother dismissed [the cyberbullying and] said it was just a big joke, and that I really shouldn’t worry about it.”

A 2020 study published by the University of Nottingham in the U.K. titled “Adolescents’ perceptions and awareness of the association between humour, banter, and cyberbullying,” discovered that “misinterpreting online banter can be a common experience for young people,” often leading to lines being crossed by those posting “banter” online, and those at the receiving end of the online “banter” feeling humiliated and bullied.

Humor used as a weapon can be very effective and even dangerous, and it has been used throughout history as a revolutionary tool, psychologically reducing an admired and venerated leader to an object of ridicule and undermining their leadership legitimacy – which explains why the Nazi regime banned the publication of anti-Nazi jokes in Germany within a year of coming into power.

In 2008, sociologist Majken Jul Sorenson published an academic article titled “Humor as a Serious Strategy of Nonviolent Resistance to Oppression.” The article explores how humor can be used as a strategy of nonviolent resistance to oppression and dictatorship, and it focuses in particular on the Serbian Otpor movement, which successfully used a countrywide satirical campaign to topple Slobodan Milošević from power.

The Midrash reveals that Korach used exactly this strategy in his attempt to unseat Moses from the leadership of the Jewish people, and Aaron from his position as high priest. The Midrash implies that it was Korach’s jokes at Moses’ expense which enabled him to gain the support of 250 senior leaders, by turning Moses into an object of fun.

“If a mezuzah, which is a tiny scroll with just two Torah paragraphs, is enough to put on the door of a house – what if the house is full of Torah scrolls, does it still need a mezuzah?” Korach asked, no doubt in an exaggerated mocking tone. Moses replied that the house would need a Mezuzah on the doorpost, notwithstanding all the Torah scrolls inside – and the gathered crowd immediately burst into fits of laughter.

“How about this one,” continued Korach, nodding at the crowd with a raised eyebrow and a wink – “If one blue string on tzitzit fringes is sufficient to make the 4-cornered tzitzit garment kosher to wear, what if the whole garment is fabricated out of blue cloth, does it still need tzitzit?” Once again Moses nodded – “yes, it most certainly does,” he replied. And once again the crowd laughed at the incongruity of having to affix blue tzitzit threads onto the corner of a fully blue garment.

Clearly, Korach’s facetious banter was not just aimed at unseating Moses and Aaron, it was also calibrated to undermine the very fundamental core of Judaism – our faith in the halakhic system, and in those who preside over it.

“Before beginning to teach his students,” the Talmud tells us, “Rabbah would say a little joke, and the students were amused. After that, he became serious – and then he would begin the lesson.” (Shabbat 30b)

Humor and laughter have their place. They create bonds between people and can charge batteries that have been deadened by humdrum day-to-day life. But when humor crosses the line into the merciless lampooning of everything we hold to be important and sacred – with the deliberate intent of tearing our foundations apart – that’s not funny, instead it is a road to oblivion.

And even though, in the heat of the moment, a destructive joke can be hilarious, momentary joy should never be mistaken for long-term happiness.