THE GREATNESS OF MENACHEM BEGIN 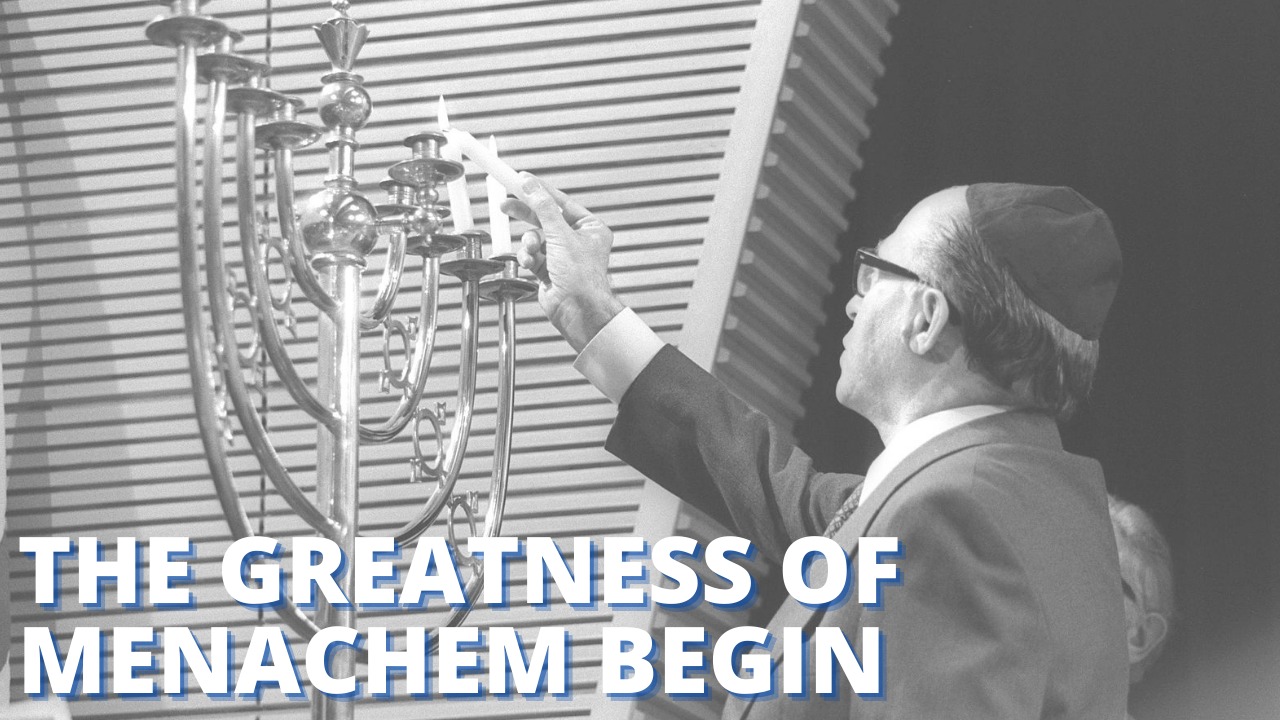 One of my most prominent early childhood memories involves the late Prime Minister of Israel, Menachem Begin. It was the late afternoon of December 1st, 1977, and my parents suddenly appeared to pick me up from school, along with my brother Zev.

“We’re going to see someone very special,” they told us.

“The Prime Minister of Israel—he’s here in London, and we are going to watch him light the Chanukah candles.”

The event was utterly overwhelming. Thousands of people crowded into St. John’s Wood Synagogue to catch a glimpse of Begin, who only a few months earlier had swept into electoral victory after 29 years as the leader of Israel’s parliamentary opposition, and who had just two weeks earlier hosted Egypt’s President Anwar el-Sadat for his historic 2-day visit to Jerusalem.

London’s Jewish Chronicle breathlessly described the scene in an article published later that week: “Mr. Menachem Begin’s entry into the St. John’s Wood Synagogue this week to light the second Chanucah candle was described by an onlooker as ‘a royal progress.’ His slow walk down the centre aisle was accompanied by loud applause and cheers from over 2,000 congregants watching him kindle the light.”

Although I don’t remember anything Begin said that night, I still recall the hushed silence that gripped the audience as soon as he began his address, and how they all hung on his every word. Begin’s face was beaming, and the love for him was palpable. At just 7-years old, I knew I was in the presence of greatness – long before the never-ending standing ovation erupted when he concluded his remarks.

The memory of that winter night in London so many years ago is still very fresh in my mind, but it was even more so earlier this week, when our community hosted the Los Angeles premiere of Upheaval: The Journey of Menachem Begin at the Harmony Gold Theater in Hollywood.

This kaleidoscopic documentary reveals aspects of Begin’s life that are not only surprising, but also brilliantly researched. No aspect of Begin’s long public career is omitted, and what we discover is a man who was supremely confident in his Jewish identity, and in his conviction that the future safety of the Jewish people is intimately bound up with an unapologetic Jewish identity uncontaminated by low self-esteem.

But truthfully, there was one aspect of Begin’s incredible life that I felt was absent from the film, no doubt because of the limitations of a 90-minute movie – but perhaps because the director didn’t quite get the importance of this facet in terms of who Begin was, not just as a person, but as a Jewish leader.

Because for Menachem Begin, Jewish traditions and observing ritual mitzvot were not just window dressing, nor were they merely a Zionist punchline, but rather they were a crucial component of who Jews are, and who they should be. Unlike the founding fathers of the state, Begin recognized that without the fabric of Jewish faith practices, Jewish identity was hollow, and ultimately unsustainable.

On one famous occasion Begin spoke passionately about the Shabbat-observant Jews of his youth, in his place of birth, Brest-Litovsk, the small Belarusian town better known in the Jewish world by its Yiddish name: Brisk.

“There has never been a nation like this in the world,” he began, his eyes gleaming, “tradesmen, cobblers, tailors, waggoneers. [And yet on] Shabbat, each man became a king – a king! Children sitting around the table, the royal sabbath… while in town: no movement, no motion, no wagons, just total silence – even the gentiles respect the sabbath!”

This rousing speech was part of Begin’s 1981 pitch to suspend El Al flights on Shabbat. How was it possible, he argued, for the Jewish state’s national airline to fly on Shabbat, if in Brisk the gentiles respected Shabbat, and in Salonika, Greece, the bustling port had historically closed on Friday afternoon and only reopened on Sunday, in consideration for the majority of its workers, who were Jewish?

Begin’s bid to change the El Al flight schedules was successful, and ever since, for over 40 years, no El Al plane has taken off or landed on Shabbat, and so it will remain in perpetuity. And while this may not have been a political achievement at the level of Begin’s Nobel Prize-winning role in the Camp David Peace Accords signed with Egypt in 1979, it nonetheless shines a light onto Menachem Begin the Jew, as opposed to Menachem Begin the politician, or Menachem Begin the prime minister.

At the beginning of Parshat Kedoshim, the Jewish people are instructed to “be holy!” and then, in the next sentence, they are told to revere their parents and to observe the Shabbat. Most of the commentaries are confounded by the correlation of these two seemingly unconnected directives – one regarding an essential component of civilized society, the other a ritual law that relates to commemorating the creation narrative.

Most famously, Rashi quotes a passage in the Talmud (Bava Metzia 32a) which suggests that the association is deliberate and that the context is legal: if a father or mother tell their child to desecrate the Shabbat, the laws of Shabbat override one’s filial obligations.

But I would like to offer another explanation, inspired by the profound words of Menachem Begin regarding Shabbat. No human being can deny the importance of respecting one’s parents. Since the dawn of history, in every society and culture, honoring one’s parents into old age is of paramount importance, recognized as a mark of human civilization.

Our father and mother are not just some random man or woman – they are very special, and they must be treated as such. And perhaps this is what the verse wants to highlight regarding Shabbat. In Jewish tradition, Shabbat is no less important than this most basic aspect of broader human culture.

For a Jew, treating the Shabbat with reverence and respect, and not just like any other day of the week, is at the center of who we are – indeed, it is the very essence of Jewish identity.