THE DANGER OF PEOPLE POWER 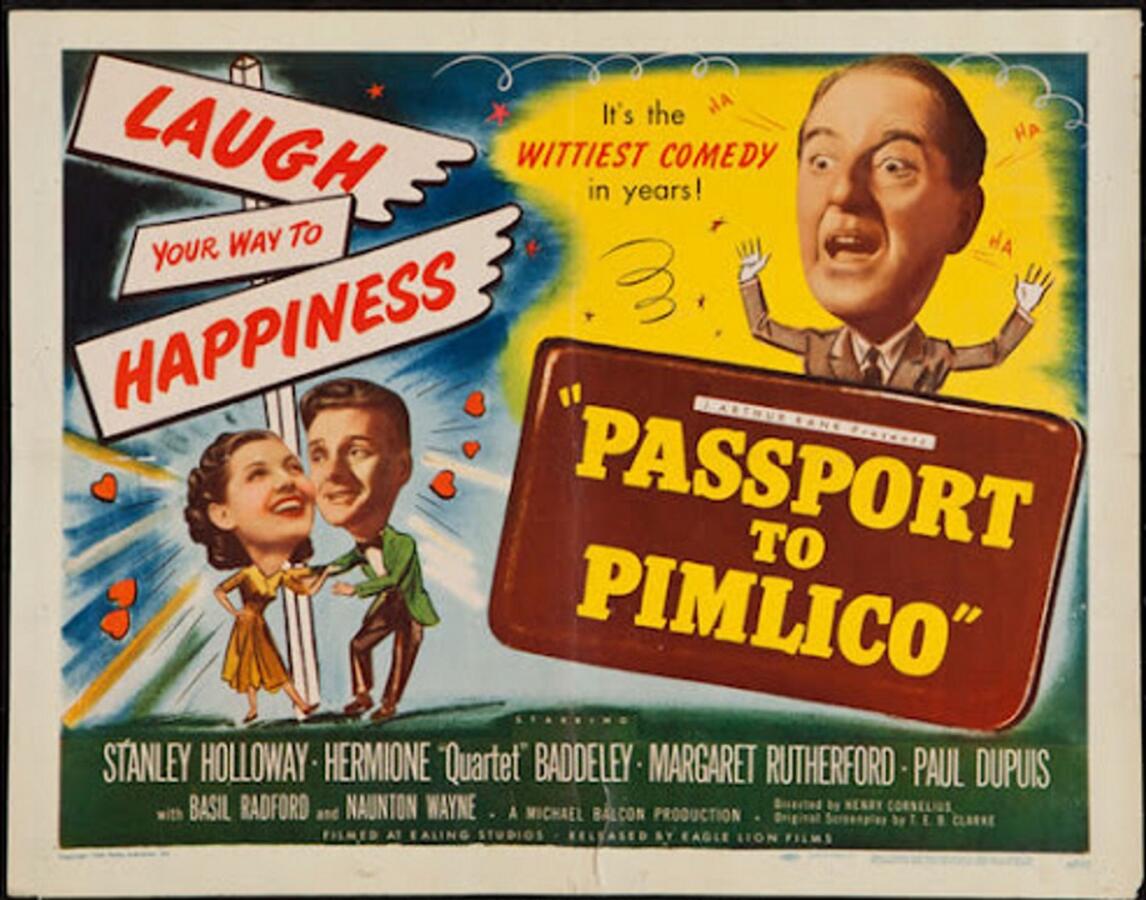 Those familiar with the history of British cinema will certainly have heard of a genre of films known as the Ealing Comedies, a series of comedy films produced by Ealing Studios in London between 1947 and 1957.

Among the light-touch dry comedic Ealing masterpieces were movies such as Kind Hearts and Coronets (1949), The Lavender Hill Mob (1951), and The Ladykillers (1955), starring, among others, Sir Alec Guinness, Alastair Sim, Margaret Rutherford and Stanley Holloway.

But although all of these movies were groundbreaking, as well as hugely entertaining, there is one that sticks out in particular in terms of its originality – and its prescience. That movie is Passport to Pimlico (1949).

Pimlico is an upscale residential neighborhood in central London, just south of Belgravia, best known for its imposing Regency townhouses and famous residents, which in the past have included Sir Winston Churchill and Sir Laurence Olivier.

The rather far-fetched premise of Passport to Pimlico hinges on the discovery of a buried treasure in Pimlico after an unexploded wartime bomb is triggered by accident. Alongside the treasure is an ancient document which reveals that the area now known as Pimlico was originally gifted to the Duke of Burgundy in 1477, and is in fact its own legal entity, and crucially, it is not governed by British law.

Overwhelmed by the opportunity this presents in the rather grim postwar climate, Pimlico residents decide to declare their independence from the United Kingdom. But although this leads to a short-term economic boom, very soon the area descends into complete chaos.

With its tongue firmly in its cheek, the movie explores the tension between the human desire to be free of any external control versus the benefits and safety that such control brings to society.

Although Passport to Pimlico principally reflects the irrepressible spirit of Londoners in the wake of the devastating war years and the difficult period of postwar austerity, in an uncanny way the film foreshadows many aspects of the political climate of today, with ordinary people banding together and resisting the ruling classes who they see as oppressive and retrograde.

But be that as it may, I never imagined in my wildest dreams that the movie’s central premise would one day become a reality. How wrong I was.

On June 9, the activists behind CHAZ listed thirty of their demands online, which, among other things, included the abolition of SPD and the Seattle court system; defunding SPD and reallocating those funds to health costs; banning police use of firearms, batons, riot shields, and chemical agents; the release of prisoners serving time for marijuana-related offenses or resisting arrest; mandatory retrials for people of color who are serving sentences for violent crimes; and prison abolition.

I have puzzled over why this group of urban anarchists think the US authorities should take any notice of the demands of self-declared foreign nationals, but I am guessing the irony of that particular observation would be lost on them.

It is also unclear to me what exactly the United States would get in return for agreeing to the demands, and it’s not as if CHAZ has either military or diplomatic leverage.

But most intriguing of all – I am really struggling to work out on what basis a bunch of street activists can decide to seize sovereign territory. At least the silver-screen Pimlico group had an ancient manuscript to underscore their claim. These guys have nothing.

John Lennon, a great songwriter who was simultaneously an insidious nihilist, released a song in 1971 titled Power to the People. The song utilized a slogan that had gained traction through the 1960s among antiwar protestors and radical elements of the civil rights movement whose aim was to foment rebellion against the establishment.

But like so many other slogans concocted and popularized by champagne revolutionaries, the reality of ‘people power’ has always proven to be more suffering, not less. Abuses of power are the tragic consequence of power, and every system needs checks and balances to mitigate and reduce the ill effects of corruption.

But to abandon the system altogether and put the lives of ordinary citizens in the hands of people driven by slogans is unquestionably a far greater threat than anything a faulty system is guilty of.

The Book of Bamidbar contains a number of narratives featuring ‘people power’ as their central theme. The most prominent of these narratives are the story of the spies in Shelach, and the story of Korach’s rebellion in Korach. In both of them the driving force was ostensibly a popular revolt against top-down authority, but that was not the case at all. In reality sinister forces were at work, manipulating the masses into believing they would be better off, when actually it was not true, and nor was this the aim of those behind the insurgency.

The spies were all princes of their tribes, and their motivation was a desire to retain power over the people, who they feared would depose them if they moved into the Land of Israel. Meanwhile, Korach presented his revolt as a ‘people power’ revolution, but he was really just a power-hungry plutocrat using popular discontent to propel him into a leadership position.

There is something strangely alluring about ‘people power’, a kind of idealism that seizes and dazzles us. Somehow we think, not unreasonably, that those in authority could be doing a better job, and that if we clipped their wings and devolved power to the people, the world would be a better place.

But history has proven time and time again that the very opposite is true. Most ‘people power’ revolutions have resulted in nothing but suffering and misery, even as a handful of devious insurrectionists have taken advantage of our idealistic naiveté and seized control in the power vacuum the revolution has created.

In Passport to Pimlico, Pimlico ultimately returns to the fold, abandoning its independence aspirations and reuniting with Britain while life returns to ‘normal’.

The message seems to be that despite all the sacrifices and enthusiastic optimism, when push comes to shove, anarchy serves nothing but itself, and all efforts to completely rewrite the human rulebook are doomed to failure.

Before it is too late, we need to realize that those behind CHAZ are not just a bunch of cheeky chaps thumbing their nose at the system; rather they represent a real threat to our hard-earned democracy and freedoms, and the sooner they are shut down for good, the better.