THE CHOSENNESS OF THE CHOSEN PEOPLE 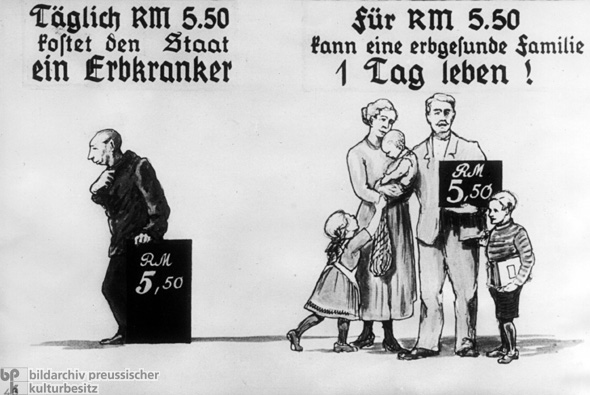 Exactly 80 years ago this week, Nazi Germany took a critical step in its collective journey towards the eventual genocide of 6 million Jews.

On January 1, 1934, a new law took effect that required doctors to register every case of hereditary illness they came across while treating their patients. The ‘Law for the Prevention of Hereditarily Diseased Offspring’ was the initial step taken by Hitler to ensure a racially pure, and genetically pure super-race of Aryans.

It was a step that ultimately wound its way towards the ‘Final Solution’, and towards rationalizing wholesale murder and genocide.

Even in that first year of the law’s operation 3,559 people were sterilized – such was Nazi Germany’s determination to prevent ‘undesirables’ from being a part of their envisioned ‘super-race’.

We, as Jews, are so overwhelmed by the devastation of the Holocaust for our own people, that we are understandably uninformed about the effects of this evil law, which saw more than 400,000 people sterilized against their will by the end of the war.

This horrifying fact resonated with me as I studied the  Torah portion of Bo, which describes our miraculous evolution from a slave minority to the chosen nation of Israel.

How was our national identity defined? What made us chosen? What stands out, particularly because ancient Egyptian culture placed so much emphasis on the physical human being, not only in life but in death, with post-mortem mummification and the worship of the human form, is the contrast between the culture of Egypt and the genesis of the nation of Israel.

Time after time Moses explained to Pharaoh how his people needed to gather together to pay tribute to a God without a form, a deity without a physical presence.

Moreover, appearance and physical strength played no role in the significance of each individual – even the downtrodden Hebrews, who were a group of lowly slaves, nothing more than a tired collection of despised foreigners, could be the chosen nation of God.

Remarkably, the very survival of the Jewish nation over our 3,300-year journey has been a result of this powerful message. ‘Super-races’ come and go. That is because if you define yourself through ephemeral power and perceived superiority, the decay has set in long before you’ve peaked, and your demise is guaranteed.

If, however, you define yourself by a commitment to good deeds and spiritual growth, by a devotion to an existence that transcends the physical and the mundane, one is setting the foundations for life after ones own lifetime, and for purpose that will seem purposeful to generation after generation.

One can only imagine the euphoria of the Jewish people as they emerged from Egypt, and one can superficially compare it to the euphoria of the German nation in the period after they had finally thrown off the shackles of reparations and humiliation that had come in the wake of the First World War.

The difference is that while the Jewish nation launched their peoplehood by making a commitment at Mount Sinai to morality and seeking the Divine, the Germans chose a different and ultimately self-destructive path.

The message to be gleaned from this, and from the genesis and endurance of the Jewish people, is that our continued devotion to these sacred ideals is all that really matters. Indeed, it is all God wants from us.

That is what is meant by the ‘Chosen People’. It does not imply that we are better. On the contrary — it means duty and commitment, and an understanding that to be chosen is a responsibility, not an entitlement.

Photo: Nazi poster sowing the comparison of daily living costs for an individual with a hereditary disease versus a healthy family. Copyright: Bildarchiv Preußischer Kulturbesitz