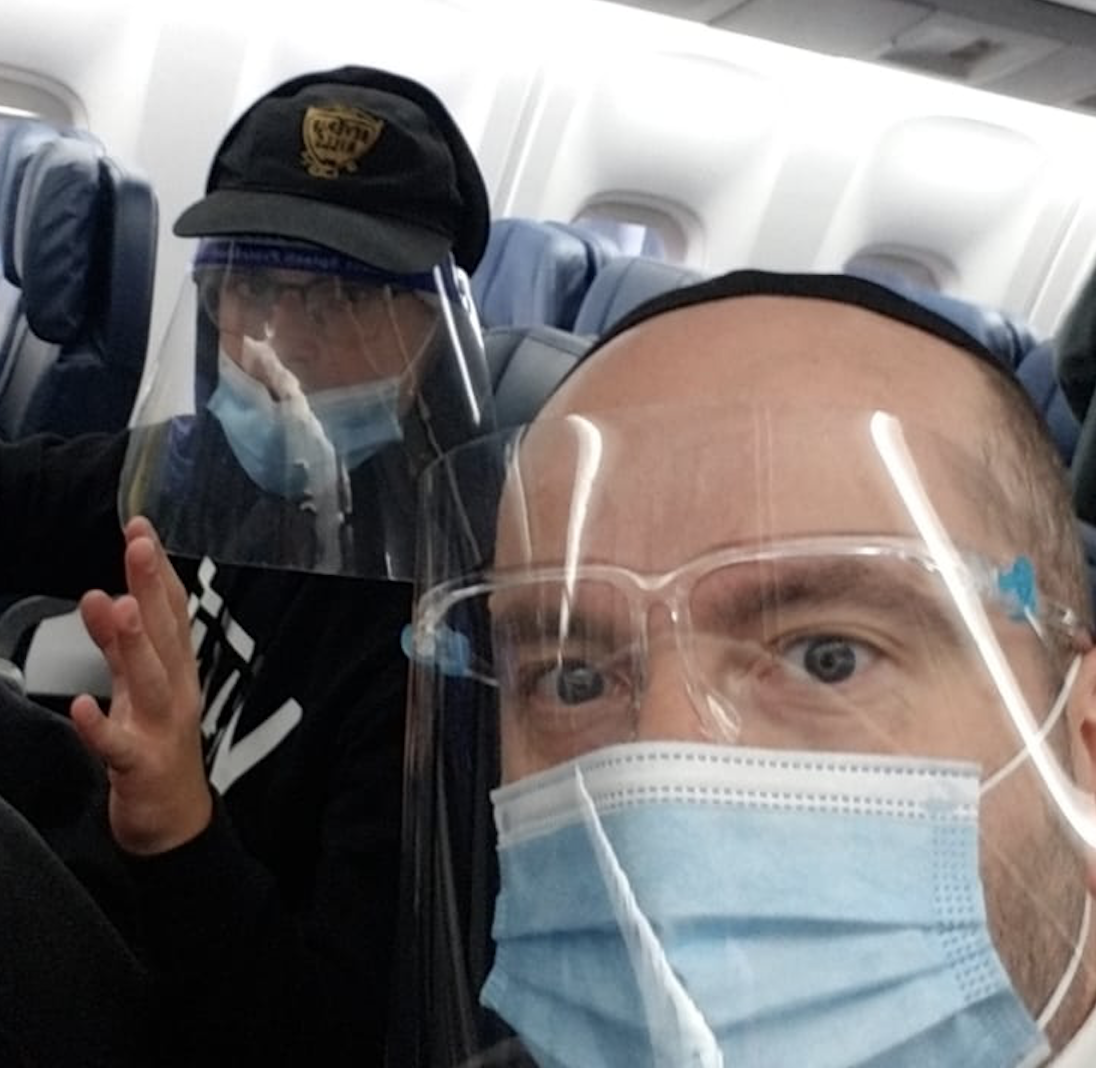 Earlier this week, after months of self-imposed quarantine and rigidly adhered-to social distancing, I abandoned caution and flew with my son Meir to Israel, so that he can realize his dream of joining the IDF as a Lone Soldier.

As soon as we arrived in Israel, we went into two weeks of legally required quarantine. And as a result of our total isolation I have had a lot of time to reflect, and, with your permission, I would like to share some of my reflections with you.

Firstly, as someone who travels frequently by air, it is clear from our trip that air travel as we know it has changed completely, perhaps forever. We traveled through three airports – LAX, JFK, and Ben Gurion – and every one of these normally bustling airports was utterly empty and lifeless.

Shops and cafes were closed, and the few straggling travelers who were in these airports wondered aimlessly around, doing everything they could to avoid each other while trying to make sense of the overwhelming tranquility – not a word one would ordinarily associate with an airport.

Everyone on the flights wore masks, and some of us also wore face shields. Seats were left deliberately empty by the airline so that people were not forced to come into close proximity, and the food and drinks service was limited. People were anxious, and the whole experience was clearly an ordeal for everyone involved.

Arriving in Israel as a non-Israeli meant that we had to go through various checkpoints. Both Meir and I had been granted an “ishur” – permission to travel to Israel – by the Israeli government; without it we would not have been allowed on the plane.

But even once we had arrived, we were closely questioned about our health status as well as our activities over the past several weeks. Truthfully, it was all a little chaotic; clearly this process continues to be a learning curve for border personnel. Pointedly, there was an air of desperation and uncertainty about it all.

And this comes against the backdrop of a world falling apart at the seams. In the United States, reckless anarchy has reared its ugly head, as thousands of protestors openly flout social distancing rules and tear down monuments, while ordinary citizens cower in their homes hoping against hope that life will somehow get back to normal without affecting them too badly.

The short-lived ‘autonomous zone’ experiment in Seattle ended earlier this week, in the wake of countless lawless acts, two of which resulted in homicides. But notwithstanding the intervention by city authorities, a scary precedent has been set, and it has become all too clear that democratic lawful protests are being replaced by deliberately encouraged chaos and disorder, all in the name of so-called freedom and progress.

And this all happened in the same week as ‘Day of Rage’ demonstrations erupted across the US against Israel. One of the speakers, in Brooklyn – a district that is home to hundreds of thousands of Jews – yelled her message for the whole world to hear: “We don’t just want to go back to our homes in Gaza and the West Bank. We want all of it…we don’t want your two states.” Chants at the protests included the openly genocidal “from the river to the sea” along with “intifada, intifada.”

In California, demonstrators positioned themselves outside Nancy Pelosi’s residence in San Francisco and demanded that she publicly oppose Israel’s plans to apply sovereignty to certain areas in Judea and Samaria.

Nowhere in the world seems safe right now. In Hong Kong, China has just imposed ‘national security’ measures that allows them to arrest anyone caught demonstrating against the local government, and to deport them to China so that they can incarcerate them indefinitely.

Some years ago I was offered the position to be senior rabbi of Ohel Leah congregation in Hong Kong, essentially the leading rabbinic position in this former British colony. At the time we decided not to take up the position, but in our wildest dreams we never imagined that one day this bastion of western civilization and capitalism in the Far East would become a tinpot dictatorship danger zone for ordinary westerners. The thought that Europeans and Americans living in Hong Kong are right now desperately looking to leave and find livelihoods elsewhere is frankly unthinkable – but it’s happening.

Someone from my community this week informed me that they have entered into negotiations to buy an apartment in Israel. With all that is going on in the United States, they have decided it makes most sense for them to go ahead and commit to a place in Israel. Frankly, I couldn’t agree with them more. Although, we agreed that the current uncertainty extends to Israel as well. Nevertheless, if one is going to make a firm commitment, it is best to go for something  in Israel, however uncertain that may be, as at least this is an open demonstration of our Jewish identity, rather than opting for some vacuous uncertainty that is merely an act of window-dressing, projecting values that are fashionably humanistic, but do not reflect the essence of thousands of years of Jewish history.

I had a flash of inspiration earlier today with regard to the concept of Chukkat, the Torah portion that records the mitzva of Parah Adumah – a Red Cow whose sacrificial ashes purifies those who have become ritually contaminated via contact with a human corpse.

The Red Cow mitzva is considered the paradigm of incomprehensible ritual, particularly because those engaged in purifying the contaminated themselves become contaminated by doing what needs to be done to effect the purification.

The Midrash tells us that a gentile agitator once challenged the great Talmudic sage, R. Yohanan ben Zakkai: the rites you perform in connection with the Red Heifer have the whiff of witchcraft, he said. You bring a heifer, burn it, grind it and take its ashes. Then you sprinkle two or three drops on the person who has been contaminated by a corpse and tell him he is clean.

R. Yohanan b. Zakkai asked the man: have you ever been possessed by a demon? He answered: no. Well, have you ever seen a man possessed by a demon? He answered: Yes. And what do you do for him? We bring herbs and smoke them beneath him, and then throw water on him and the demon is exorcised. Said R. Yohanan b. Zakkai: let your ears hear what your mouth has spoken. The spirit of defilement is the same as your demon. We sprinkle the waters of purification onto it and it is exorcised.

After the gentile left, R. Yohanan’s disciples remonstrated with him: you may have put that guy off with a rhetorical rebuff, but what answer will you give us? To which he replied, the dead neither defiles nor does the water purify, but God has said: it is a statute I have laid down, a decree that I have decreed, and you are not authorized to violate my decree.

Essentially, this entire idea is presented to us by the commentaries as a window into the Jewish theological requirement to embrace the irrational. None of it makes any sense, but that’s exactly the point – even those things we think we understand are really incomprehensible at a deeper level, and our rational embrace of them is simply a comfort blanket that makes it easier for us to live with.

But today I thought to myself: what if it has nothing whatsoever to do with rational considerations? What if the idea God wants to convey to us is that there is no such thing as certainty, and that the only certainty we have is faith in Him?

We plan our lives, and make predictions about how our lives will unfold, and within certain foreseeable variables we know what to expect. And then something like COVID-19 appears out of the blue, and then some random event like the death of George Floyd occurs, and suddenly everything we thought we knew goes awry.

Our economic future is uncertain; our democratic certainties are upended; our safety and civil protections are thrown into disarray; and even our children’s graduations and our vacation plans are no longer what we thought they would be. Everything we thought was certain is no longer certain at all. The only certainty is uncertainty.

Perhaps that is the message of Chukkat. Don’t imagine you know or can be certain about anything. The most profound connection we can have with God will never be based on anything predictable; on the contrary, we will only ever come close to God if we recognize the ultimate truth – that anything we have is a random benefit that has no rhyme or reason, and that we must be thankful every minute of every day for everything we have, and we must pray that we continue to benefit from it in a very choppy, volatile world.