STORM IN A TEACUP 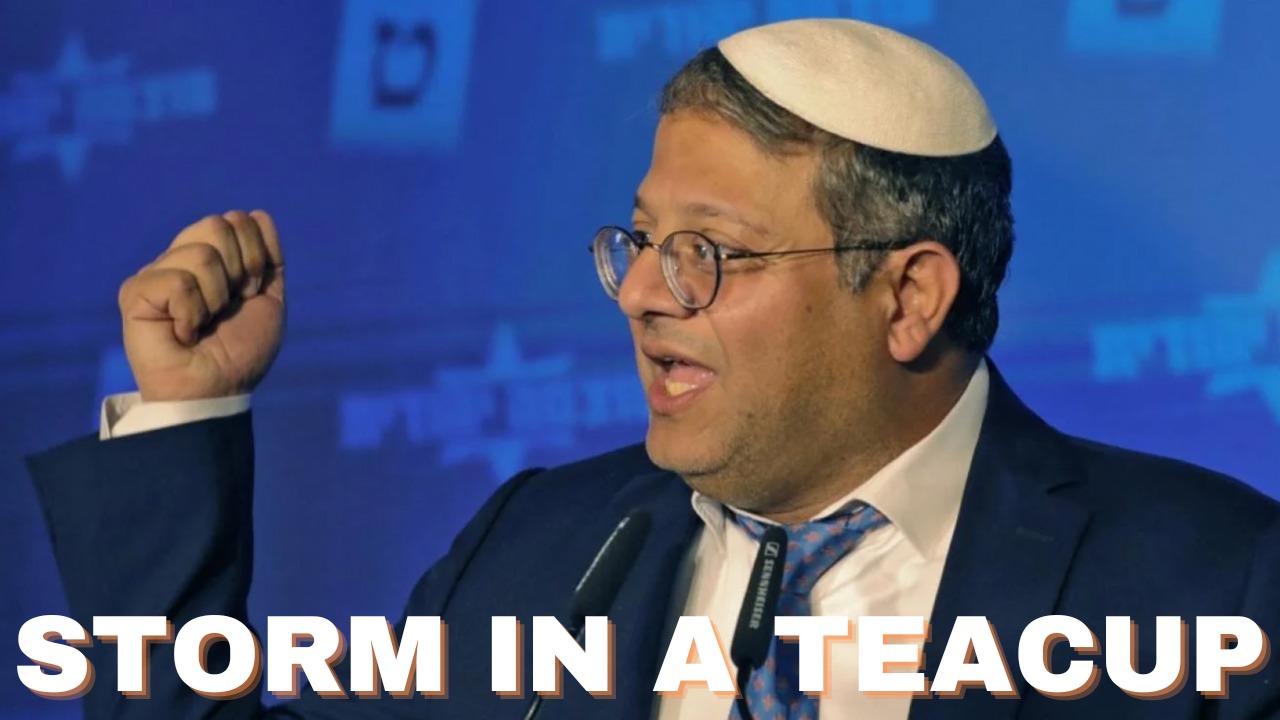 The conversation about Israel in the Jewish community around the world has turned decidedly negative. With the election of the “most right-wing government in Israeli history,” and with the appointment as national security minister of Itamar Ben-Gvir – dubbed by the Jewish media as “an acolyte of Meir Kahane” who leads a “Jewish supremacist party”, left-leaning non-Israeli Jews are apoplectic, while even those in the center are decidedly anxious.

Alan Dershowitz, whose bestselling book The Case for Israel has become a standard text for pro-Israel activists, joined the chorus of voices critical of Ben-Gvir and his political ally Betzalel Smotrich, suggesting that what they had demanded and proposed in order to be included in the coalition was “making it much harder to defend Israel.”

Rabbi Rick Jacobs, president of the Union of Reform Judaism, went much further, telling Ynet that “appointing Itamar Ben-Gvir as public security minister is like appointing David Duke, head of the KKK, to be attorney general.”

The angst is overwhelming. Jonathan Freedland, an urbane, left-of-center British newspaper columnist and pundit not known for his alarmist views, has written an op-ed offering advice to those in the UK Jewish community concerned with the rise of Ben-Gvir, so that “the darkness this man threatens will not go unanswered.” The article opens with a startling admission: “The conversation at every Jewish table I have sat around this last month has eventually come down to one topic… and can be reduced to a single name: Itamar Ben-Gvir.”

So there you have it. Case closed. Itamar Ben-Gvir is the Jewish world’s ultimate bogeyman, with no audible dissenting voice arguing to the contrary. It would appear that accepted wisdom has determined the verdict on Ben-Gvir, and – depending on where you are on the political map – either his elevation to government minister is the final nail in the coffin of mainstream Jewish diaspora support for Israel, or, at best, Jewish support for Israel in the diaspora will limp along through clenched teeth until the day, hopefully soon, when the Israeli electorate will come to its senses and rid the country of this troublesome miscreant.

Well, without wanting to be a party pooper, I, for one, am far more sanguine. Let me tell you why. Firstly, for those – like me – who utterly reject the concept of Israel as a colonial entity which imposes its self-serving will on hapless indigenous Arabs, the idea that I might have a better idea of how Israel, the world’s only Jewish country, should run itself because I happen to be Jewish, and because I support the concept of a Jewish state, is totally preposterous.

Israel is entitled to present electoral choices to its voters – as it frequently has over the past few years – and then it is up to those voters to choose, via a majority, the people they trust to run their country. I don’t have a say, I don’t want a say, and the presumptuous arrogance of those who think that they know what is good for Israel better than Israeli voters, is the kind of condescending colonialist attitude that is so rightly deplored by the modern world.

And while you hold that thought, what I find particularly intriguing is that when the outgoing government chose in 2021 to include an Arab nationalist party that is root-and-branch opposed to Israel’s legitimacy to be part of the government coalition, there were no handwringing “conversations at every Jewish table” and angst-ridden op-eds about how Israel was doomed for all time. Which, of course, it wasn’t. Because everyone understood that Naftali Bennett and Yair Lapid’s government was a legitimate expression of Israeli democracy – as is the case with this new government, whatever its components may be.

And now let me turn to Itamar Ben-Gvir, the universally declared ogre of Israeli politics. What has he done to deserve his terrible reputation? Having read everything there is to read, I can summarize it as follows: it is his cited admiration for Meir Kahane, it is Baruch Goldstein’s photo in his living room (long removed), and it is his 2007 conviction for racism, for having displayed signs that read “Expel the Arab enemy” and “Arab MKs are a fifth column.”

But while this may be discomforting for western liberal sensibilities, in comparison to the backstories and activities of some of Israel’s rightwing icons, it all seems rather lame.

Menachem Begin led a “terrorist” organization, Irgun, that was responsible for, among other things, the bombing of the King David Hotel in 1946 that led to the deaths of 91 people. Yitzchak Shamir was a member of Lehi, an Irgun splinter group. He was responsible for the 1944 assassination of Lord Moyne, the British Minister for Middle East Affairs who Zionist revisionists believed was opposed to the creation of Israel. And both Begin and Shamir went on to become prime ministers of Israel and seasoned statesmen. Once they were involved in politics and had the responsibility of political leadership, their sharper edges were abandoned, and pragmatism prevailed.

On that note, I’d now like to up the ante. Unlike the countless defeatist pundits who have unequivocally declared Israel to be on an inexorable trajectory towards disaster, all without actually speaking to the person at whose door they lay blame for this pessimistic outlook, I reached out to Itamar Ben-Gvir to ask him what message he had for diaspora Jews concerned for the future of Israel with him playing a pivotal role.

Ben-Gvir is bemused by the furor his political elevation has had on Jews living outside Israel. “We Jews all have a common enemy,” he told me, “and that enemy is Jihad – people who want to turn the whole world into a retrograde caliphate and who think that non-Muslims have no right to be in Israel.”

But what about the Arabs in Israel, I asked him? He is set to be minister in charge of the police, which means he will be responsible for Arab well-being and security, not just for Jews. “I love our Jewish country, our Jewish land, but my job in the government will be, with God’s help, to take care of everyone in Israel, secular and religious, Jews and Arabs – so that all our children, and I mean Arab children as well as Jewish children – can walk safely on the street.” He sounded serious and sincere.

I told him that diaspora Jews are worried about what might happen now that he was part of the government. He expressed surprise. “Those who want to hurt us in Israel want to hurt you in the diaspora too,” he told me. “What starts in Israel continues and expands to harm Jews everywhere, and they also want to harm the whole world, God forbid, not just Jews. One can never give in to terrorism, and I will make sure that we stand firm in the face of terrorism. It is not about Arabs, but about terrorism. And I have made that very clear.”

I have come to the conclusion that rather than froth at the mouth about a worst-case scenario that hasn’t actually happened, how about we give Bibi Netanyahu and his new government the chance to govern? Rather than throw in the towel and give up on Israel, let’s give the country of Jewish destiny, the realization of a two-millennia dream, an opportunity to work itself out—to take care of itself as it knows best.

In Parshat Vayeishev, Joseph dreams that his brothers are harvesting sheaves of wheat. In retelling his dream, he informs his brothers (Gen. 37:7): וְהִנֵּה קָמָה אֲלֻמָּתִי וְגַם נִצָּבָה – “suddenly my sheaf stood up and remained upright.”

The Midrash connects the word “alumati” (my sheaf) with the Hebrew word “ilem,” which means someone who is mute—totally silent. According to the Midrash, Joseph was reminding his brothers that Rachel remained silent so as not to embarrass Leah when Jacob married Leah instead of her.

But while this is an interesting cross reference, how does Rachel’s silence connect to the story of Joseph and his brothers?

The message, I believe, is simple. The Midrash is making an astute observation about the value of silence when instinct compels you to voice an objection. Rachel was usurped by her sister and could justifiably have wrecked Leah’s wedding to Jacob. But she didn’t do that. She remained silent for her sister, because she loved her sister, and allowed fate to unfold – and in the end, it all turned out okay.

Joseph’s brothers feared his intention to eliminate them from the scene and to replace them as Jacob’s designated heir. Joseph wanted his brothers to know, via the loaded language used to describe his dream, that they were faced with the same choice Rachel had faced – the potential danger of their substitution in someone else’s favor. The test of their character was if they could remain silent and wait it out, rather than cause irreparable damage to the family.

As diaspora Jews, we are all faced with a choice. Either we can give voice to fears, founded or unfounded, regarding Itamar Ben-Gvir in particular, and Israel’s right-leaning government in general—potentially throwing Israel under the bus in the process. Or we can emulate Rachel, remaining silent in the face of perceived doom—perceived, because it might just be an almighty storm in a teacup.

I know which way I’m going on this; I encourage you to go that way too.