SEEING IS NOT BELIEVING 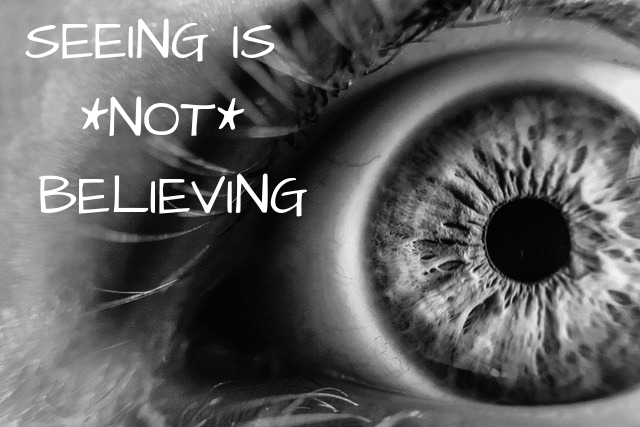 One of the primary sources of information at any trial is the testimony of witnesses who “were there”, who saw an event take place in front of them with their own eyes.

The legal term for this is “eyewitness testimony”, and, in particular, this kind of testimony is considered the most convincing form of evidence at a criminal trial, superseded only by a full perpetrator confession.

That dramatic moment during a trial, when a prosecutor asks the witness whether they can see the person who committed the crime in the courtroom, and the witness points to the defendant, is very often the moment that convinces the jury to find the defendant guilty.

The reason why eyewitness testimony is so convincing is that we all see ourselves as good witnesses, and place great trust in our own perception of what we see.

It may be a cliché, but we all instinctively suppose that “seeing is believing”, and that if someone sees something happening in front of them, what they say they saw must actually be what happened. It is as simple as that.

But is it really so simple? Eyewitness testimony is not as reliable as we might assume. In fact, it is notoriously unreliable.

Since the introduction of DNA evidence some thirty years ago, the identity of criminal perpetrators, as proved by forensic science, has often been at odds with the evidence presented by eyewitness testimony. Indeed, as a result of DNA testing, many previously convicted criminals – who more often than not were jailed as a direct result of eyewitness testimony – have been released.

According to the organization Innocence Project, “to date, 365 people in the United States have been exonerated by DNA testing, including 20 who served time on death row.” Of these, more than were convicted as a result of eyewitness misidentification and served an average of 14 years in prison before being exonerated.

The notion that a person’s memory is accurate, and that our memory records information like a video camera, is simply incorrect. Without delving into the psychology and neurology behind it, memory is entirely subjective, even when we believe we are entirely detached and objective. We are all biased to see and exaggerate some experiences, while we minimize or ignore others.

Jewish law factors this anomaly into the laws regarding evidence, and, for example, forbids witnesses testifying at the trial of a close relative, on the assumption that such testimony is bound to be tainted by bias.

The laws of those who can be witnesses at a trial are extremely restrictive, and the ability of Jewish courts to disqualify witnesses extremely . And while the Torah prescribes capital punishment for a whole range of iniquities, including murder, idol worship Sabbath-law desecration, in the death sentence was rarely carried out.

The Mishna in Makkot (1:10) records that a Jewish court which sentences a criminal to death once every seven or possibly seventy is considered a homicidal court. Most famously, the same Mishna records the statement of Rabbi Tarfon and Rabbi Akiva, two of the foremost Talmudic sages, who declared that were they of a Sanhedrin, “no person would ever be put to death.”

According to the this would be achieved by asking the kinds of questions to witnesses that would undermine the veracity of their testimony, easily done once one realizes the fallibility of eyewitness testimony.

The portion of Re’eh begins with the verse (Deut. 11:26): רְאֵה אָנֹכִי נֹתֵן לִפְנֵיכֶם הַיּוֹם בְּרָכָה וּקְלָלָה – “see, I give before you today a blessing and a curse.” Moses, launching into his most significant speech before his passing, and before the nation embarked on the expedition to take over Canaan, exhorted the Israelites to “see” the blessing and curse that was laid out before them.

All the commentaries take issue with the rather strange use of the word “see”. The context is wrong, as Moses was not showing them anything. Rather, Moses should have asked the nation to “listen” to the choices he was about to present, as he articulated them verbally.

Moses’ message was actually a subtle reminder regarding the fickle nature of sight. Two people can see exactly the same thing, but while one sees it as a blessing the other might see it as a curse.

For the Jewish nation entering the Promised Land, with all the challenges this dramatic change of circumstances posed, some might end up seeing the land of the covenant as a , even though with vision the reality was that it was a blessing.

Moses wanted to crystallize this consciousness and bring it to the forefront of the nation’s mind. Don’t ever forget, Moses was telling them, that eyewitness testimony is subjectively biased, but ultimately the only truth is this: that God promised us the land as a blessing. Make sure to open your eyes to that blessing, and disregard anything that distracts you from this positive image.

Our lives are replete with countless images, many of which we perceive negatively, seeing them as burdens and insurmountable challenges. But God’s promise is that everything is good, we just need to try and see it that way and take it from there.

Particularly when it comes to Israel, the land of our heritage and destiny, there are many who choose to see it as a curse, both within the Jewish world and outside it. Our job is to remember that sight is unreliable, and we must look to see the blessings and to ensure that this is the eyewitness testimony we deliver to the world at large.

It must be the choice we make.