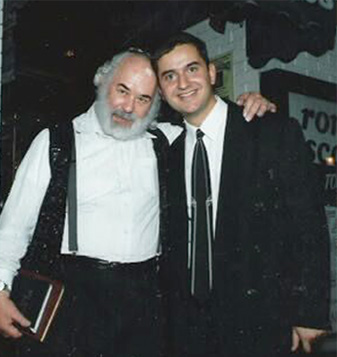 This past week I have been reflecting on something important.

Is there a red line that propels someone beyond the pale if they cross it? It is a fundamental question for all of us, and particularly for a rabbi, whose job as a representative of Judaism is to be a benign and inclusive presence, so that as many Jews as possible can feel at home in a Jewish environment and more inclined to be faithful to their roots.

I was lucky enough in my teens and early twenties to have spent a considerable amount of time with the late Rabbi Shlomo Carlebach, whose twenty-first yahrtzeit we observed a couple of weeks ago.

No one epitomized the broad tent approach more than him. His genuine affection for every Jew – and indeed, every human being – was nothing short of breathtaking. One of the most remarkable aspects of his personality, and one that I always marveled at, was his desire and ability to remember people’s names, even many years after he had met them.

“Do you remember me?” people would invariably ask him.

He would look at them for a moment, his face pensive. Then he would break into a smile.

“Sure I remember you,” he would say, “you’re Moshe, and we met in Cleveland at a concert in 1981,” or something similar.

He was almost always right. It was the mark of a man who loved people enough to make the effort not just to remember their names when he first met them and for that day, but to file their names away so that he might delight them by recalling it to them many years later.

In my own interactions with people over the years I have tried hard to emulate “Reb Shlomo.” His openness, his refusal to judge someone who didn’t share his views, his determination to ensure that everyone felt comfortable within a Jewish setting – these qualities have been my inspiration.

But is there a point at which unconditional tolerance becomes self-defeating?

I would like to believe that no Jew should ever be rejected or excluded. After all, whatever they do, they are still part of the family. Aren’t they? Perhaps not.

Take Gideon Levy, for example. Levy, born in Israel in 1953, is on the left edge of Israeli politics and writes a regular column for Haaretz. He considers himself to be an Israeli patriot forced to blow the whistle on his country’s ‘crimes’ against the Palestinians.

Just as an example of what this means, in a recent article he decried the indifference of ordinary Israelis towards the killing of Arab knife murderers, whom he astoundingly refers to as brave and courageous.

For Israelis, he writes, “the bleeding body [of a dead stabber] on the street is not the body of a person; it is, in the eyes of many, a carcass. But a few minutes earlier it was still a human being, with desires, feelings and dreams……how many Israelis even think about this?”

Aside from the fact that this characterization is utterly preposterous, I find it incredibly ironic that he accuses Israelis of dehumanizing Arabs when it is the dehumanization of Jews that has resulted in knife-wielding Arabs seeing every Jew as a ‘Temple Mount defiler’ and a murder target, even if they are a 72-year-old woman or a 13-year-old boy.

But the greatest irony of this ‘patriot’ is his sympathy with BDS and wholehearted support for a ‘one-state solution’.

Isaac Herzog, leader of Israel’s left wing opposition, is not a Levy fan. He recently wrote in Haaretz: “Levy…. wants the Jewish minority between the Jordan and the sea to be swallowed up by the Arab majority, so that after 67 years we turn the lights out on the state.”

So do we include Gideon Levy in our tent? Must we unquestioningly embrace him as a family member, despite his views?

Let’s take a look at this week’s Torah portion. There is almost no story in the Torah that is more disconcerting and disturbing than the narrative describing Isaac’s blessings. At face value it appears as if the blind, helpless patriarch was duped by Jacob, with the help of Rebecca.

Isaac had designated Esau as the recipient of the legacy blessings – the formal passing over of Abraham’s covenant with God to the next generation. But through a carefully orchestrated deception it is Jacob who gets the blessings, not Esau.

Does this understanding of the story make any sense? I think not.

The most obvious flaw is that if Jacob was not meant to receive the blessings why didn’t Isaac simply revoke what he had done, and redirect the blessings back to Esau? Instead, as soon as he discovers what has happened he declares: גַם בָּרוּךְ יִהְיֶה – ‘may he remain blessed!’

In other words, notwithstanding the subterfuge, Jacob would still inherit the mantle of Abraham, and Esau was out.

So what was really going on? Rabbi Samson Raphael Hirsch offers an exquisite explanation. Isaac and Rebecca were engaged in a crucial debate about inclusion and exclusion. Isaac, only wanting to see the good side of Esau, felt that he had a role to play in Abraham’s legacy – as the ‘man of the field’ who would provide for Jacob.

Rebecca disagreed. She had observed how Esav sold his birthright and then married idolaters. If he remained within, Abraham’s legacy was doomed. Only by demonstrating that it was possible for one person to embody both the ‘voice of Jacob’ and the ‘hands of Esau’ would Isaack understand his mistake.

Gideon Levy, by giving up his birthright and cavorting with idolaters, has demonstrated that he is outside the tent. He has lost the plot and joined the other team.

Such a person, and anyone like him, can never be included in the tent, and it is our duty to ensure that they never are.

Photo: Rabbi Shlomo Carlebach together with Rabbi Dunner on October 16, 1994, outside Ronnie Scott’s Jazz Club in London, where “Reb Shlomo” performed one of his last concerts, before passing away on October 20. (photo: Rabbi Dunner)