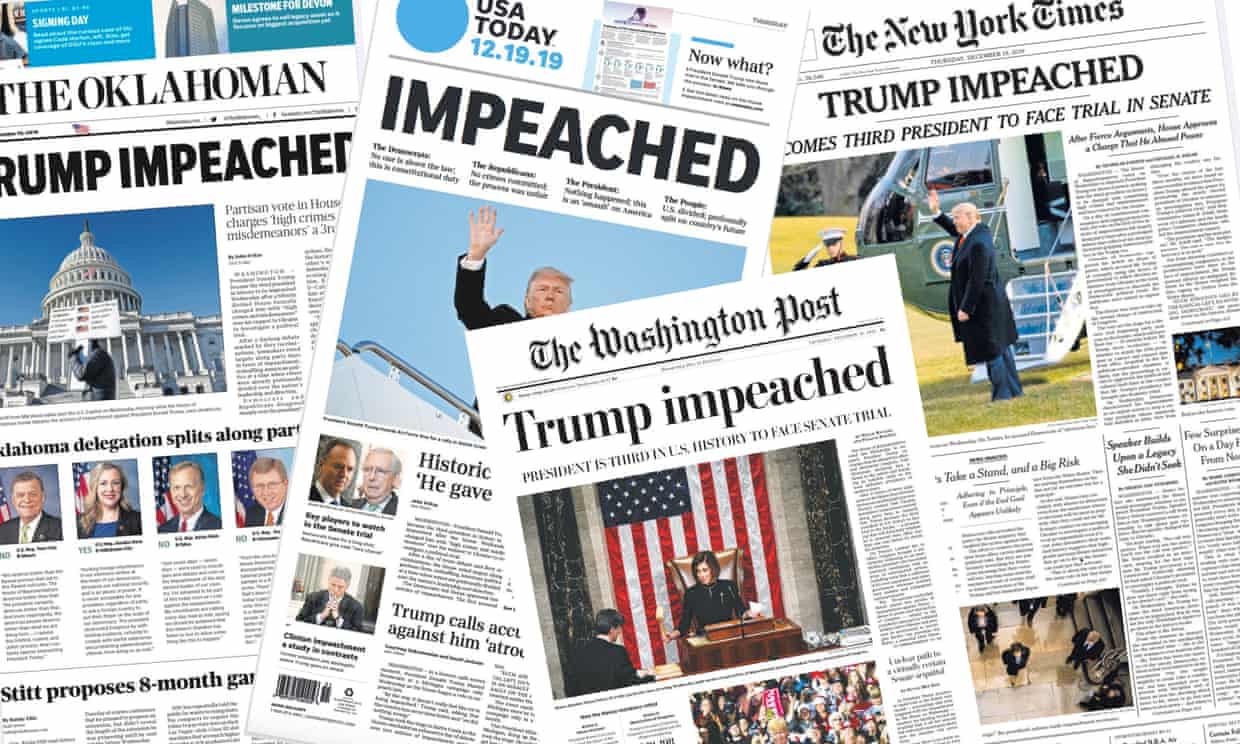 I had not planned to write about the impeachment. Frankly, along with millions of other people living in the United States, and probably the rest of the world, I am sick and tired of the endless news coverage, and the never-ending sanctimonious drivel emanating from both the president’s detractors and supporters. Despite valiant attempts on both sides to convince people of one version of events to the exclusion of any other, everyone seems to have made up their minds a long time ago.

And yet, my Twitter feed continues to produce an avalanche of indignant partisan proclamations – wasted energy that achieves nothing more than increase rancor.

Support for impeaching the president has actually diminished over the past few months, as reported in a startling article published by CNN earlier this week. In real terms, the nation is about equally divided between those who think the president should be impeached and those who don’t, and the numbers have barely shifted since this whole saga began.

But in the end, I have decided to write about the impeachment, a decision I made after watching the debate in the House of Representatives, and the unfolding situation since the articles of impeachment were voted through.

In 1972, the premier of China, Zhou Enlai, was asked what he thought about the impact of the French Revolution of 1789. He replied that it was “too early to tell”. As it turns out, he believed he was being asked about the 1968 student protests in France, not the 1789 revolution – apparently the fault of an incompetent interpreter.

Nevertheless, the reply was not without merit. Democracy, as practiced by republics, remains relatively young in human history terms, and there are anomalies that have only become apparent many years after its advent. One of these anomalies has thrust itself onto center stage over these past few weeks, and crystallized with the vote in the House, and will most likely further display itself when the Senate votes on the articles of impeachment, whenever that happens.

America’s founding fathers were acutely conscious of the dangers of a monarchy, particularly as they had to contend with George III of Great Britain, who, despite having to govern via parliament, was for all intents and purposes an autocratic dictator.

British government ministers bowed to his wishes, and short of a violent revolution of the sort that took place during the era of Charles I, who was executed by parliamentarians, there was no method of getting rid of him.

As a result, one of the key articles of the US Constitution enables the legislative branch to impeach a president for “high crimes and misdemeanors”, in order to prevent the country from suffering the consequences of a monarchical president who abuses power.

In theory, it sounds great. The trouble is, our democracy is far too young, and consequently, the impeachment process has only been road-tested three times: in 1868, 1974 and 1998.

On each of those occasions, it seems to have worked, albeit for different reasons. For example, Andrew Johnson’s impeachment, although passed by the House, never made it through the senate; despite an overwhelming Republican majority, enough Republican senators chose to vote against the impeachment to prevent a two-thirds majority in favor.

And during Richard Nixon’s impeachment process a number of significant Republican lawmakers broke ranks and refused to back him, resulting in his resignation before the House had voted. It would appear the founding fathers banked on enough lawmakers setting aside their partisan views so that the right result would ensue.

This week, setting aside whether or not the president is guilty or innocent, the notion of such idealistic impartiality has been proved wrong. In other words, while the ability to impeach a president is a great idea, the process itself is deeply flawed.

Besides for an inconsequential handful of Democrats who resisted the pressure to vote along party lines, Republicans have uniformly backed the president, and Democrats have more-or-less all favored impeachment.

Meanwhile, many senators have made clear that they are not impartial, and no amount of witnesses or evidence one way or another will sway them from their views.

Clearly the impeachment process is not as robust as the founding fathers thought it would be. And everyone involved, left to right, top to bottom – including the media – are guilty of turning an enlightened ideal into an international joke.

There is an outstanding Haamek Davar commentary at the beginning of Vayeishev. After Joseph has his first dream, he seeks out his brothers – who all despise him – to tell them about it. The Torah describes it as follows (Gen. 37:5): וַיַחֲלֹם יוֹסֵף חֲלוֹם וַיַגֵד לְאֶחָיו וַיּוֹסִפוּ עוֹד שְנֹא אֹתוֹ – “Joseph had a dream that he told to his brothers; and they hated him even more.”

Interestingly, Joseph only begins to tell them the details of the dream in the next verse. Why, then, did his brothers hate him more, even before they had heard what the dream was about?

The Talmud (Ber. 55b) teaches that one should only ever share a dream with a person one is close to. Joseph’s brothers were so certain he was their sworn enemy, as soon as he approached them with his dream, instead of seeing this as proof that he felt close to them, they suspected him of faking friendship, and of trying to lull them into a false sense of security while he undermined them behind their backs.

Notably, there was no dissenting view among the brothers – they all immediately hated him more without pausing to reflect on whether or not their assessment of the situation was correct, ultimately leading them to justify Joseph’s murder, without any consideration for the fact that they may have got themselves caught up in a false narrative.

In Jewish law, a unanimous guilty verdict in any capital case would result in a not-guilty verdict. Essentially, if nothing exculpatory can be found to say about the accused, something must be wrong with the judges.

Any judicial process which is forced to rely on jurists who have made up their minds about the verdict before the process has even begun is a broken system – whether their view of the accused is guilty or innocent.

However positive our democratic system has proved to be in just under 250 years, it is still “too early to tell” if it is strong enough to withstand the body blow of this flawed impeachment process.

The lesson of Joseph’s brothers is simple: if you refuse to be impartial or open to alternative viewpoints, you are treading on very dangerous ground.