PRELUDE TO A BETTER FUTURE 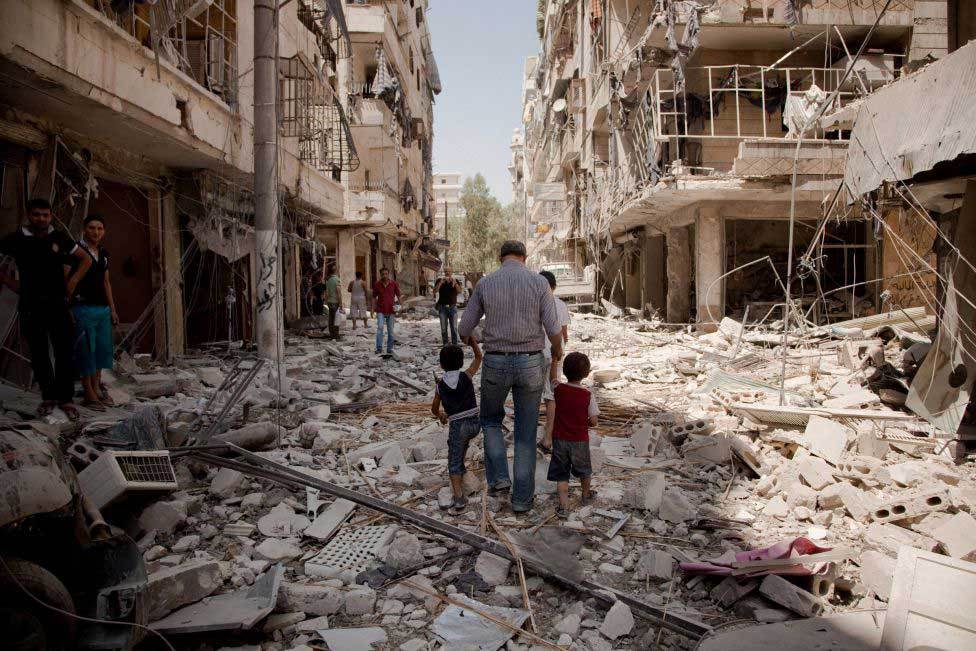 The destruction of Aleppo in Syria and the wanton murder of its citizens has once again been dominating the news.

This ancient city, purportedly one of the oldest continuously inhabited places on Earth, has witnessed many wars, and been a part of many empires. For millennia Aleppo lay at the heart of the international “silk road,” the famous trade route connecting China with the Mediterranean Sea.

After the completion of the Suez Canal in 1869, Aleppo’s status declined, and except for a brief stint as the capital city of the State of Aleppo in the early 1920s, until recently it had receded completely from view, and particularly after the 1961 coup d’état that brought the Baathist regime to power in Syria.

So it would have remained had Aleppo not taken central stage in the vicious Syrian civil war that has raged over the past six years. Beginning in 2012, the city began its descent into what can only be described as a living hell, occupied by Islamic extremist rebel forces opposed to President Bashar al-Assad, and subjected to a stranglehold siege and ruthless bombardment by the Syrian Army, assisted by their Russian and Iranian allies.

The indiscriminate killing of civilians has led to over 30,000 deaths in four years, and this week it was reported that the Syrian Army, who claimed to have finally retaken the city after offering rebel militants and their sympathizers safe passage out of Aleppo, were shooting civilians in cold blood, including women and children, as they conducted mopping-up operations in neighborhoods now under their control.

The world at large has stayed silent as the Aleppo atrocities escalate. Despite widespread revulsion, the lack of affinity with either of the warring sides has left western democracies in a dilemma that has become ever more frequent with localized wars in the early twenty-first century: who does one support to win, when one would prefer both sides to lose?

There is no greater ideal at stake, as there frequently was during the Cold War era, and with the shambolic strategic errors associated with the Iraq War still casting their toxic pall on international affairs, the idea that western meddling will improve matters seems so remote and fanciful, that the world has opted to get on with its life as Aleppo burns and its civilians are slaughtered in the full ‘real-time’ view of satellite feeds and social media posts.

Over the past couple of weeks there have at least been rhetorical attempts to address the Aleppo disaster. At a meeting of the U.N. Security Council this week — which ultimately failed to adopt any resolution to end the suffering of civilians in Aleppo — the U.S. Permanent Representative, Samantha Powers, delivered an impassioned statement, declaring that Aleppo would “join the ranks of those events in world history that define modern evil and stain our conscience decades later.”

“Are you truly incapable of shame?” she asked the Syrian regime, together with its Russian and Iranian allies. “Is there literally nothing that can shame you? Is there no act of barbarism against civilians, no execution of a child that gets under your skin, that just creeps you out a little bit? Is there nothing you will not lie about or justify?”

Although these words strike an emotional chord for all champions of freedom and human rights, essentially it is all empty grandiloquence, as President Obama has deliberately avoided taking any kind of proactive role in the Syrian maelstrom.

How can Americans point a finger at Syria or Russia when they have been absent for Syrians in Syria throughout the civil war?

And not just for Syrians. The United States is the world’s most powerful nation, a status that carries with it responsibility and duty, but over the past eight years it has all but disappeared from view, having taken a back seat approach to international affairs in a policy that has inevitably allowed violent turbulence to escalate and vicious despots to prosper.

I was struck by an interesting insight into Jacob’s attitude towards his imminent confrontation with his twin brother Esau at the beginning of the Torah portion of Vayishlach, that brings this folly into sharp focus.

After more than thirty years away from Canaan, and from the brother who had vowed to kill him, Jacob had finally returned home with his large family and the great wealth he had amassed abroad, and was imminently going to face his nemesis, Esau.

The Torah informs us that Jacob was very anxious about the meeting (Gen. 32:8):

The commentaries struggle with this statement. After all, God had promised him even before he left that he would be protected when he returned.

So why was he overwhelmed with such fear?

The nineteenth century Hasidic leader, Rabbi Isaac Meir Alter of the Ger Hasidic dynasty (1799-1866), offers a compelling answer in his remarkable commentary on the Torah. Rather than the fear and distress being an involuntary emotional reaction, he suggests that Jacob caused himself to be afraid, and consequently to be proactive in his defense.

The greatest threat to peace and goodness is not war – it is complacency and hubris. Jacob could certainly have relied on God’s personal assurance that he would be protected from any harm.  But the stakes were too high. It was not just about his own personal safety. Jacob’s confrontation with Esau amounted to nothing less than assuring the future of mankind.

Brutality and evil would have to be subdued if the message of God was to prevail and thrive. Jacob urgently felt the need to actively defend his mission, so that monotheism would triumph over the dictatorship of malevolent God-denial represented by Esau. This assignment needed to fill him with trepidation.

It is the responsibility of ensuring the survival of freedom and a humane society that should be alarming the free world when it comes to places like Syria, Iran, Russia, and every country who perceive western reticence to involve themselves in the protection of innocents as the proof that evil can prevail.

Unless there is a drastic change of attitude, the future of mankind truly hangs in the balance.

Photo: The ancient city of Aleppo in ruins, 2016 (source: ihistory.co)