PEACE IS NOT ALWAYS A VIRTUE 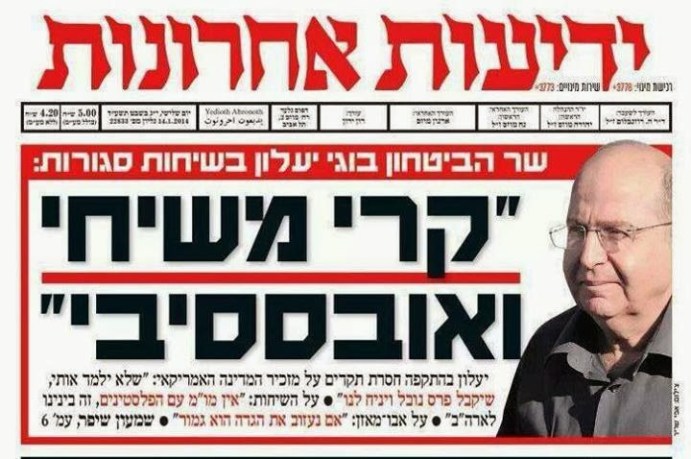 It was reported this week that Israel’s Defense Minister, Moshe Yaalon, had lambasted US Secretary of State, John Kerry, for his role in the ongoing Middle East peace process, accusing him of acting out of “incomprehensible obsession and Messianic fervor.”

His remarks, which reflected Israel’s growing concern that its greatest ally is going soft on the country’s security in its determination to conclude a peace deal, caused great concern in Washington.

Apparently, Mr Kerry was extremely offended. Mr Yaalon was forced to apologize, and no doubt behind the scenes there was a lot of feverish diplomatic activity to smooth things over.

It is a fact, however, that the citizens of Israel, and Jews around the world, have the right to be worried about how much the State Department is willing to compromise and concede just to achieve “peace.”

In the early nineteenth century there was a terrible dispute between two famous rabbis. As the rhetoric escalated, there were a number of community activists – who held both rabbis in high esteem – who tried to make peace between the two luminaries.

The peacemakers arranged to meet one of the interlocutors and made efforts to appease him. He listened carefully to their arguments in favor of settling the dispute, and then responded by quoting a verse from the Torah portion of Yitro.

As part of the management advice he gave his son-in-law, Moses, Jethro told him to appoint leaders who were “able men, who fear God, men of truth” (Shemot 18:21).

The rabbi pointed out that although Jethro mentioned quite a number of characteristics required of the proposed new appointees, he did not mention that the elders had to be “men of peace.” Surely, asked the rabbi, if the nascent Jewish nation was to survive and thrive, it would need its leadership to be men of peace? So why the glaring omission?

The rabbi paused, smiled, and then explained to his well-meaning visitors that peace on its own is not a virtue. Someone who wishes to lie and flatter, or to appease, and then absorb any repercussions or consequences, can probably remain at peace with everyone.

However, when you have decisive qualities and when you are truly virtuous and principled, you are ready to stand up for what you believe in, and may be forced to fight those who oppose you.

But such disputes do not pose any danger, said the rabbi. They are not a threat to peace. If anything, the peace that emerges out of such a dispute will be enduring and real, not vacuous and superficial.

The peacemakers left the rabbi empty handed. He clearly did not see any reason to flinch from his principled position, while at the same time he felt no personal animosity towards the other rabbi, only the need to correct his views, or the effect they were having on the community. He was following Jethro’s sage advice to Moses –and so should we.

Israel has nothing to apologize for. In the end it is Israeli citizens who have to live with a peace deal, not Washington politicians.

Peace is not a virtue in-and-of-itself. A peace that is the result of dangerous compromises between Israel and the Palestinians could have been signed and delivered years ago, but might well have meant the end of the State of Israel. That is not peace, it is national suicide.

May God defend Israel from all its enemies.