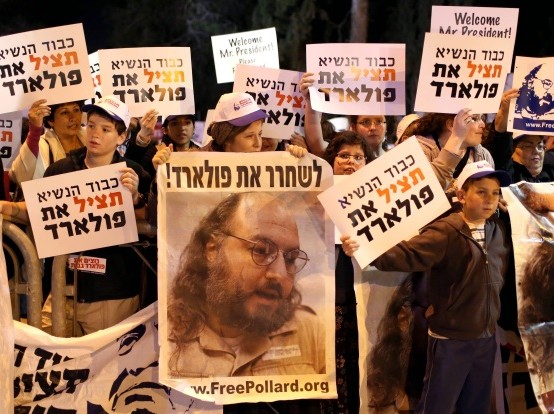 He is surely the most infamous spy of modern times.

Jonathan Pollard, who spied for Israel during the 1980s while he worked at US Naval Intelligence, was convicted in 1987, and sentenced to life imprisonment. Time after time his case has come up, and calls for clemency have gathered pace over the years, even among those who loathe the fact that Israel used a US-born Jew to spy on its closest ally.

Pollard himself is not an endearing victim – he is no Andrei Sakharov or Natan Sharansky. Nevertheless, a consensus has built up over the years that he has paid his price, and that no purpose is served by his continued incarceration.

This week, in a desperate attempt to prevent the collapse of the Middle East Peace Process, the White House announced that plans for Pollard’s release were underway, as part of a broad range of items on the table to ensure the survival of the current talks.

Of course we only know what we are told, and we are told only what they want us to hear. We certainly cannot be sure that Pollard will be imminently released, nor even if the Israelis have agreed to include his potential release as part of the negotiations between them and the Palestinians.

To be truthful, it is not Pollard’s release itself that interests me. What really drew my attention was a number of statements made when news of Pollard’s possible release emerged.

Josh Marshall, of Talking Points Memo, a blog site that the New York Times refers to as ‘one of the most popular and respected sites’ in the blogosphere, wrote: ‘Let me just say it: No, no, no, no!’

The New York Times itself editorialized that this was a ‘desperation move’ on the part of the US, and ‘a bad idea’.

Opinion formers and peace lovers concur that the release of this solitary prisoner, even if it could potentially save the peace process, is a terrible idea.

The frightening aspect of this is that none of the people who are lining up to condemn Pollard’s potential release raised their voices or lifted their pens when Israel not only promised, but carried out the release of hundreds of Palestinian prisoners – murderers and terrorists – even as these talks have been ongoing. In fact, over the weekend, when Israel decided to cancel the fourth – yes, fourth – release of prisoners, as it became evident that the Palestinians had no interest in fulfilling their own promises, these same opinion formers condemned Israel for causing the breakdown of the negotiations!

On Passover, we are obligated to retell the story of the Exodus from Egypt, an event that took place many thousands of years ago. Not only must we retell the story, we must tell it in such a way that it becomes relevant to us. As we say each year at the Passover Seder: חַיָב אָדָם לִרְאוֹת אֶת עַצְמוֹ כְאִלוּ הוּא יָצָא מִמִצְרַיִם ‘every person is duty bound to feel as if he himself was part of the Exodus from Egypt.’

But it is easier said than done. How exactly can we relate to our ancestors at the dawn of Jewish history?

It seems that in order for us to understand who we are as Jews, we must understand the hypocrisy of ancient Egypt, and of its leader. While projecting himself as a deity, Pharaoh knew that he was nothing of the sort. He demanded justice for himself and his people, but refused to offer justice or respite to those he was oppressing. He conceded at the end, but it turned out to be a purely tactical move; as soon as he had the chance he attempted the genocide of the nascent Jewish nation.

Our Exodus from Egypt represents a break with ideals that look and sound good, but in the end are used as window-dressing, and then manipulated to suit the ugly prejudices of those who promote them.

And we can apply that idea today with the same force as we have applied it at each and every point in our history. We were redeemed from slavery in Egypt so that we can identify right from wrong, and live our lives by the ideals of the Torah.

No one can teach the Jewish people about human rights, nor can they tell us anything about morality and fairness. Those who remain silent while murderers are released by the hundreds, and then raise their voices when the release of a harmless crank is proposed as a lifesaving measure, have absolutely nothing to teach us Jews.

It is the story of our Exodus, retold and refreshed every Pesach for thousands of years, which enables us to understand that.

Jonathan Pollard was released on November 20, 2015, a year and a half after this article was first published.