ONLY THE FINEST AND THE BEST WILL DO 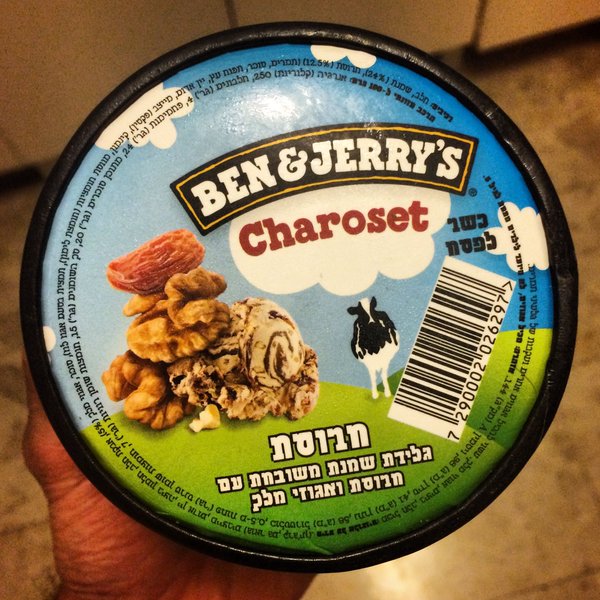 The truth is, it was probably inevitable. Two nice Jewish boys who ended up as partners in an internationally acclaimed food brand were bound to decide the need to do a Kosher for Passover product before they retired.

I refer, of course, to Ben Cohen and Jerry Greenfield, the Brooklyn-born founders of the world’s quirkiest ice-cream brand, Ben & Jerry’s, who this year launched a charoset flavored ice-cream in time for Pesach.

Perhaps not so surprising if you consider the frankly staggering Passover product statistics as detailed by Lubicom, the leading marketing consultant for the kosher food industry. Apparently, the Passover product business is worth a cool $2.5 billion in North America alone. Matza sales alone top $86 million in the US.

Who knows – perhaps Ben and Jerry had nothing to do with the blatant exploitation of Pesach by their eponymous company. After all, Unilever obtained a majority stake in their business in 2010, and since that time has relentlessly pursued every possible avenue to capitalize on the frozen dessert company’s idiosyncratic image.

Charoset flavored ice-cream certainly fits with the business model. And if this new flavor is successful – perhaps next year we will see a full range of seder-night themed flavors – karpas, afikoman, arba kosot – the sky’s the limit!

I must admit that while shopping for Pesach this morning I felt besieged by every manufacturer of Passover products, all of whom seemed to be greedily tempting me with countless familiar looking products, each one of them exponentially more expensive than their non-Passover counterparts.

Every year I am asked how it is that rabbis “allow” such exploitation, as if rabbis are somehow responsible for manufacturers who respond to the insatiable public demand for Passover products that are identical in every respect – including packaging – to their non-Passover versions.

Instead, just buy an ample supply of raw potatoes before Pesach, and cook and eat them over the festival as potatoes ought to be eaten. In the meantime, once the festival is over, you can eat as many chametz Cheerios and as much proper Pizza as you want.

However, when it comes to Seder night, and the obligatory foods of the seder, the halacha is very explicit. You need to buy the best, even if it is more expensive.

For example, don’t drink grape juice for the Four Cups if you are healthy and able to drink proper wine – even if the wine is more expensive. And if you have a choice between ‘kiddush wine’ and a decent table wine, you should use the table wine, even if it will set you back more money.

In order to understand why, let us look at the Torah portion of Tzav. We begin with a commandment about the mandatory daily animal sacrifice known as ‘Korban Tamid’:

As opposed to all the other sacrifices, where Aaron and his sons were merely told what to do, for this sacrifice Moshe was asked to ‘command’ the priests. Why?

The medieval commentator Rashi explains that the priests needed to be compelled to do this particular mitzvah properly, as the Korban Tamid was paid for by public funds, and the priests might therefore feel the need to be frugal. This prudence would inevitably result in a lowering of the quality of the animals used for the daily sacrifices. For this reason he priests needed to be given strict instructions to buy the best, and only the best.

Rashi’s rationale seems somewhat counter-intuitive. For one thing, it wasn’t the priest’s money; the Tamid was paid for from public funds, collected specifically for this purpose.

Secondly, why would the priests even dream of being parsimonious? Surely they would want to perform the mitzvah in the best possible way.

The answer lies in the dual nature of most mitzvot, a duality lacking in this daily offering.

All mitzvot involving physical objects have both a physical and a spiritual component. The physical component involves some sensation that benefits the person involved – in the case of a sacrifice, a part of it was eaten.

The spiritual component is the intent, and for a sacrifice, also the part that was offered up to God. Unlike most sacrifices, the daily Olah sacrifice was completely incinerated on the altar. As a result of this, the priests might have felt that the physical element was less consequential, with the focus entirely on the spiritual.

As it was all going to God, what difference would it make if the animal was cheaper? All that mattered was the intent.

The Torah needed to make sure they understood that even if something is used purely for mitzvah purposes, it must still be of the highest quality.

God placed us in a physical world and gave us an appreciation of quality and beauty so that we can discern the best, and serve Him better by using it.

Similarly, when it comes to Pesach, one might think – it’s only matza, who cares? The Four Cups is only a ritual – sweet Kiddush wine will do.

For this reason we need to be told – absolutely not! In the service of God, we must use only the finest and the best.