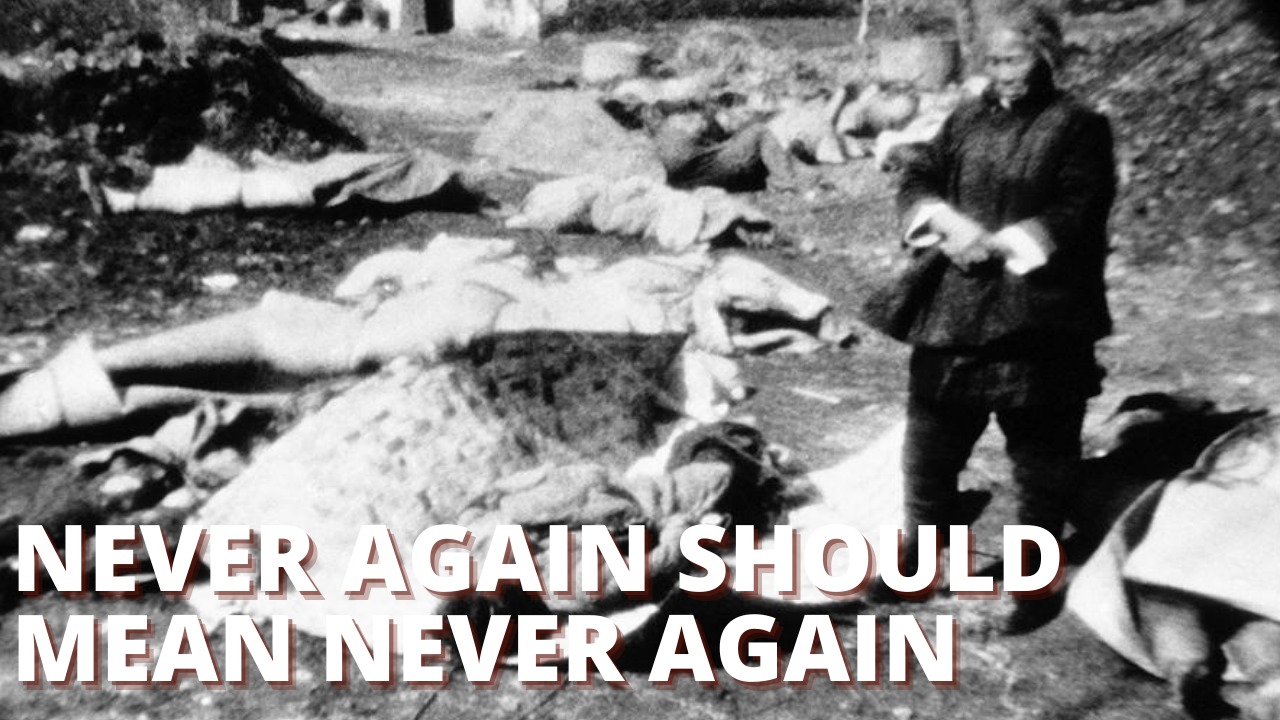 Late last year, someone sent me the link to an editorial piece published in the South China Morning Post, Hong Kong’s primary English-language media outlet. “For the sake of peace, do not forget Nanking,” ran the headline, and the article went on to appeal for this pre-Second World War atrocity to be remembered, so that it wouldn’t happen again.

The article was striking – and made all the more so by its prescient appearance just a few weeks before Russia’s brutal invasion of Ukraine. After all, does remembering wholesale genocide and wartime atrocities truly prevent their reoccurrence? It is a question that haunts me, and particularly so this week, when I flew to Jerusalem to attend the Holocaust memorial event at Yad Vashem, staged every year to coincide with the eve of Yom Hashoah.

The genocide widely remembered as the “Rape of Nanking” took place in the early stages of the Sino-Japanese War in 1937. The Chinese government under Chiang Kai-shek had been operating out of Nanking, a city west of Shanghai, but Japanese forces forced them to evacuate, and in December 1937 overran the city.

Over the next few weeks, Japanese soldiers systematically perpetrated mass executions of civilians and tens of thousands of rapes. It is estimated that 300,000 people were killed in just 6 weeks, and the Japanese also looted and destroyed numerous buildings, obliterating urban structures and leaving a dystopian landscape in their wake.

But as shocking as this story is in retrospect – and it was also widely reported at the time, with newsreels and photos vividly showing the Japanese atrocities – far more shocking is the fact that aside from a few indignant editorials and some muted condemnations, by-and-large the world looked the other way.

Most egregious was the response of President Roosevelt, who, despite his reverence for China, presided over an isolationist policy that ruled out American intervention. Japan was watching, and so was Germany.

Less than 2 years later Germany marched into Poland and began the wholesale slaughter of Jews, while Japan saw the United States as low-hanging fruit, which resulted in the devastating attack at Pearl Harbor exactly 4 years after the Nanking atrocity.

Perhaps both of these violent autocracies could have been halted in their tracks had the world reacted differently in 1937, and particularly had the United States reacted more forcefully when news of the genocide emerged.

The reason the Nanking story is so relevant today – and why for China to officially memorialize it amounts to nothing more than hollow sentimentalism – is because remembering a genocide has no meaning if similar genocides continue to occur and the world’s reaction is largely the same as it was in 1937.

Russian atrocities in Bucha have been put on display for all to see, and just wait until we see what butchery the Russians have perpetrated in Mariupol – I dread to think. And yet, life goes on, and the world has done far too little, far too late, to prevent these atrocities from taking place in real-time, even as the evidence of deliberate Russian genocide in Ukraine has mounted overwhelmingly.

Vladimir Putin is cut from the same cloth as Second World War-era Japanese and Germans – a determined autocrat with absolutely no regard for human life, who perceives the world as unwilling to do what it takes to extinguish his nefarious ambitions.

This week, as I attended the program at Yad Vashem, I recalled speaking to my late father on his cellphone as he attended the sixtieth anniversary of the Auschwitz liberation in January 2005. Remarkably, he told me he had just been introduced to Vladimir Putin, who had spoken during the ceremony.

In his short conversation with Mr Putin, my father brought up the case of a Russian Jewish leader who had been barred from returning home on the basis of some trumped-up nonsensical pretext, and Putin agreed to look into the issue. I will never forget what my father told me: he said he had looked into Putin’s eyes, and they were the coldest eyes he had ever seen in any human being.

What was Mr Putin even doing in Auschwitz in 2005? What a mockery of the more than one million people murdered in Auschwitz that Putin was asked to speak. The Butcher of Chechnya paying tribute to “Never Again!” even as he proactively presided over the wholesale murder of Chechen civilians – by 2005, there were over 250,000 civilian casualties as a direct result of Russia’s invasion.

Chechnya was Russia’s Nanking; no one took too much notice, and now we are witnessing an “action replay” in Ukraine. And Ukraine is the next level Nanking; a muted reaction, or an inadequate reaction, will result in “action replay” Nankings elsewhere – and not just with Russia as the aggressor.

Which brings me back to the Yom Hashoah event at Yad Vashem. Six Holocaust survivors were meant to be there to light one of six flames, with each flame representing one million of the six million Jews who were murdered. But by the time the event came around this week, one of them had died, and his son was there instead.

Within a matter of a few short years there will be no more survivors. Nevertheless, the message of Yom Hashoah will remain strong and meaningful – because it is not about sentimentalism. Rather it is – as the full name of this commemorative day suggests – a “Yom HaZikaron laShoah ve-laGevurah,” a day of remembrance for the Holocaust, and for courage. Of course we remember those who died, but remembering them will only have meaning if we have the courage to battle Hitler’s heirs when they rear their ugly heads today.

The portion of the Torah that charts the ritual activities of Judaism’s holiest day, Yom Kippur, is called Acharei Mot. It begins with a brief but poignant mention of Aaron the High Priest’s two sons, who had recently died at the hand of God, having desecrated their ritual duties, thereby contaminating the Temple.

The second doctor is far more effective than the first, says Rashi; by contextualizing the instruction as a warning of the consequences of ignoring the problem, the patient is far more likely to respond. Aaron was devastated by the death of his sons; by correlating Yom Kippur with the loss, Aaron’s memorial became meaningful and constructive, not just an empty, soul-gnawing source of melancholy.

It is said that we study history to learn from the mistakes of the past. Except that we never do. We should and we must. Because remembering the past is meaningless if it has no consequences for the present so that we can ensure a better future.