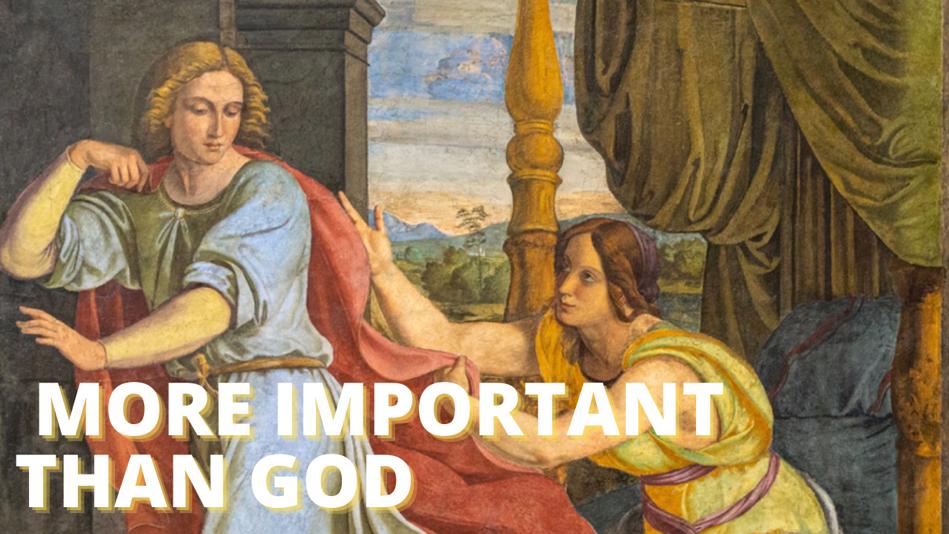 One of humanity’s most ancient tensions is the choice between our duty to God and ensuring that our behavior towards others is the paradigm of perfection.

Historically, morality and religion were portrayed as synonymous – because if God wants it, it must be moral – but there are numerous instances where the gulf between one’s duty to God and to fellow man is so wide that trying to reconcile the two is, for all intents and purposes, impossible. Frequently, those who consider themselves religious allow their God-devotion to overshadow human compassion, believing that faith justifies oppressing the unfaithful.

Judaism is no stranger to this tension – and on the face of it, God comes first. For example (Bava Metzia 30a), if a kohen walks past a cemetery and spots an item lost by its owner, he cannot forsake his state of ritual purity to observe the mitzva of hashavat aveida, although returning lost property is a Torah-mandated law, and crucial for the functioning of a just and civil society. God, it would appear, takes precedence over man.

Nonetheless, there are laws that defy this pecking order. Most famously, saving a life takes precedence over any Shabbat prohibitions (Shabbat 151b). One might think that this is only because loss of life is involved, but even seemingly less consequential considerations can get in the way of observing a ritual law.

For example, although the Torah mandates using four species on Sukkot, we are not permitted to utilize a stolen lulav (Sukkot 29b). According to most Talmud commentators, this is because it is inconceivable for a mitzva to be carried out at someone else’s expense. Apparently, in this instance, and others like it, man comes before God.

Interestingly, Joseph makes a statement in Parshat Vayeishev which reflects this theological conundrum, and the way he expresses himself helps explain how man comes before God. After Potiphar’s wife had arranged for them to be alone together, he refused to succumb to her advances, spelling out his reasoning as follows (Gen. 39:9): “There is no one greater in this house than I, and [your husband, my master] has denied me nothing but you, since you are his wife. How then can I perpetrate this great evil? I will have sinned against God!”

At first glance, Joseph’s rebuff of Potiphar’s wife is a little confusing. Is he concerned with betraying his master, or is he worried about sinning against God? And if it is both, why does God come second? Surely, God should come first!

In the foreword to Even Sheleima, the Gaon of Vilna presents a very powerful idea about our obligation to observe mitzvot: the foundation of every mitzva, whether it is a ritual mitzva or a human-relations mitzva, must always be ethics and morality. In fact, if a mitzva has not improved your character, it cannot have been executed properly.

In Joseph’s situation, adultery with his master’s wife was certainly an affront to God, but first and foremost it was a betrayal of his master. Joseph was saying something very simple: if the only reason you abstain from immoral behavior is religion, you’ve missed the point entirely. And if it’s all about God and not about ethical behavior, you might end up stealing a lulav, or even murdering another human being, to ingratiate yourself with God. But human suffering can never be justified by citing God as an excuse. Or, as Abraham Joshua Heschel once put it so well: “if I hurt a human being, I injure God.”

Rabbi Yonason Eybeschutz (1690-1764) is best remembered for the period towards the end of his life when he was the foremost rabbinic leader and scholar of European Jewry. Earlier on he was not so well known, and it was during this period of youthful obscurity that he once found himself unable to get back home for Yom Kippur. Instead, he had to stay in a small town some distance from where he lived. Concerned that his prayers would suffer in this unfamiliar environment, he looked for a seat at the local synagogue where he would be able to pray properly. At mincha on Erev Yom Kippur afternoon he looked around the shul and noticed a man who was deeply engrossed in his prayers – a true paragon of devotion.

Rabbi Yonason arrived early for Kol Nidre and sat as close to the devout man as he could.  Sure enough, this man’s prayers were filled with emotion and piety. “I am but dust in my lifetime,” he sobbed, his body shaking with emotion, “and even more so in my death!” Rabbi Yonason was inspired, and the following morning he returned to the same seat near the man, thankful to have found such a saintly prayer partner. As the morning unfolded, the man continued to pray with utter dedication and concentration, particularly for parts of the prayer that focused on his insignificance.

After shacharit was over, the Torah reading began. All went smoothly – until the third aliyah. The gabbai didn’t call the man next to Rabbi Yonason to say a blessing over the Torah, instead giving the aliyah to someone else. The man went red in the face, and without warning stood up and yelled: “Him? You’re giving him the third aliyah?”

The shul went dead quiet. “Why is he better than me?” the man continued shouting, “I am a greater scholar than he is! I give more charity than he does! Why are you putting him before me?” No one said a word. But Rabbi Yonason, never one to hold back, was undaunted. “I don’t understand you,” he said to the man, “last night and the whole of this morning you’ve been declaring in your prayers how insignificant you are, and now you are demanding an aliyah before this other guy because you’re more significant than him? I’m sorry, but you’re not making any sense. Are you insignificant? Or are you significant? It can’t be both!”

The man looked at Rabbi Yonason Eybeschutz as if he had just dropped from the moon. “Don’t you understand,” he said, “when it comes to God, I am like the dust of the earth… but compared to this guy – are you crazy?”

This story should remind us how all too often we lose sight of the fact that the only route to a relationship with God is via our relationship with those around us: our family, our friends, our community, those we interact with at stores, banks, airports – and in every given situation. If we are only focused on God to the exclusion of our fellow man – always putting God before man instead of man before God – nothing we do for God will ever amount to anything.