MESSAGE FROM A DESERT 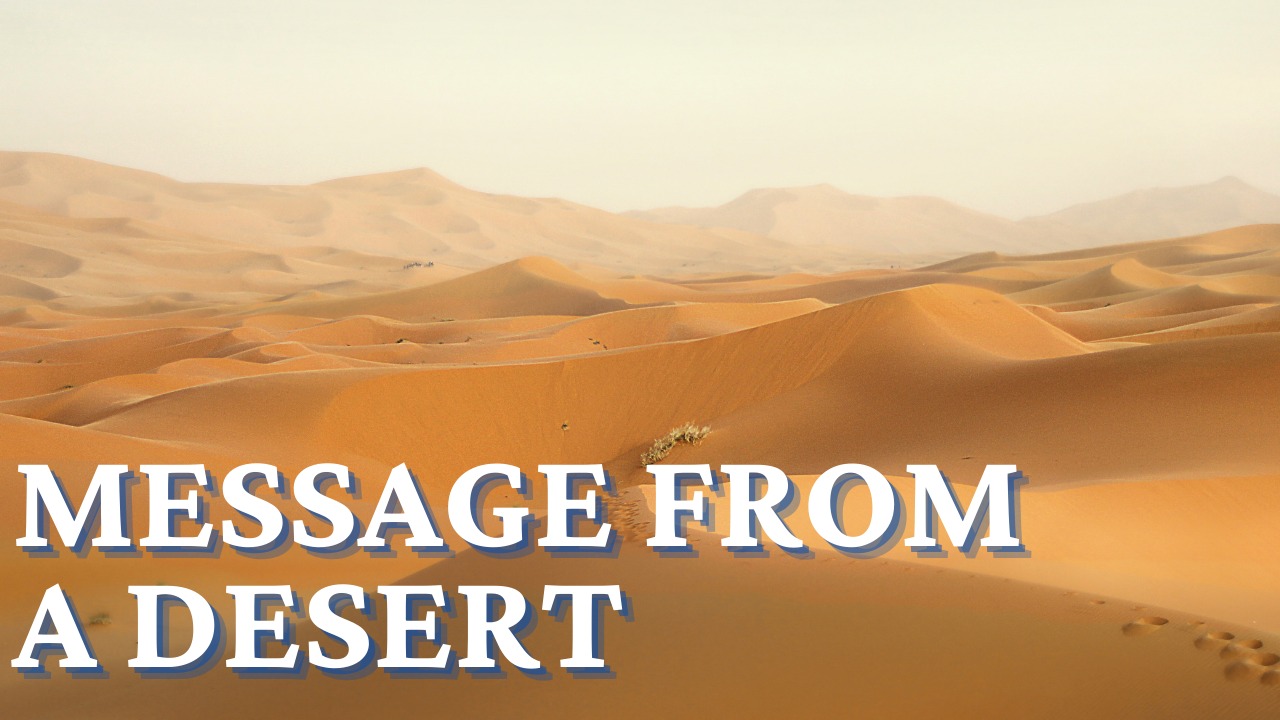 I learned some interesting facts about deserts this week. The first fact is probably the most astounding one of all – did you know that deserts cover about one-fifth of Earth’s land area?

And here’s another astounding fact: considering that the word ‘desert’ is derived from the fact that deserts are thought of as vast, ‘deserted’, empty spaces, it was a shock to discover that deserts across the world are inhabited by around 1 billion people, amounting to one-eighth of the Earth’s population.

According to National Geographic, a desert is best defined as an area that consistently receives low annual precipitation – namely, no more than 10 inches (25 centimeters) of rain a year, and often much less.

Deserts are usually thought of as “very hot”, but although it is true that some deserts are extremely hot, with temperatures that can exceed 130°F (54°C) – such as the Sahara Desert in North Africa – there are also vast deserts that have very cold climates, the best-known being Antarctic and the Arctic ice cap.

Astonishingly – although perhaps not such a surprise, with what we now know about the dramatic effects of climate change – deserts today were not always deserts in the past. For example, in prehistoric times, the Sahara Desert enjoyed a mild, moist climate, and there is even archaeological evidence of human settlement, including art, burial locations, and manufactured implements.

But now, in the very same parts of the Sahara that were once full of humans, fauna, and flora you will find windswept, sun-parched sand dunes – areas incapable of supporting life. Although, as it turns out – that is not quite true.

Most deserts are not quite as uninhabited and as lifeless as they seem. In fact, they are home to a range of very specialized plants and animals, all of which have adapted to life in extreme conditions. And being so precisely calibrated for life in such a harsh environment, the slightest change can spell disaster for these creatures and organisms.

One curious example is the Mohave tui chub, a fish originally native to the Mojave River that runs through the San Bernardino Mountains in California. This once vigorous waterway running through the arid Mojave Desert region was drastically diminished by the damming of its headwaters and reductions to the river’s underflow, which, in turn, resulted in the decline of the Mohave tui chub species.

The final nail in the coffin came in the 1930’s, when non-native arroyo chub fish were illegally introduced into the Mojave River by anglers as baitfish. The arroyo chub was much more suited to the now much warmer and much shallower habitat conditions in the river and as a result quickly spread through the river, ultimately replacing the native Mohave tui chubs via competition and hybridization.

And if it weren’t for the eccentric radio evangelist and self-proclaimed physician, Curtis Howe Springer (1896-1985), the Mohave tui chubs might have disappeared for good. In 1944, with the encouragement of his fiancée Helen, Springer purchased an old abandoned military outpost at Soda Springs, California, where he built a fake hot-springs resort at the now renamed town of Zzyzx – so named so that Springer’s “mineral springs resort” would always be “the last word” in health.

Springer was convicted in 1974, and eventually imprisoned, for squatting on federal land and making the false claim that his health foods would cure everything “from sore toes to cancer.” Following his conviction, the former resort was given by the Federal government to California State University, who converted the area into a research station called the Desert Studies Center, and then introduced the Mohave tui chub into Lake Tuendae, an artificial pond excavated by Springer in the mid 1950s.

The fourth book of the Torah is known as “Bamidbar”, which means “in the desert” – a reference to first verse of the book: וַיְדַבֵּר ה’ אֶל מֹשֶׁה בְּמִדְבַּר סִינַי – “God spoke to Moses in the Sinai Desert.”

The commentaries offer a range of explanations for this unusual mention of a geographic location, with the consensus among them being that during the entire first year after the Torah was given, all instructions from God to Moses were given on Mount Sinai, whereas once the Tabernacle temple was constructed, and over the next almost forty years, God’s communications with Moses occurred in the Tent of Meeting, wherever it was located in the Sinai Desert.

But while this very literal understanding of the “desert” reference offers a practical explanation for the inclusion of the geographic location in the opening verse, it does not explain why the Torah’s foundational instruction had to occur in a desert environment rather than in the Land of Israel.

A clue to the answer can be found in the Talmud (Eruvin 54a), which offers an explanation for a verse later on in Bamidbar (Num. 21:18): וּמִמִּדְבָּר מַתָּנָה – “and from Midbar (‘desert’) to Matana (‘gift’).” The Talmud informs us that this verse contains a profound lesson: if someone humbles themselves like a desert, then their Torah study will endure and be given to them as a gift. But if not, says the Talmud, their Torah will not endure.

In numerous places, traditional sources compare Torah to life-nourishing water – without which we would perish from thirst. But nowhere is this analogy more resonant than in a desert, which is where water is so scarce – so much so, that the slightest change in the availability of water can alter our prospects or doom us into oblivion.

The Torah, which is the binding constitutional document of the Jewish people, is a spiritual water source. Utilized properly and treated as a precious resource not to be tampered with, the Torah can be a never-ending source of life. But if there is the slightest change, the impact on us can and will be devastating.

Unlike the rather lucky Mohave tui chub, those who find themselves in a precariously water-reduced environment won’t have a weird savior like Curtis Howe Springer to rescue them from extinction.

And remarkably, the Talmud is clear on this point, in its commentary on a verse in Habakkuk (1:14) that describes how God “made mankind like the fish of the sea.” Why are human beings compared to fish, asks the Talmud? Simple, it explains – just as fish cannot survive without water, people who separate themselves from the words of Torah and from doing mitzvahs are similarly fated.

Which is precisely the powerful message of Bamidbar, a book which fittingly begins on the Shabbat before Shavuot, the festival anniversary of God giving us the Torah so many thousands of years ago.