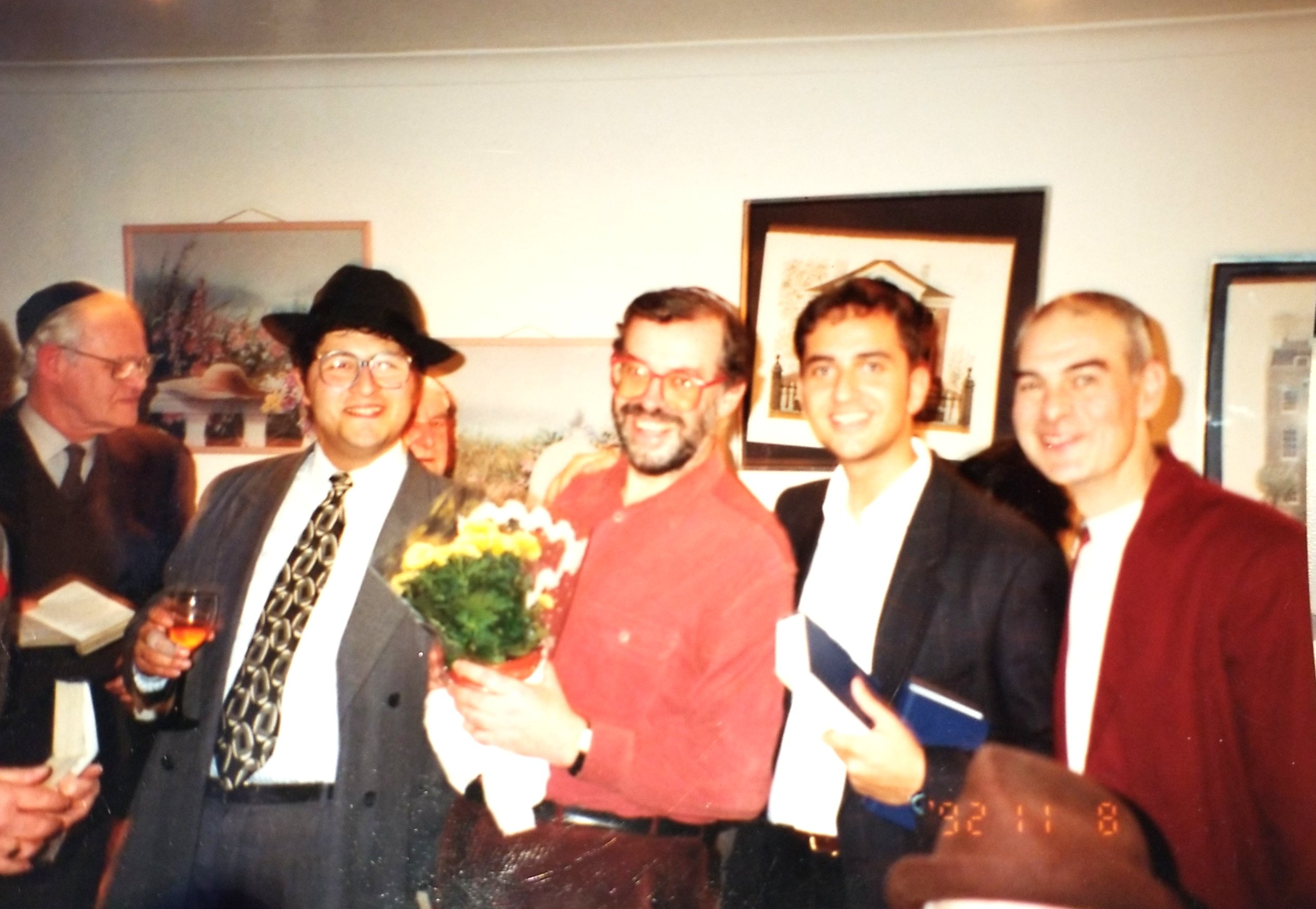 In the early Summer of 1992 I received a random phone call from a man who abruptly introduced himself as Stuart Schama, President of Notting Hill Synagogue.

I had heard of neither him nor his synagogue.

I had no idea where Notting Hill was, but at the time I was a student with no income — and £30 sounded very attractive.

The walk to Kensington Park Road from my parents’ house in Golders Green was roughly 5 miles; it took me about an hour and a quarter.

I walked into the shul and was immediately welcomed by a jovial man wearing bright red glasses. He proudly introduced himself to me as ‘El Presidente‘.

The man with the red glasses was Stuart Schama.

Stuart looked me up and down, and said the immortal words “you look like a Chozzen, and I bet you’re not bad with a Dvar Torah either!”

That Shabbat morning, this man I had never met compelled me to daven as the chazzan, I leined, and I spoke from the pulpit. All for 30 quid. And he made me feel like a million dollars.

I had never experienced a shul quite like Notting Hill. I grew up pretty sheltered as a Golders Green ‘frummer’. Notting Hill Synagogue was nothing like any shul I had ever seen. The congregants consisted of a motley group of mainly octogenarian men, characters out of some East End Jewish sit-com, each with his own catchphrase, many of them not quite sure why they were there week after week.

And Stuart was the king of this crew, like Israel Zangwill’s ‘King of the Schnorrers’.

I quickly learned why these people came. It was because Stuart relentlessly and determinedly called them, making sure they would be there so that there would be a minyan every Shabbat morning.

Often he promised Maftir to more than one of them, so that both would come. Or he invited them to his home for lunch.

He knocked on people’s doors during the week to find out if they were Jewish, wearing a t-shirt he had emblazoned with the words: “President of Notting Hill Synagogue”.

On a Shabbat morning he dragged people in off the street, or from Portobello Market, if he was short of one or two people.

Stuart was the oxygen that kept the shul going long after it should have closed down.

His infectious laugh, his salesman’s patter, and his unorthodox style were all put to good use.

“Lou, it’s no good to us if you’re sleeping,” he shouted at one poor congregant.

“Monty, do you want an aliya, darling?” he bellowed from the bimah to another.

And every week it was someone’s birthday, even if it wasn’t. Only so that Stuart could render his enthusiastic version of ‘Happy Birthday’, usually after the hapless birthday victim had finished his blessing over the Torah.

My one visit in 1992 became a weekly gig that lasted a year and a half. Stuart discovered I had trained as a rabbi, so he unceremoniously and without consultation appointed me the rabbi of the synagogue.

The change of status meant I now got £50 instead of £30 a week. Occasionally I stayed with Stuart for the weekend in his tiny flat on Shrewsbury Mews. Those weekends were something to remember. Strange guests and even stranger conversations, all presided over by the unflappable Stuart, whose only purpose in hosting anyone was so that he could keep his beloved shul going.

I brought Rabbi Shlomo Carlebach to Notting Hill for a weekend. The concert on Saturday night was a sellout, and the recording later became a famous Carlebach album.

My Aufruf was in Notting Hill. And Stuart spoke at my wedding. He presented us with a beautiful inscribed silver goblet, which we use to this day, and I will make sure to use it next Shabbat in his memory.

Even at my wedding he couldn’t resist singing ‘Happy Birthday’. Having heard from my brother Benzi that he was celebrating his birthday that day, he took the opportunity of giving Benzi the full Notting Hill Synagogue Happy Birthday treatment.

Of course, he hadn’t bothered to check if it actually was Benzi’s birthday that day. It wasn’t. Benzi was born in May. Our wedding was in December. Benzi was having him on, to see if he could get him to sing it. And of course he did.

I never told Stuart, although, to be honest, I don’t think he would have cared.

It is fair to say that Stuart was the first person to give me the confidence to act as a rabbi in a community. He told me that I had a great future, that I was a good speaker, a wonderful chazan, a great communicator, long before any of those things was true.

Stuart gave me confidence and set me on my way. I can quite honestly say that without him, and his ‘noodging’ (the word was invented for Stuart!), and cajoling, and compliments, I might never have ended up as an outreach rabbi, or a Jewish educator, or any of the things I later became in the Jewish community and for the Jewish community.

Stuart has a share in any good I have done for the Jewish world, and he would have every right to take pride in my achievements, as he was the one who bounced me into the rabbi role, perhaps seeing something in me that I had never seen in myself.

I am grateful to Stuart. I am not sure I ever thanked him, and I should have. Sadly I lost touch with him and had not seen him for many years when I heard the tragic news of his untimely death. I am saddened by it, and feel his passing as a deep personal loss.

May his neshama have an aliya, may his family be comforted, and may his memory be a blessing.