LONDON BRIDGE IS FALLING DOWN 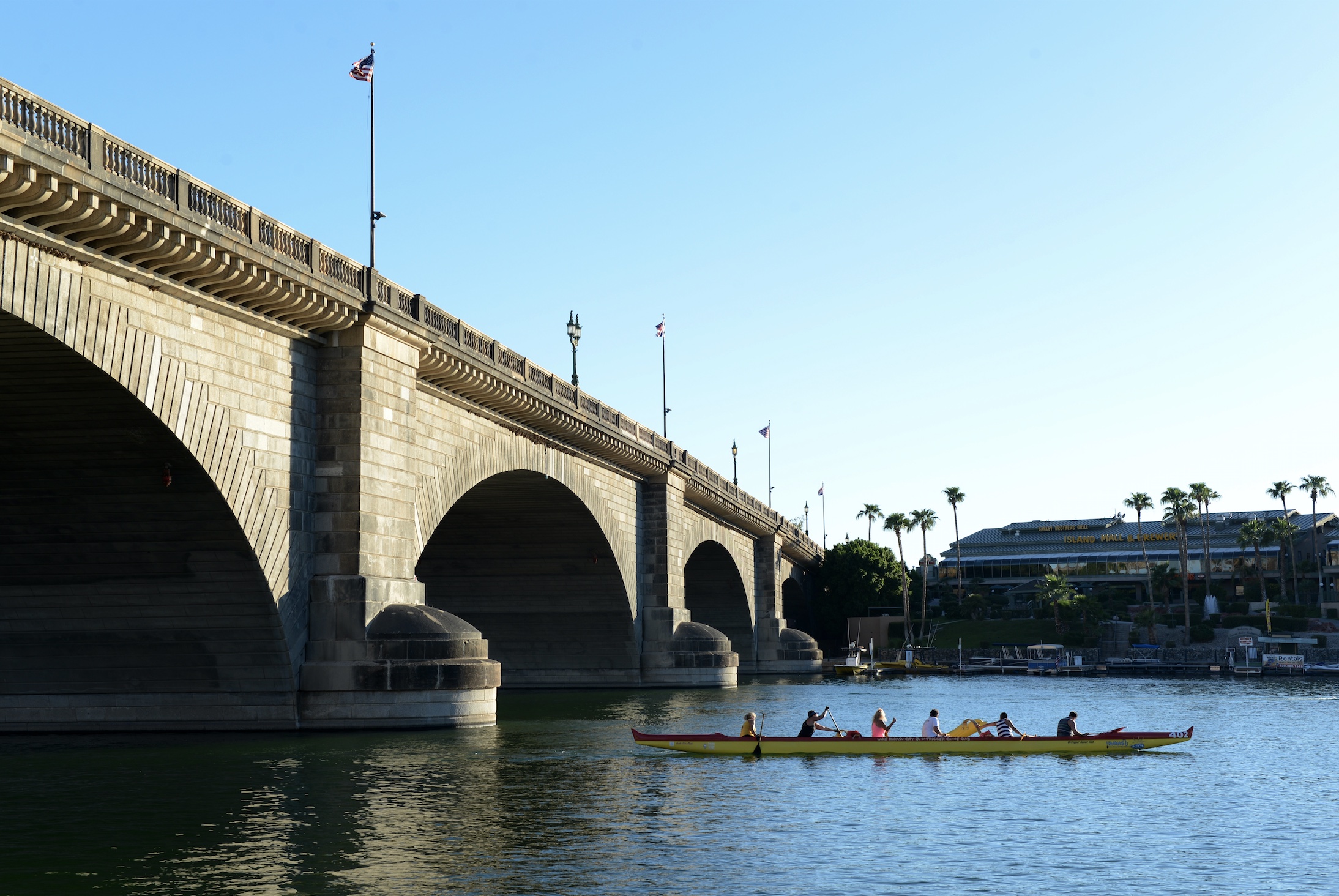 This summer our family did a very American thing – in late July, we went on a one thousand mile road trip.

There are not that many choices of places to go between L.A. and the Grand Canyon; in the end, we opted for a town called Lake Havasu City, which none of us had ever heard of or knew anything about.

Lake Havasu City, Arizona, is famous for one thing and one thing only. As crazy as it sounds, this remote Arizona retirement town is home to the original London Bridge that spanned the Thames River in central London, from the 1830s until London’s local government decided they needed a new bridge to replace it in the mid-1960s.

Enter the scene Robert Paxton McCulloch, an aging American millionaire, who had made his fortune inventing and manufacturing chainsaws. McCulloch had decided to build a new town on the shores of Arizona’s Lake Havasu, and to propel it to fame and notoriety he decided to buy London Bridge and import it from England, so that it could become the town’s centerpiece.

McCulloch purchased the bridge from the City of London in 1967, had it dismantled brick by brick, and then transported to Los Angeles via the Panama Canal, and trucked to its new home in Arizona, where it was completely reassembled. The project took four million dollars and four years to complete, and London Bridge, in all its Victorian engineering glory, can now be found in sun-parched Arizona.

I’m guessing that McCulloch wanted to leave a lasting and resounding legacy. He wanted his name to resonate long after he was dead. I thought about that when I saw the bridge, looking completely out of place and quite forlorn in the middle of this sleepy town, and I was struck by the utter futility of McCulloch’s act.

If anything I have seen in my life has made me think about what I am doing here in this world, why I was born, the futility of so much that we do in life, it has been seeing that bridge in Arizona. I cannot get the image out of my head, and in particular it helped me to understand a strange Talmudic passage that had previously always puzzled me.

The Talmud in Eruvin (13b) records a debate between the two great late Second Temple period schools of Jewish learning, Beit Shammai and Beit Hillel.

The topic of this debate makes no sense when you consider who these interlocutors were. Beit Shammai and Beit Hillel were not two schools of Greek philosophy. They were two centers of learning, with rabbis and students discussing and deciding Jewish ritual law. Why were they debating this arcane and – in terms of practical application – useless topic? And more importantly, why would the debate have taken two and a half years to resolve?

The Talmudic passage continues as follows:

At the end they voted and decided that it would have been better had man not been created. However, now that man had been created, he should check his deeds [in other words, in case he has sinned, and has to repent]; or another version has it like this: he should carefully consider his deeds [in other words, decide carefully before doing any action].

There is another related topic that has long vexed both philosophers and anthropologists. It is the debate over the default nature of human beings. Is human nature intrinsically good, or is it intrinsically evil?

If, for example, a newborn baby would not be conditioned or educated at any point from birth through adulthood, or exposed to circumstances that might steer it in a particular direction, how would that person turn out? Would he or she naturally evolve into a selfless adult, with morals and a sense of justice? Or would it turn out to be an immoral, or amoral, selfish and self-serving adult?

Of course this experiment is pure theory, hence the debate. But it is nonetheless a troubling question.

Judaism has an answer to this question, and I would propose that this answer is the definitive answer. Human beings are born with an animal body, a selfish physical entity intent on survival by whatever means necessary – just like every other animal. The difference is that humans also have a soul that resides within them, a soul that contains all the ingredients of good, of divine justice and morality.

Consequently, every human is a living contradiction, neither bad nor good. Instead we are creatures with an inclination for survival that may result in us harming others due to selfishness, but we are simultaneously possessed of a powerful potential for altruism and selflessness. All we need to do is take charge of ourselves and allow our souls to be in control.

In this material world we are at a tremendous disadvantage, calibrated to desire physical things and to act selfishly, and yet we have been given the power to overcome these desires, with our souls able to overrule our animal instincts to do good, so that we are greater than the sum of our physical parts.

Let me compare this idea to something we can all relate to – the physical force called gravity. Gravity affects us all; we cannot escape it. Nevertheless, every step we take, and every time we move, we defy gravity. Even though gravity is something we cannot escape, we still have the power to overcome it if we want, without which we would not be able to function for even a minute.

The same principle applies to our animal instincts. We can’t escape them, but we can constantly overcome them. This was the main point of the debate between Beit Shammai and Beit Hillel. The fundamental underpinning of Judaism is the performance of mitzvot, as without mitzvot our existence would be pointless. What they were looking to find out was whether or not our existence is pointless even if we do mitzvot.

Why should we be born to battle our own nature? Maybe it would have been better never to have been born at all? After all, why should Beit Shammai and Beit Hillel discuss and debate the laws of Shabbat observance, for example, or the do’s and don’t’s of ritual impurity, if there is no point in getting it right?

After this fundamental debate had raged for two and a half years, Beit Shammai and Beit Hillel finally agreed that our existence is indeed pointless – but only if what we do is just about performing the act of mitzvot. Just going through the motions and discharging one’s Jewish duty, in the same way that circus animals do the tricks they are trained to do. That can’t be right, and would not have been worth God’s effort. Only if we insert meaning into our acts, and do them because we are defying our animal instincts rather than embracing them, do our lives have any meaning.

Seeing London Bridge in Arizona made me realize that no matter how grand the gesture, no matter how spectacular the physical act, everything we do that is aimed at leaving a material legacy, even if it is not on such a grand scale, is ultimately futile.

Most people have never heard of Robert Paxton McCulloch, and even those who have heard of him, regard his decision to bring London Bridge to Arizona as farcical. And yet, we are all McCulloch, unless we choose not to be. Our acts only become worthwhile if we inject them with meaningfulness. That is the only way that we will endure beyond our lives, lasting into the spiritual realm long after our physical lives are over.

On Rosh Hashana, we resolve to inject our mitzvot with energy, spirituality and meaningfulness, so that they turn from physical acts into soul energizing deeds that will make our existence meaningful. The format of Rosh Hashana and Yom Kippur is geared specifically towards this plan. We are charged with doing three things – Teshuva (repentance), Tefilla (prayer), and Tzedaka (charity).

Teshuva is checking one’s deeds – our existence is not justified unless we reflect on who we are and how we can improve ourselves. Tefilla and Tzedaka mean that we need to consider our deeds before we act. By resolving to act appropriately both in our relationship with God, and in our relationship with our fellow human beings, being on this world suddenly begins to make sense.

Teshuva is a very personal thing – it is private and complex. Tefilla and Tzedaka are public manifestations of our relationship with God and man, and they come together best in a community setting where they are combined with each other, and where one cannot exist without the other.

May we merit a year of blessings and of growth, in both our spiritual and material lives, so that we can all serve God and our community to the best of our ability, and for His greater glory.