LEARNING TO SPEAK THE LANGUAGE OF GOD 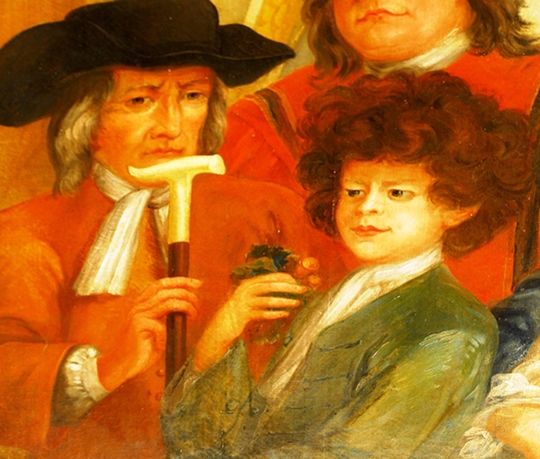 In the summer of 1725, a group of hunters near Hamelin, Lower Saxony, spotted a strange looking creature, unlike any animal they had ever seen before.

Rather than kill it, they decided to trap it, only to discover that the animal they had caught was actually a human boy.

The feral child was aged roughly ten or eleven years old, wore no clothes, and was unable to speak. He appeared to have been living wild for years, feeding on berries and other vegetation, and he moved around on all fours, just like a monkey.

The news of this unusual discovery soon found its way to George I of Great Britain, who had a summer palace close by, near his former hometown of Hanover. The curious king sent for the boy, who he named Peter and made a member of the royal household.

Within a year, “Peter the Wild Boy” was brought to London, where he was formally introduced to the royal court on April 7, 1726. The event was a sensation. Peter, who had been dressed up in a green velvet suit, scampered around the room on his hands and knees, even bounding up to the king, as delighted courtiers gasped in amazement and applauded. Reports of Peter’s antics at the royal court were the subject of numerous articles and pamphlets, and his fame spread across England.

Soon afterwards, the celebrated painter William Kent, in the midst of decorating the Grand Staircase at Kensington Palace with portraits of the king’s favorite servants, was told to include Peter in the mural. Peter’s likeness can still be found there today.

Peter was not the first feral child to be found, neither was he the first to draw such widespread attention. Nevertheless, he was the first to be subjected to this kind of intense scrutiny in the period of history we now call the Age of Enlightenment.

Modern science and modern philosophy were still very much in their infancy, as was political satire. But all of them eagerly piled into the debate over the meaning of Peter’s strange persona, the result of his having been disconnected from civilization throughout his formative years, trying to unravel what this phenomenon contributed, if anything, to the understanding of humanity and the human condition.

Eventually King George grew tired of Peter and had him entrusted to the care of the former court physician, John Arbuthnot, who attempted to teach him to speak, with no success.

Peter was ultimately given over to the care of a farmer in Hertfordshire, and granted an annuity so that his needs would be met. He disappeared from public view, living out his life in simplicity and tranquility, and died in 1785.

Over the centuries since Peter’s discovery, a motley range of similarly feral children have been discovered across the world, inspiring literary character’s such as Rudyard Kipling’s Mowgli and Edgar Rice Burrough’s Tarzan.

While scientists initially embraced the idea of learning from feral children, more recently they have become rather more skeptical of advancing sociological or anthropological theories based on any study involving a feral child.

In the nature versus nurture debate feral children are considered an unscientific distraction, with the causes of their behavior ascribed to a range of mental health issues that have nothing to do with their time in the wild. In 2011 even Peter the Wild Boy was given a post-mortem diagnosis of Pitt-Hopkins Syndrome, although this widely disseminated theory has dubious foundations.

The one aspect of living in a retrograde environment during formative years that everyone agrees will have an irreversible effect is in the area of linguistics.

If a child does not spend time with other humans who speak a language, beyond a certain age that child will never learn to speak, even if he or she can learn to walk upright, wear clothes, and eat with a knife and fork. Interestingly, long before Peter appeared, the latent primeval dialect of humanity was the object of fascination for sophisticates and resulted in several celebrated language deprivation experiments.

The most famous of these was carried out by James IV of Scotland, who arranged for two babies to be raised by a deaf woman on the isolated island of Inchkeith. According to one version of the story the children ended up speaking to each other in Hebrew.

The Critical Period Hypothesis argues that human beings have a limited time during their earliest years to acquire language skills in a linguistically rich environment, after which it becomes very difficult, and in many cases impossible.

While this theory remains controversial, in the case of feral children who grow up with no human vernacular, the language vacuum has a permanent and irreparable effect.

This may explain both the purpose and the timing of the first test directed at Abraham by God at the beginning of Lech Lecha (Gen. 12:1): וַיֹאמֶר ה’ אֶל אַבְרָם לֶךְ לְךָ מֵאַרְצְךָ וּמִמוֹלַדְתְּךָ וּמִבֵּית אָבִיךָ אֶל הָאָרֶץ אֲשֶר אַרְאֶךָּ – God said to Avram, “Go forth from your land, from your birthplace, and from your father’s house, to the land that I will show you.”

The commentaries puzzle over the inclusion of three separate points of origin, as well as the vague destination description. It is also odd that Abraham would need to remove himself from any particular place in order to become the great patriarch. Surely a superior person is great wherever he is.

However, it appears that for Abraham to emerge as the progenitor of monotheism, and as founder of the nation that would become the ambassadors of monotheism for all time, he needed to learn the vernacular of God before it was too late. This was unachievable in an environment drowning in pagan beliefs and idol worship.

Abraham needed to extract himself totally and thoroughly from this spiritually feral setting so that he could arrive at his destination – namely, “the land that I will show you.” This was not merely a geographic location, but a place where meaningful conversations with God could take place.

Our own interactions with God are often marred by our location, and the longer we wait to extract ourselves from such an environment, the harder it will be to learn the language of God when we do.