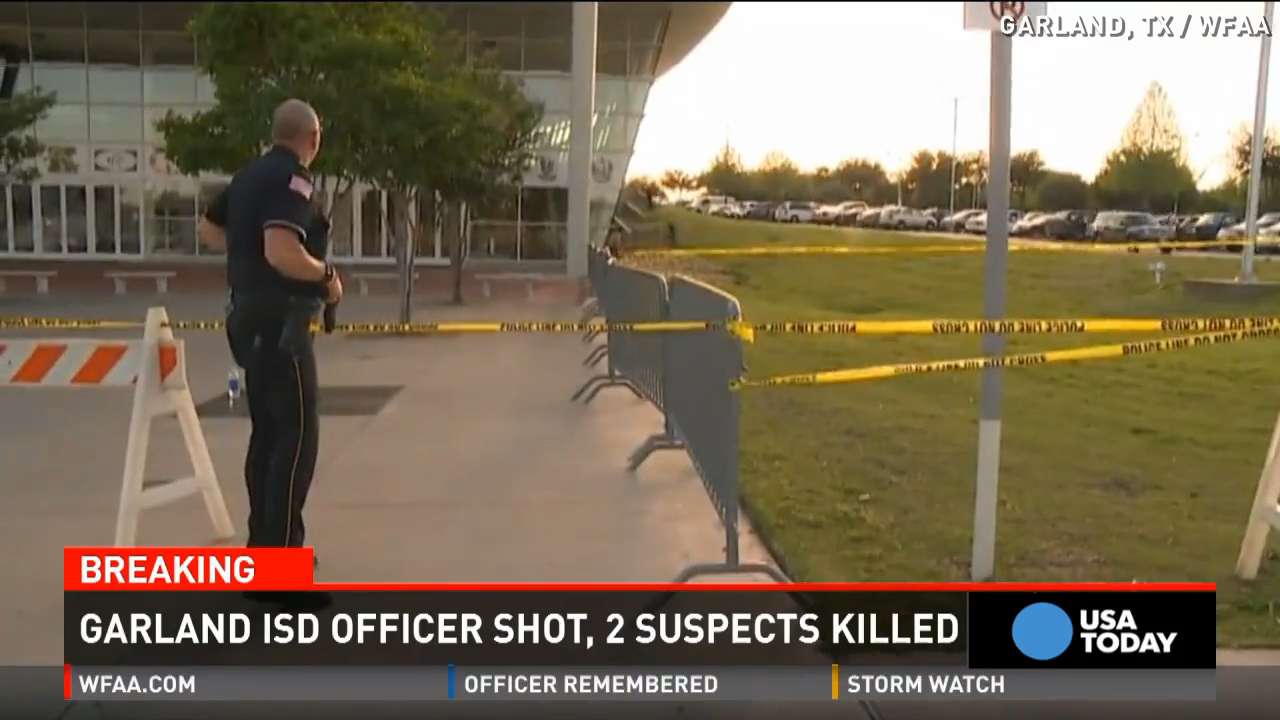 We were all shocked and alarmed with the news of the frightening attack by armed men at the Curtis Culwell Center, in Garland, Texas, earlier this week.

One guest at the event was Geert Wilders, a member of Holland’s parliament with a reputation for openly criticizing the Islamic religion’s more extreme manifestations.

The gunmen, Elton Simpson, aged 30, and Nadir Soofi, aged 34, were both miraculously prevented from causing any harm when they were killed by a police officer.

Tragedy was averted, but the whole incident brings very uncomfortably into focus the dangers posed to a free and democratic society by fanatical murderers eager to kill those they deem to have insulted their faith.

The real question is why there are any Muslims who feel they are entitled to murder people who insult the prophet Mohammed, seeing as the Koran designates God as the only arbiter of punishment against blasphemers.

The answer is that a collection of Mohammed’s statements, known as the Hadith, records him as saying: “kill the person who abuses the Prophet and whip the one who abuses his companions.”

It is undoubtedly true that Mohammed was the target of crude denigration at the event in Garland. Besides for anything else, the program was slated to end with a cash prize award for former Muslim, artist Bosch Fawstin, in recognition of six drawings of Mohammed he had created entitled “You can’t draw me – that’s why I draw you.”

That being the case, is it not somewhat understandable that faithful Muslims were offended, and that some of them were moved to follow the Hadith?

Another thing to consider is this: our own Torah condemns blasphemers to death, while Christians are equally concerned by this offense. And even if one argues that ‘no one is killed for blasphemy these days by Christians or Jews – that’s true, but either it is a capital crime, or it isn’t. If it is, should one not at least have some sympathy for those of faith who truly stand up for this principle?

Indeed, where is our own outrage at the constant offensive statements uttered against the holy and the sacred?

Candidly, that particular question cannot be comfortably answered, but nevertheless, I can state without equivocation that no sacrilegious irreverence can possibly excuse the acts of violence we are seeing more frequently with each passing month, committed by vicious, murdering Muslims, against those they consider blasphemers.

That is because whatever your view of blasphemy may be, not one of the so-called blasphemers who has been targeted by Muslims – whether the editorial staff at Charlie Hebdo, or minority Christians in Syria who refuse to renounce their faith for Islam, or all the many others – are actually blasphemers.

The proof for this is in the Torah portion of Emor – ironically in the story of a man who was sentenced to death for blasphemy. The Torah records the episode involving an unnamed man, curiously identified as the son of Jewish mother and an Egyptian father, who – seemingly unprovoked – publicly and flagrantly desecrated God’s name.

Following a deliberation between God and Moses, the man was executed.

The Talmudic sages were very puzzled by this story. It appears to have nothing whatsoever to do with anything in that particular chapter, and, in any event, the sin of blasphemy is identified elsewhere as a capital crime, so what is the point of the narrative?

One answer given by the Midrash seems to address our exact question. Immediately preceding this story God instructs the priests to bake and display something known as לֶחֶם הַפָּנִים – ‘presentation bread’ – twelve loaves that were baked according to a special recipe and placed in the temple sanctuary each week, for a full week, after which they were eaten by the priests.

The Midrash tells us that the blasphemer was a zealous and faithful man, who, upon seeing the priests serving God with week-old bread, went on the warpath against Moshe and the priests. The altercation deteriorated, and ended up with him blaspheming against God, for whose honor he had originally been protesting.

This ingenious Midrashic interpretation sheds light on the sin of blasphemy in a way that no codified law ever could. Blasphemy can only ever be a sin if it is committed by a true believer. Only someone who believes in God with all his heart and soul can be considered a traitor to that belief system when he offends it.

The unnamed man in this weeks Torah portion was a man whose convictions were unimpeachable. But when he reacted to what he believed to be sacrilege, he flipped and became the very thing he had originally protested against.

I believe that all of us have got this whole Muslim extremist vs. blasphemers thing completely wrong. Geert Wilders is not a blasphemer. How could he be? He certainly doesn’t believe Mohammed was a prophet, and, for all we know, he may even be an atheist. Yes, of course he is guilty of rank insensitivity – but blasphemy? Absolutely not!

Similarly, the murdered editorial staff at Charlie Hebdo. If anyone is guilty of blasphemy, it is the homicidal Islamists who do believe in God, and yet abandon His word by killing people, adopting the warped view that by doing so they are defending Him. That is the worst kind of blasphemy possible.

But at the very least we can be satisfied that these particular desecrators of God will be targeted and rooted out wherever they are, so that God’s name will not be sullied by any association with such rank evil.