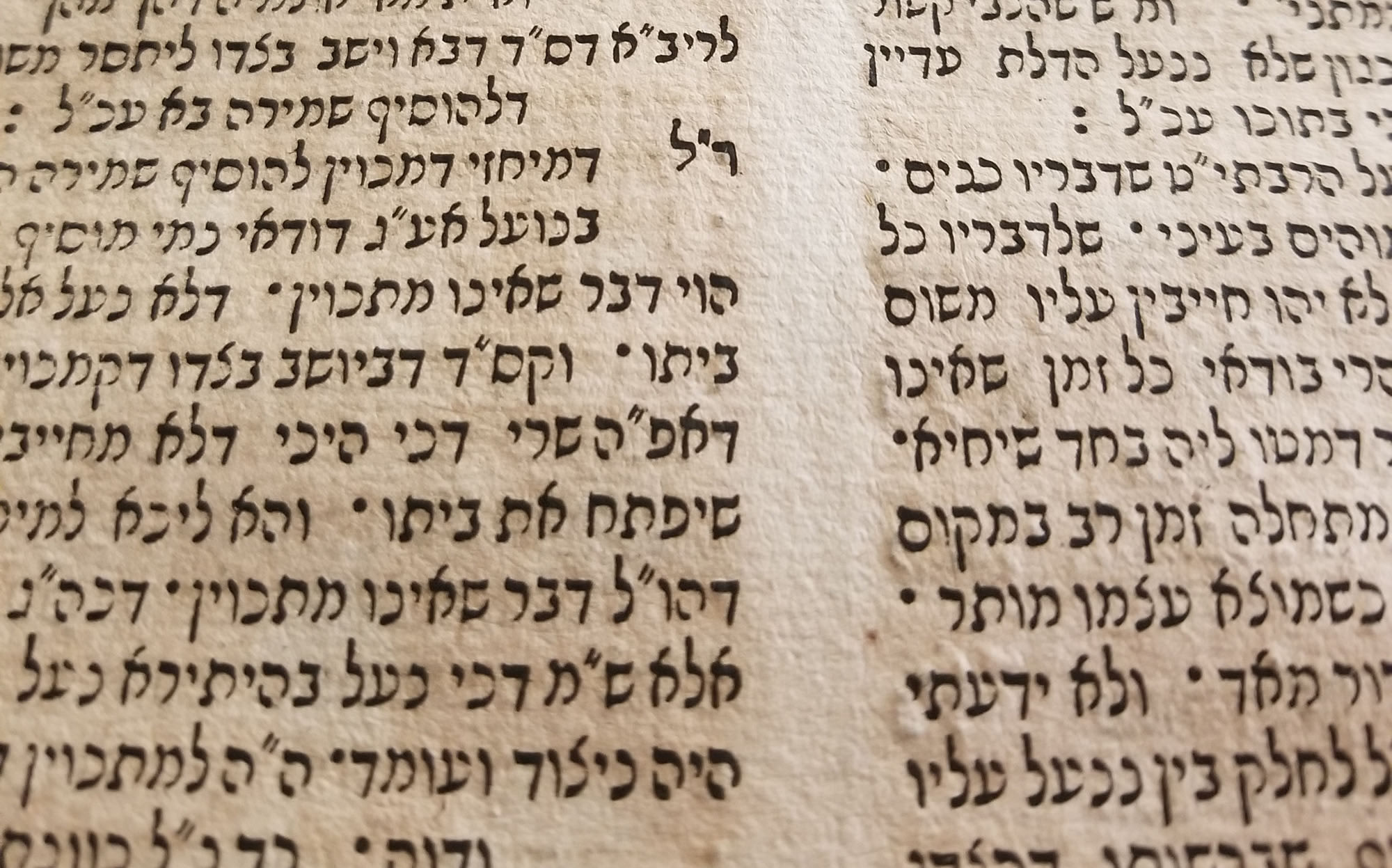 It is always assumed that the most important text of Judaism is the Torah, by which one means the Five Books of Moses, received during the forty years of wandering until Moses’ death.

But while it is true that the Torah is uniquely revered as the essence of our faith identity, elevated above all other texts as the unadulterated word of God, the primary text of Judaism is undoubtedly the Talmud.

The Talmud is a remarkable compilation of ancient traditions that accompanied the Sinaitic Torah, collectively known as Torah-sheba’al-peh, or the “Oral Torah”.

These traditions are made up of two distinct parts. The first consists of guidelines associated with laws mentioned in the Torah whose practice is undefined by the text (such as the shape and color of phylacteries, or the fact that the Omer-offering countdown begins on the second day of Passover rather than the following Sunday).

The second consists of a series of interpretative rules used to extract information from the often impenetrable text of the Torah. The incredible consequence of this dual system is that it turned what would inevitably have become an irrelevant fossil, into a living, breathing document, with layer upon layer of depth and meaning.

It would appear that immediately following the conquest of Canaan, and all the way through the destruction of the First Temple and into the Second Temple period, these traditions remained exclusively oral, in the belief that the Oral Torah’s dynamism would be fatally compromised if any of it was written down.

This purist approach proved to be a disaster, however, and throughout this period Jews and Judaism were in constant danger of vanishing completely. The powerful tug of pagan worship, combined with limited Torah knowledge among the people, often resulted in the abandonment of normative Judaism.

When the pendulum eventually swung back in favor of Torah law, as it always did, the nation would be hampered by its inability to correctly interpret the Sinaitic Torah.

During the rebellious reign of King Josiah (c.649-609 BCE), the High Priest Hilkiah discovered a Torah scroll while renovating the Temple, and brought it to the king’s attention. Josiah was confounded by what he read in the scroll, and sent it to Huldah the prophetess to inquire what it meant. The reason Josiah consulted Huldah instead of Jeremiah, the senior prophet of his day, was probably because Huldah was the leading Oral Torah teacher of her time, as indicated by an ancient Aramaic translation of 2 Kings (22:14).

This explains why the scroll’s discovery and Josiah’s interaction with Huldah resulted in an extraordinary religious renaissance. Nevertheless, the revival was depressingly short-lived, as only a handful of experts were familiar with oral tradition, and the nation once again drifted away from Torah observance.

At some point in the Second Temple era it must have dawned on the rabbis that the dual system would never truly work unless the oral traditions were properly recorded. As a result of this epiphany, the slow process of turning the rich oral backdrop into a structured body of knowledge began.

The final version of the Talmud did not appear until many centuries later, but when it did, it contained a faithful record of discussions and statements by rabbis whose principle aim over hundreds of years had evidently been to formulate a body of knowledge that would both deliver the detailed information lacking in the Sinaitic Torah, while at the same time generate continued enthusiastic discussion and innovation, based on the hallowed interpretative methods dating back to the dawn of Jewish history.

Even as this extraordinary project gathered pace, there were those who opposed it, either because they rejected the concept of an oral tradition altogether, or because they feared that formalizing such a vast body of law would restrict their ability to integrate into contemporary culture.

These Jews became known as the Sadducees, and were comprised of a broad group, encompassing everything from Torah-scripture literalists to Hellenized Jews, who were more interested in blending in with the Greeks, and later the Romans, than in ensuring the survival of Judaism.

But while the Sadducees desperately tried to delegitimize Oral Torah as an aberration, they had nothing enduring to offer in exchange. Instead, they focused on the Temple as the only important symbol of Jewish identity.

With the Temple’s destruction in 70 AD, the Sadducees immediately became an anachronism, and disappeared off the scene in a very short time. The same fate might have befallen the originators of the Talmud – or Pharisees, as they were known – had they not created their comprehensive record of the Oral Torah.

Every Jew since that time owes their existence as a Jew, not to the Sinaitic Torah, despite its superior sanctity and sacredness, but to the extraordinary body of knowledge that is the Talmud. Which is why traditional Judaism focuses so heavily on the study of Talmud, as opposed to simply reading the text of the Torah.

The Torah itself is fully aware that it must be seen as being greater than the sum of its parts, as indicated by the statement (Deut. 11:19):

The three-letter root for the Hebrew word “teach” – L.M.D. – is identical to the root of the Hebrew word for “study”, while the word “Otam” in the phrase, which refers to the children, seems superfluous, and appears without the letter “vav”, meaning it can also be read “Atem” (“you”).

The message the Torah wishes to convey is that we must never limit our own Torah-study to that which we teach our children. To ensure the survival of Judaism, we must be prepared to grow our own personal Torah knowledge throughout our lives.

If Torah had been confined to the original written text, it would never have survived. But there is so much more to the Torah than meets the eye. To access the vast reservoirs of knowledge that lie beyond the text, we must use the Oral Torah as our guide.

And that is why the Talmud is the most important text of Judaism.