IT’S NOT THAT COMPLICATED 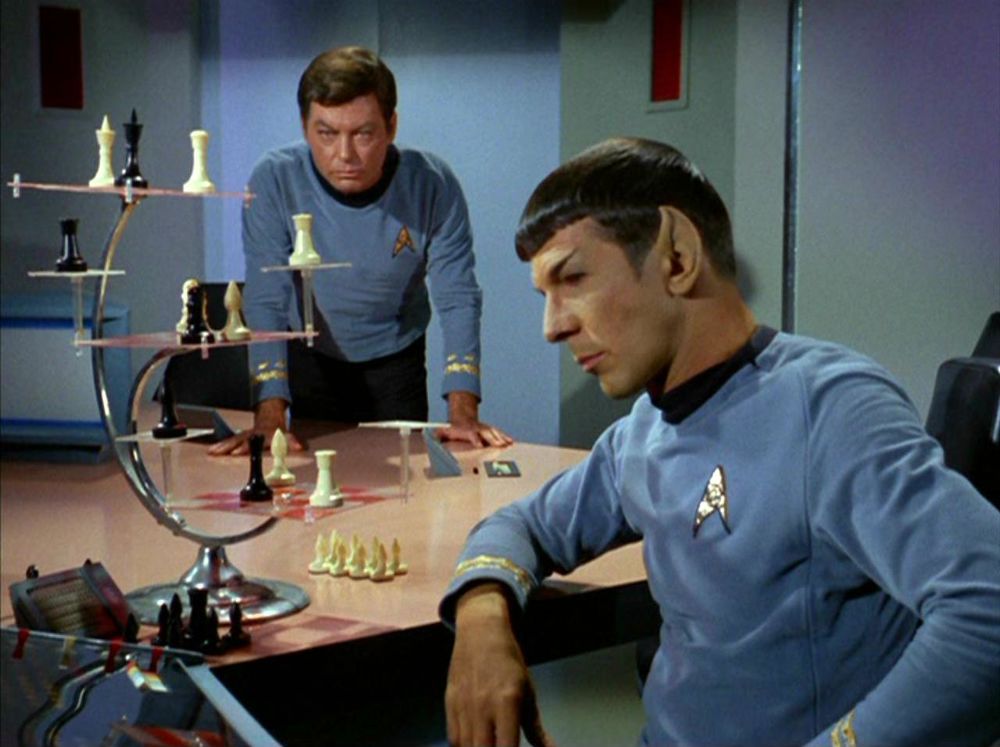 Everything around us is full of complexity. Getting the balance right is complicated. We need to keep our eyes on so many balls. Everything is in motion.

I remember watching the TV show Star Trek as a kid, and although I was never an obsessive “Trekkie”, there was one thing that fascinated me that was never adequately explained. I’m talking about three-dimensional chess. It seemed so much more exciting than plain-old two-dimensional chess. Multiple boards on multiple levels, with pieces moving from one board to another – it was really compelling.

Until recently I was sure that 3D chess was an invention of the Star Trek scriptwriters, but after some recent downtime Google research, I discovered that it predates Star Trek by many decades. Believe it or not, 3D chess is a real game, invented in 1907 by a German occultist – Dr. Ferdinand Maack (1861-1930). In fact, there are no less than 50 variations of the game.

As I read through the complex rules of 3D chess, with the multiple boards and multiple variations, it struck me that life is much more like 3D chess than it is like the 2D version. Don’t we all operate on multiple platforms? Family. Community. Country. Relationships with family. With friends. With work colleagues. The economy. The environment. God. Nature. Science. Income. Expenses. Emotions. Logic. Risk. Ethics. Time. Health. Weather. Distance. Intelligence. Politics.

It’s a really long list, and there’s so much that goes into the mix and that we feed into every decision we make, or that affects everything that happens to us.

Sometimes, when we reflect on Rosh Hashana and Yom Kippur, it all seems so simple. Maimonides writes in Hilchot Teshuva (Laws of Repentance) that life is made up of binary options – good vs. evil, life vs. death – and on Rosh Hashana and Yom Kippur we face God and examine ourselves on that basis. We hear the primitive sound of the shofar blasts. We talk about God as a father, as a king, as a shepherd. There’s no complex theology in the liturgy, and very little by way of sophistication.

Why waste High Holidays on this kind of two-dimensional simplicity? Why don’t we use these special days as an opportunity to explore the meaning of an omnipotent creator God? Surely that would be more useful and more meaningful.

I have always felt that this problem affects the way we relate to Rosh Hashana and Yom Kippur. How can we possibly treat our lives as if they are a game of 2D chess, when in reality our lives are much more like 3D chess? Wouldn’t it be so much better if Rosh Hashana and Yom Kippur were more 3D? Wouldn’t it be better if they somehow reflected all the grey area in between black and white?

Those who study Talmud for the first time are often surprised by the very extreme ideas or scenarios suggested by the Talmud in an attempt to establish Jewish law. One famous piece in Tractate Pesachim (10b) involves a long discussion about a house that has been cleared of chametz before Passover.

The discussion continues, and the mouse scenarios become ever more obscure and unlikely.

Clearly, the point of these questions is not mouse anthropology, nor is it vermin control – rather the Gemara wishes to convey the extent to which we must take precautions to protect our homes from chametz on Passover. The real lesson of the Gemara is this – don’t get distracted by the improbability of the situation; look for the underlying message.

We always need to be thinking – what is the subtext of the discussion? Because that subtext may be more important than any legal principle that could be gleaned from thinking through the problem to its most extreme destination.

I want to share two stories with you, both of which exemplify this idea. And I hope both of them will offer us an insight into the seeming superficiality and oversimplification of the objectives of Rosh Hashana and Yom Kippur.

A few weeks ago a rabbi in Baltimore tragically lost his son to cancer. A young married man, with three children. A friend of mine from New York who is a close friend of the rabbi drove down to Baltimore during the Shiva (week of mourning).

Apparently, there are about a dozen young disillusioned ex-yeshiva students in Baltimore who have formed a group that meets regularly. This group has decided to walk away from Torah-observant Orthodox Judaism. No Shabbat. No festivals. No kosher. No Torah study. No prayer. I am not sure why this has happened, but in Baltimore the group is well known.

Quite a few members of this group grew up and went to school with the young man who died. Unlike them, their friend was a rock of faith. He died in August. In June he wrote a public letter that was published online in which he asked for help from anyone who knew him. Not money. Not a huge life-changing commitment. He simply asked if people could turn off their cellphones before going into synagogue to pray, so that they could pray better, and as a result of that undistracted prayer he would merit a recovery. Sadly it was not to be.

While my friend was at the rabbi’s home he overheard a discussion about this group of former yeshiva students. Someone said that he had heard the group was so shocked by the death of their friend, they had decided to fully observe one Shabbat, and to put Tefillin (phylacteries) on and pray properly on one weekday, to honor his memory.

It’s not unusual at a Shiva for a discussion to descend into banalities, and this one was no exception. Was this memorial commitment a good thing, or was it pointless? Should they be praised, criticized, or ignored?

Suddenly one guy blurted out – “what’s the point of keeping one Shabbat if they didn’t observe it the week before, and next week they won’t do it either? It’s as if they are mocking Judaism! How does that honor the memory of the person who died?”

The room went quiet, and everyone looked at the father of the young man who had been sitting there, so far without saying a word. He was quiet for a moment. Then he said: “How can you say one Shabbat is pointless? What wouldn’t I do to spend just one more Shabbat with my son?”

Boom! You see, for the person who lost his son there was no complexity. His yardstick was very different to everyone else’s. He wasn’t hearing a discussion about the relative merits of former yeshiva students observing one Shabbat. This discussion was not about a mouse with chametz. He had crystal clarity. Every day is precious. Every positive experience is priceless.

The Talmud says (Shabbat 153a) one should treat each day as it if it is our last. But in the real world, who does that? Except for our last day, every other day is not our last! So when we are confronted by a Rosh Hashana or a Yom Kippur, it seems overstated. Didn’t we do exactly the same last year? And the year before? And the year before that?

Moreover – and this is the point the guy at the shiva was trying to make – why keep one Shabbat if you are never going to keep Shabbat again? Why bother with anything Jewish, if you don’t buy into everything?

So I want to add one more story that I heard last week. It takes this idea one step further. It’s a painful story with a painful lesson.

There is this fellow who owns a jewelry store in Israel. A few weeks ago a little girl – may 8 or 9 years old – walked into the store and said to him, “I am here to buy a bracelet.”

She looked through the glass cases and pointed to a bracelet that was priced at $3,000. The shop owner was surprised. “You really want to buy that bracelet?”

“Wow, you have very good taste. Who do you want to buy it for?”

“For my older sister.”

“Oh that is so nice!” the storekeeper replied, “Why do you want to buy your older sister this bracelet?”

“Because I don’t have a mother or father,” the little girl said, “they both died, and my older sister takes care of us – me and my siblings. So we want to buy her a gift, and I have the money to pay for it.”

She took a bag of coins out of her pocket and poured them out onto the counter. The storeowner counted them up; the total was just under eight shekels, which is a little less than two dollars.

The shop owner looked at the coins and then at the girl.

“Wow!” he said, “That’s exactly what the bracelet costs!”

He finished wrapping the bracelet, wiped away his tears, and handed the little girl the bracelet.

A few hours later the girl’s older sister came into the the store holding the bracelet in her hand.

“I’m terribly embarrassed,” she said. “My sister should not have come here. She shouldn’t have taken this bracelet without paying.”

“What are you talking about?” the store owner asked.

“Are you kidding? This bracelet costs hundreds or maybe thousands of dollars. My little sister doesn’t have that kind of money – she doesn’t even have ten dollars! Obviously she didn’t pay for it.”

“You couldn’t be more wrong,” the storekeeper replied. “She paid me in full. She paid with seven shekels, eighty agurot, and a broken heart.”

“I want to tell you something,” continued the man. “I am a widower. I lost my wife a number of years ago. People come into my store every single day. They come in and buy expensive jewelry, and all these people can afford it. When your sister walked in, with her 7 shekels and 80 agurot, for the first time since my wife died, I felt what love really means.”

During the High Holy Days, we come to the Almighty and we want to buy something very expensive. We want to buy life. The best life possible. It’s the most expensive bracelet in the jewelry store. But we cannot afford it. We don’t have enough money to pay for it. We don’t have the merits. We’ve been saving up all year, but all we have is 7 shekels and 80 agurot.

He sees how much we love Him and how much we yearn to improve, and He says, “You know what? You have touched my heart. Here’s what you want, you have paid in full.”

When we think of Yamim Noraim (High Holidays) as unsophisticated, it is because we overrate ourselves as well-heeled sophisticates. But how does what we need out of life compare with what we have to offer God. It’s not an equal playing field.

All of us are little kids walking into the jewelry store picking out the most expensive bracelet. We are the op-ed armchair critics discussing the relative merits of keeping just one Shabbat.

Rosh Hashana is so real exactly because it is so simple. The underlying message is that life is not 3D chess, it is simple 2D chess. If we are looking for complexity we are missing the point. In the end it is the simple things that matter. Love. Health. Trying to be a good person. We need Rosh Hashana to get back to basics. Once we are there we can consider some of the complexities.

Reb Nachman of Breslov writes that simple faith is the most powerful faith of all. All the philosophy and theology in the world will never result in simple faith. Only simple things can do that.