IT’S NOT ALL ABOUT YOU 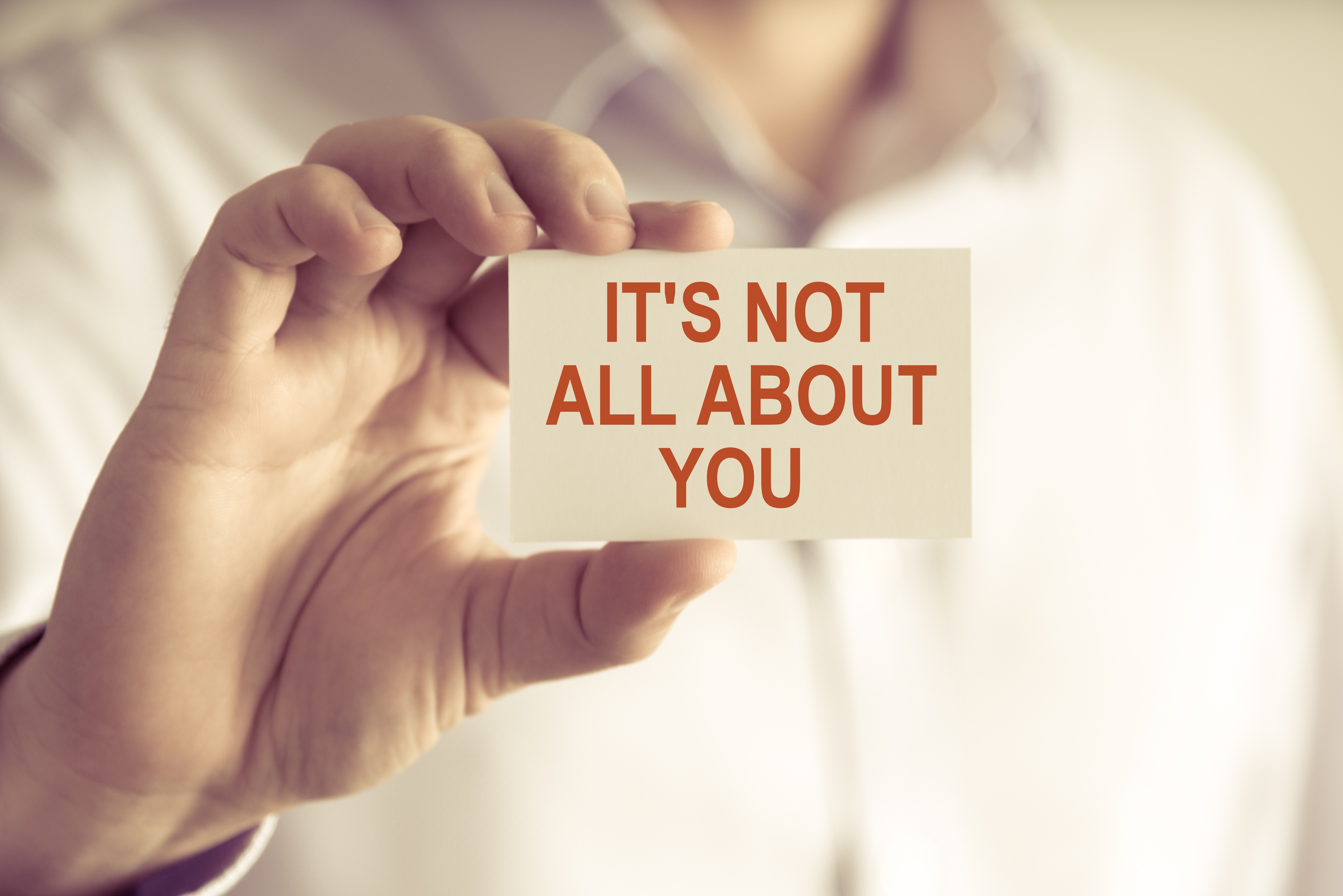 There are very few groups of people about whom you can tell jokes these days. I recently discovered a category that everyone seems ok with: Narcissists.

How many narcissists does it take to change a light bulb? One. He holds the bulb while the world revolves around him.

Or this one, that I heard from a woman who came to see me a few ago. She told me she was divorced. I asked her why? She told me she divorced her husband for religious reasons. He thought he was God and she didn’t.

Here’s a story. About fifteen years ago this guy comes to see me, he wanted me to help him find a wife. He was in his late 30s – you know what it’s like, thirty-nine is the longest year. We sat in my office, and he takes out a notepad, and begins reading me a list of all the things he needed his prospective wife to be.

“She needs to be tall, beautiful, college educated, a good job, but not too independent, from a nice family but not too involved with them”

The list went on and on, and I sat there looking at this guy, listening to him rattle off the checklist.

Eventually, he was done. I was quiet. He said to me, “what do you think?”

“What do I think? I think it’s a very impressive list, and I think any woman with all those attributes and qualities would be a fantastic wife. But I have one question, and don’t take this the wrong way. This girl you are describing is presumably out there somewhere, and I am pretty sure she also has a list of all the things she wants her husband to be. What do you think is on her list, and are you confident that you match up to all the things on that list?”

He stuttered something, but it became evident that he had never even thought about that. It had never been about her, or about what she wanted, because it was always all about him.

In the Haftorah on Rosh Hashana we read the story of Hannah, the barren wife of Elkanah, and how she prayed for a child. As a result of her prayer that child was born and he would become the prophet Samuel, one of Jewish history’s most influential leaders, who changed the course of history, when he plucked a young unknown man called David from obscurity, made him king, and through him founded the Jewish Royal family, the House of David.

Rabbi Chaim of Volozhin, commenting on this Haftorah, points out that the verse describing Hannah’s prayer does not use the expression we would expect “vatispallel EL Hashem,” and she prayed to God. Instead the verse says “vatispallel AL Hashem,” which translates as she prayed over God or on God (Shmuel I 1:10). Why the strange phrasing?

Rabbi Chaim of Volozhin answers that the minor word change is there to teach us something incredibly important. Hannah’s prayer is the scriptural source for the Amidah, the most important of all our prayers, said every day three times a day. It is a prayer that contains eighteen separate prayers, each framed as a blessing, twelve (thirteen) of which are requests for things that we need in our lives – knowledge, health, success, good leaders, a good system of justice, and other important requirements.

But how exactly are we meant to pray? We are asking God for stuff. It seems like we have a long list of things we need – “I need this! I need that!” And we know that this is not the way we should be praying. The Zohar says that anyone who comes to God with a list of requests is just like a dog barking at its master – “Give! Give! Give!”

And even though on Rosh Hashana we don’t submit any overt requests, we know that one of the functions of the shofar is that each note of the shofar is a means of request, a hint, as it were, of the things we need. In fact, the twelve shofar blasts – Tekiya-Shevarim-Teruah-Tekiya; Tekiya-Shevarim-Tekiya; Tekiya-Teruah-Tekiya – correspond to the twelve middle blessings of the daily amidah. How is that appropriate?

Moreover, how could Hannah devote an entire prayer pleading for a son? Isn’t that just very selfish? How can any of us base our prayers on such a faulty foundation? How can we devote so much of the amidah to making requests?

Hannah knew that the world needed a special person like her son Samuel, who could lead the nation, be a spiritual inspiration, shape their future. She knew that this was what God wanted. His people, the Jewish people were floundering – they needed Samuel. So she prayed to God to give her the child that would benefit God, and in fact she later went and gave up her child so that he could be incubated by Eli Hacohen to become the great leader he was meant to be.

Had Shmuel haNavi never been born, the Godliness he brought to the world would have been absent. So Hannah prayed “AL Hashem”, not “EL Hashem”, she didn’t come to God with a narcissistic request, she came to Him wanting to fulfill God’s purpose through her.

We have the custom on Rosh Hashana night to eat a whole bunch of symbolic foods with accompanying prayers. Apple dipped in honey – we should have a sweet year; a fish head – we should be leaders, not followers; a pomegranate – we should be plentiful, like the seeds of a pomegranate; and other similar items and themes.

Everyone thinks that the reason we eat these symbolic foods is because it is not enough to just ask for the laundry list of things that we want, but we have to go a step further and translate those requests into symbolic actions to make them more real, to give them more weight.

The truth is exactly the opposite.  A symbol is just a hint. Our main concern on Rosh Hashana has to be purely that the world should be filled with the glory of God.  But, while we are in the zone, as an aside, we sneak in a little hint about some of our own personal needs and wants as well. Not openly, but with some symbolic foods and the use of puns. Symbols and hints, because this is all secondary to our real focus, namely God’s glory. We are just saying, without saying it, that in order to make sure that our primary directive is fulfilled, we will need some help with other stuff to make it happen.

“The woman went on her way, she ate, and she wasn’t sad anymore…”

First of all, this is a great verse for all those who think that the best way to treat depression is to feed people. “Aww, you’re sad? Come let me give you some lokshen kugel and brisket with fried onions. You’ll feel much better.” Who needs anti-depressants if you’ve got the recipe for latkes?

Actually, that’s not what the pasuk means. Hannah prayed, and she felt much better. So much better that she started eating again, and cheered up. She went back to being her old self. In reality, though, what had changed for her? Nothing! She had no guarantee that her prayers would be answered, or that her dire situation would improve. Why did she cheer up?

The answer is this (see: Hatam Sofer, Derashot): It was not that Hannah was confident that her prayers would be answered. We know feeling that way is foolish hubris — there are no guarantees, no matter how hard you pray. What changed was that now that she had prayed properly, and she knew she had done it properly, for all the right reasons, she was willing to accept her situation even if it did not turn out exactly as she hoped it would.

We have to do what we have to do, to pray that we are given the chance to fulfill God’s mission for us, but once that effort is done, a person has to accept whatever it is that God chooses to do. Our duty on Rosh Hashana is not to close the circle. We need to do our piece, make sure it’s not just about ourselves, but about God. Hopefully He will give us all the help we need to fulfill that mission. And when you’re done, you should go and eat, and be happy, and whatever happens will happen.

May we all have a year full of blessings, nachat, joy, success, health, meaning, and fulfillment. And next year may we celebrate Rosh Hashana in Jerusalem with our temple rebuilt.