IT’S NOT ALL ABOUT ME 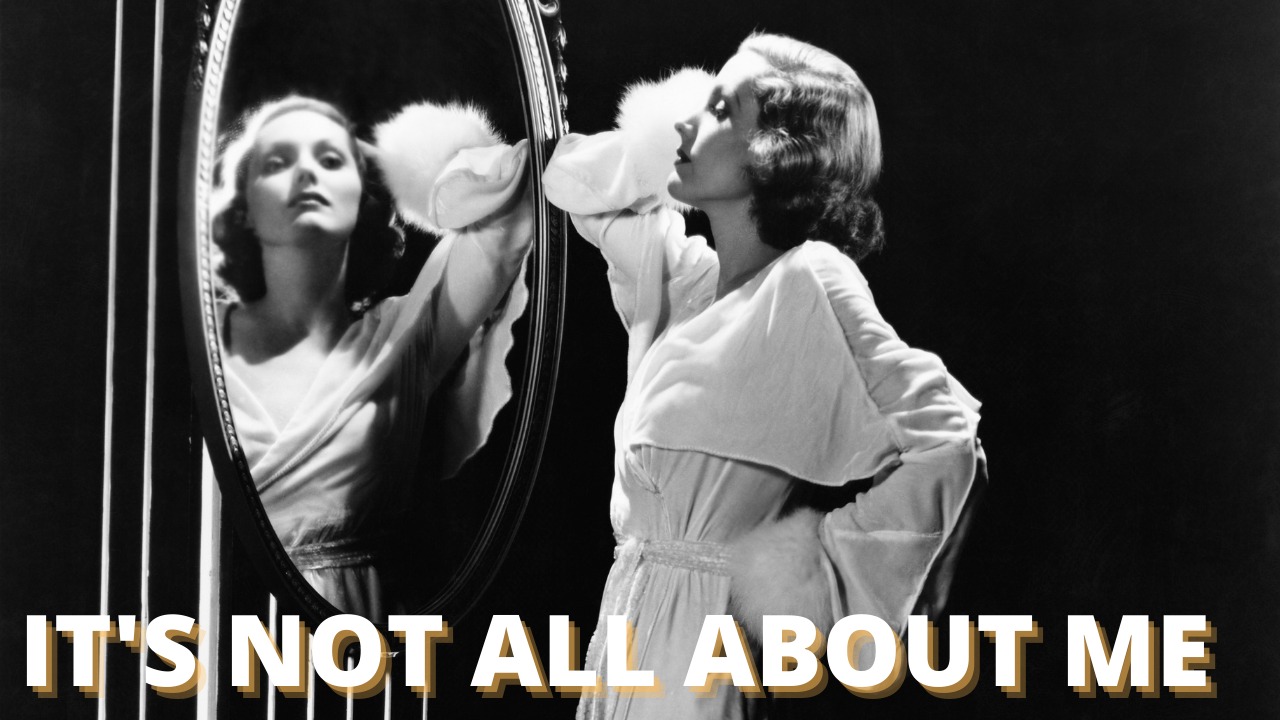 There’s a famous quote from the 1988 movie, Beaches; it’s one of my favorite movie quotes of all time. It’s Bette Midler who says it – without a hint of irony – in her starring role as the self-centered singer “C.C.” Bloom: “But enough about me, let’s talk about you…what do YOU think of me?”

The truth is, it’s not an original line – a variation first appeared in The Evening Tribune in 1928, and the line has been reused countless times since – but Midler is the one who made it famous. The reason I like it so much is that this pithy aphorism perfectly captures the way a narcissist sees the world: everyone and everything in their orbit is simply supporting actors in an ongoing story of their superlative importance.

Or, as that old joke put it so well: How many narcissists does it take to change a lightbulb. Just one. All he has to do is to hold it in place while the world revolves around him.

Recent research has revealed that narcissistic personality disorder (NPD) not only impacts your ability to think straight, but it also affects your memory. According to an article in the Daily Mail this week, a scientific study tested 1,435 participants for ‘grandiose narcissism’ – a “personality trait which involves pronounced self-focus, egotism, vanity, a sense of entitlement and a tendency to disregard the needs of others” – and then conducted a number of experiments to see how grandiose narcissism affects mental acuity.

In one experiment, all the participants were shown photos of 40 men and then told to complete some unrelated tasks, after which they were shown the photos again along with another 40 photos. As they were shown each photo each participant was asked if they had seen the face before. Predictably, the narcissists were unable to recall as many faces as those on the study unafflicted by self-obsession.

But while these findings are hardly surprising, it is the hypnotic effect of narcissists that is perhaps the most alarming aspect of this dreadful blight – one person’s narcissism can lead to a contagion of mental dysfunction among those who fall under their spell, with devastating consequences.

In their 1983 book Hitler’s Psychopathology, authors Norbert Bromberg (d.1988), a psychologist, and Verna Volz Small (1916-2008), offered a compelling psychobiography of Adolf Hitler which suggested that all his actions were underpinned by acute NPD. Hitler’s absurd self-belief amounted to an overriding obsession that drew in ever-widening concentric circles of German society, in the end resulting in death and destruction on an unprecedented scale.

And it is this phenomenon of group hero-worship of a chronic narcissist that can help explain one of the puzzles at the heart of Parshat Miketz. Why did Pharaoh need Joseph to figure out the meaning of his dreams? Why were his own advisors – all of them expert dream interpreters – unable to figure out the symbolism of Pharoah’s dreams for themselves? After all, Joseph’s interpretation seems rather obvious – even to us non-experts.

The Midrash notes that in ancient Egypt, all the gods were subservient to the reigning Pharoah. This was the paradigm propagated by the elite and it was blindly accepted by the populace. But while this may have worked in terms of keeping society in check, with everyone bowing to the supreme leadership of one narcissistic individual, the downside of this approach was that they were unable to yield to reality when it differed from their worldview.

Pharoah’s advisors had clearly drunk the Kool-Aid, and were utterly convinced of the fact that anything which was important to Egypt’s destiny had to revolve around Pharaoh. Pharaoh felt the same way. As far as he was concerned, it was always “all about me”.

And it was this handicap that hindered the outlook of Pharaoh’s coterie of counselors as they attempted to interpret his dreams. Unsurprisingly, he had to be at the center of every interpretation: one advisor told him he would have seven daughters who would all die; another advisor proposed that Pharaoh would conquer seven countries that would later rebel against him. But none of the advisors thought to suggest that the central character of the dream was not in fact Pharaoh, the individual, but rather it was Egypt, the country.

Joseph was released from prison and Pharoah told him his dreams, but in his repetition of the dreams he was no longer עֹמֵד עַל הַיְאֹר (Gen. 41:1) – standing over the River Nile, the all-powerful body of water symbolic of all the gods considered subservient to him. Instead, he was now עֹמֵד עַל שְׂפַת הַיְאֹר (Gen. 41:17) – standing next to the river.

It was a subtle change, but it marked a remarkable moment of clarity for someone whose entire existence was contingent on collective psychosis – a psychosis presumably projected by him, and which had seen his subjects buying into the ridiculous narrative of his omnipotent superiority.

Joseph was sharp, and immediately leaped onto Pharaoh’s acknowledgment of his vulnerability, telling him that God wished him to know via the dreams that everyone was going to be affected, not just Pharaoh. It wasn’t “all about me.”

Joseph presents us with the perfect example of humility in a person of greatness. His challenging experiences didn’t cause him to retreat into self-obsession; instead they gave him a clarity of vision which enabled him to see things as they were, without his own ego ever getting in the way. This was why he was able to care so much about others – even those who had harmed him – and to care for them to such an extent. And this was why Joseph saved a country and strengthened an empire, while he simultaneously set his family on the path towards nationhood and a spiritual legacy that has been maintained to this day. Simply put: for Joseph, it was never “all about me.”