INSANITY IS NO EXCUSE 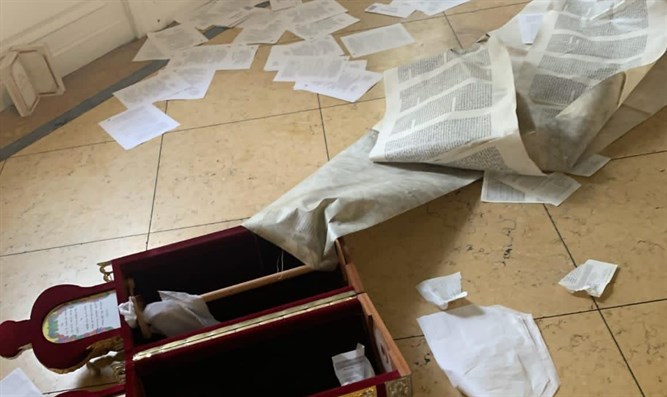 A couple of weeks ago, during the early hours of Saturday morning, Anton Redding, a 24-year-old man from Pennsylvania, allegedly rampaged through Nessah Synagogue in Beverly Hills, just a few blocks away from our own synagogue, and home to a flourishing Persian Jewish community, some of whose members are also members of our shul.

Redding, who has been variously described as being from Millersville, Mohnton, and Lancaster – all suburban towns south-east of Harrisburg PA – was arrested in Kona just a few days later and arraigned in court, where he entered a plea of not guilty, and is now in jail until his next court hearing on January 30.

Almost immediately after the incident was discovered that Shabbat morning, our synagogue security team was informed by BHPD. We naturally took all the necessary precautions, as at that stage he was still on the loose and no one could be sure of his next move.

But news soon filtered through that this outrage was the act of a “crazy guy” who was not necessarily an antisemite, and although he had undeniably trashed furniture as well as desecrated Torah scrolls and prayer books at Nessah, there seemed to have been no premeditation, and he had also left certain unmistakable Jewish icons, such as Israel’s flag, completely undisturbed. Additionally, he had not spray-painted swastikas or profanities, the staple indicator of antisemitic vandalism acts in synagogue and Jewish cemetery attacks.

The senior rabbi of Nessah, Rabbi David Shofet, has since gone on the record to say that “although this vandalism and crime … may prove to be the act of a lone man of disturbed mind, we should all be vigilant, united, and responsive to the rise of antisemitism in our country.”

His statement projects the idea that somehow we might think the behavior of a solitary madman is not connected to the issue of rising antisemitism in the United States, and we need to be warned not to sigh with relief if Anton Redding proves to be suffering from a mental illness that resulted in his nocturnal act of sabotage at one of our local synagogues.

Truthfully, and with respect, Rabbi Shofet is only half-right, and besides, the issue is too important to leave it at that. Because Rabbi Shofet did inadvertently hit upon a very important point – a point that we must all become acutely aware of, take very much to heart, and absorb into the fiber of our beings: namely, that antisemitism, and, indeed, racism or prejudice of any kind, is a mental condition.

In the 2016 book “Are Racists Crazy?”, the authors – historian Sander Gilman and sociologist James Thomas – consider the question of whether a psychological or psychiatric diagnosis is a useful way of dealing with racism or antisemitism, or whether addressing it this way simply shields racists and antisemites from any blame?

Their book is not the first attempt to address this particular issue; it is a debate that has been raging for decades and proven to be highly controversial.

In 1934, the American Jewish Congress organized a public mock trial of Adolf Hitler at Madison Square Garden in New York City. According to the eminent medical professor Lewellys Barker, acting as chief witness for the prosecution, Nazism had to be defined as a “psychic epidemic,” and, as he told the audience of 20,000, “to understand Hitler and Hitlerism, one is compelled to enter the domain of psychopathology.”

Once again, as was noted then and since, the problem with this thesis is that it somehow gets Hitler off the hook, and indeed this argument was quickly dropped once Nazi hostility to Jews turned violent – after all, no one wanted Nazi murderers to be exonerated on the basis of an insanity plea.

Unfortunately, however, the problem did not disappear. In 1981, an elderly white man in Kansas, Anthony Simon, shot his Chinese American neighbor Steffen Wong.

Charged with two counts of aggravated assault while using a deadly weapon, Simon’s defense claimed he suffered from “anxiety neurosis” as he was afraid of “Orientals”, whom he considered to be a deadly threat because of their “expertise in martial arts”.

Even though the court acknowledged that this was a “distortion of reality” – in other words, patent nonsense – Simon was acquitted on both counts, and his case has consequently become a legal precedent used to defend racists claiming mental illness.

But as far as Jewish law is concerned, there is no practical difference if someone commits a violent act because they are suffering from a ‘racism mental condition’ or not. If a person objectively understands that violence is wrong, then they are liable for any violent act they commit, whether or not their target is, in their warped worldview, an undesirable or some kind of perceived but misplaced threat.

And the proof for this can be found in the way rabbinic literature refers to the antihero of Chanukah – Antiochus IV Epiphanes, king of the Seleucid Greeks, and antagonist of the Jews in Judea in the period leading up to the Hasmonean Revolt.

Known as ‘Epiphanes’, which means “God Manifest” in Greek, he was also called Antiochus ‘Epimanes’, Greek for “the Mad”, a wry play on words.

Apparently, he would often disappear from the palace only to be found later reveling with ordinary folk, or in artisanal shops, chatting and discussing art with metalworkers. Courtiers would frantically search for him to no avail, eventually finding him wandering around in disguise or drinking with common people whom he had never previously met.

But all this bonhomie camouflaged an evil sociopath, who thought nothing of murdering and persecuting thousands of Jews simply for practicing their faith.

Rather than giving him a pass because he was Antiochus “the Mad” who could argue that he was not in control of his actions because he suffered from “anxiety neurosis” whenever he saw a Jew, rabbinic literature refers to him simply as אַנְטִיוֹכוּס הָרָשָע – “Antiochus the Wicked”.

If he could function in daily life as an ordinary human being, then he must be judged by his actions, not by some specious psychological evaluation.

So too, if Anton Redding or any other antisemite attack Jews or their property, then notwithstanding the fact that they may be crazy, they are nonetheless responsible for their antisemitism, and will be punished accordingly.

As it turns out, this is one of the intrinsic messages of Chanukah.