I’M HERE FOR AN ARGUMENT 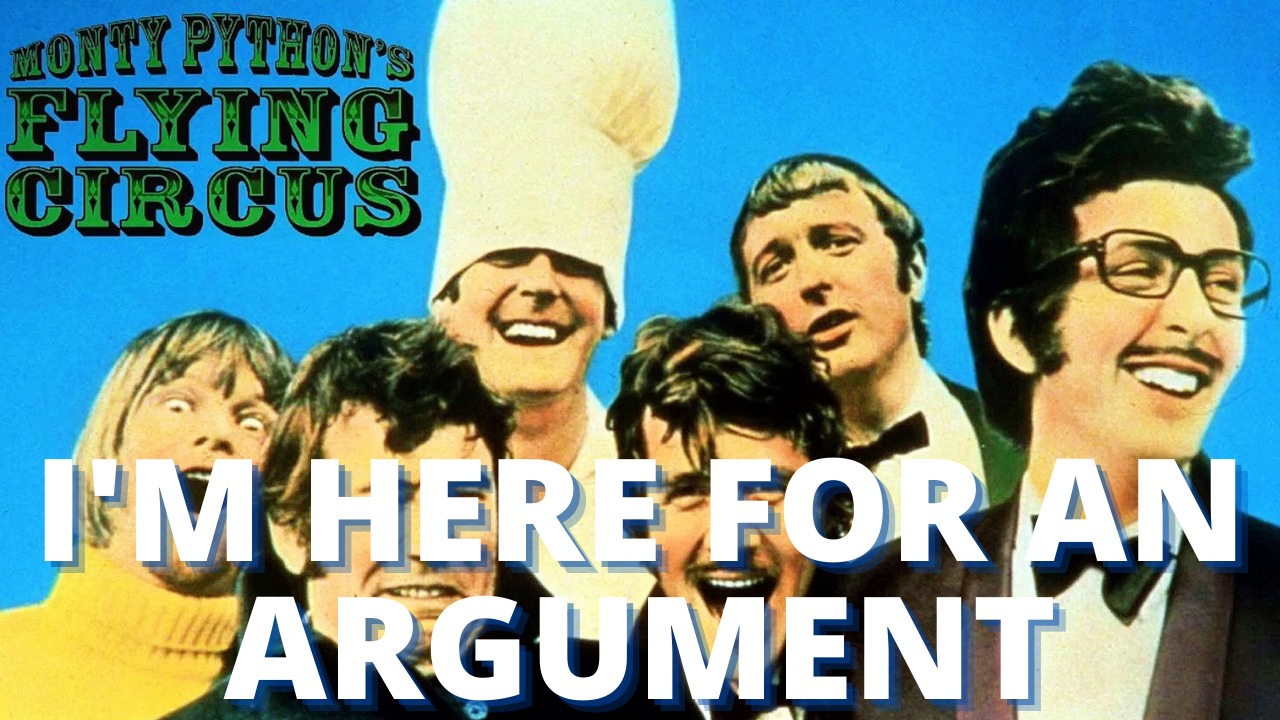 If you’re British and of a certain age, you are probably a fan of the irreverent 70’s comedy sketch show Monty Python’s Flying Circus. I was introduced to their zany humor in my early teens. It had been a few years since the original TV shows aired, and at the time the only medium available to access their sketches was audio recordings.

I found Monty Python’s Flying Circus incredibly refreshing. It was like stepping through the looking-glass into an alternative world, and I was helplessly drawn into the countless unlikely scenarios that were the backdrop to their skits – a roller-coaster mix of surreal setups and clever wordplays. And Monty Python comedy does much more than make you laugh – it forces you to see just how ridiculous the human condition can be, particularly if people take themselves too seriously.

One particularly preposterous Monty Python skit is known as the “argument sketch”. The premise is simple. An average-looking chap enters a generic office and tells the receptionist that he’d “like to have an argument.” Unfazed, the receptionist asks if he’s interested in a one-off argument, or if he’s thinking of taking a course. The penny drops – this is no ordinary office; it is a facility which offers a variety of human interactions that in a non-Monty Python world we all try and avoid: arguments, verbal abuse, listening to complaints, and even being hit over the head.

After some false starts, the guy walks into a room and asks if he’s in “the right room for an argument.” The man looks up at him, quizzically. “I’ve told you once,” he says. “No you haven’t.” “Yes I have.” “When?” “Just now.” “No you didn’t!” “Yes I did!” “You didn’t!” And so it goes on, back and forth, until the customer, in total frustration, challenges his interlocutor: “Look,” he says, “this isn’t an argument!” Predictably, the other guy responds: “Yes it is!” “No it isn’t!” says the customer, “it’s just contradiction – and an argument isn’t just contradiction.” “Well, it can be.” “No, it can’t!” he protests, “an argument is a connected series of statements intended to establish a proposition.”

And so it goes on – and on, and on. Eventually, the sketch descends into total farce, with the comedy meandering off in a different direction – but I was always struck by this particular point: that an argument is only an argument if it is a connected series of statements intended to establish a proposition, rather than just being a series of pointless, futile disagreements.

Writing in the Harvard Business Review, the award-winning executive coach Peter Bregman explained why most arguments are utterly ineffective:

“Think about it. You and someone have an opposing view and you argue. You pretend to listen to what they’re saying but what you’re really doing is thinking about the weakness in their argument so you can disprove it. Or perhaps, if they’ve debunked a previous point, you’re thinking of new counterarguments. Or, maybe, you’ve made it personal: it’s not just their argument that’s the problem – it’s them. And everyone who agrees with them. In some rare cases, you might think their argument has merit. What then? Do you change your mind? Probably not. Instead, you make a mental note that you need to investigate the issue more to uncover the right argument to prove the person wrong.”

Remarkably, Bregman is making the exact same point as Monty Python: an argument – however sophisticated you may think your point-of-view may be – is never going to be productive if it is merely a series of contradictions between two opposing viewpoints. That’s because if the object of an argument is just disagreement, no proposition is ever established – and the longer such an exchange of views persists, the more it will lead to frustration, rancor, and worse.

Puzzlingly, the Talmud is almost exclusively dominated by arguments between rabbis. Paradoxically, it seems as if our Talmudic sages reveled in disagreement. And although Hillel and Shammai disagreed with each other quite infrequently, the schools they founded and inspired remained in constant dispute over major and minor points of Jewish law for centuries.

In fact, over 300 debates are recorded between Beit Hillel and Beit Shammai, and yet, the Talmud informs us (Yebamot 14b): לא נמנעו ב”ש מלישא נשים מבית הלל ולא ב”ה מבית שמאי ללמדך שחיבה וריעות נוהגים זה בזה לקיים מה שנאמר האמת והשלום אהבו – “Beit Shammai did not refrain from marrying women from Beit Hillel, nor did Beit Hillel refrain from marrying women from Beit Shammai, which means that they remained friendly and affable towards each other, fulfilling what [Zechariah] said: “Love truth and peace” (Zech. 8:19).

Not only was there a constructive purpose in their debates – namely, the establishment of Jewish law – when it came down to practical life, there was a total accommodation of each other’s opinions. As the Talmud records elsewhere (Erubin 13b), both points of view were considered the “words of the living God,” an attitude these adversaries seem to have adopted as an overriding principle.

Meanwhile, Korach’s intent was anarchy: he wanted to disrupt the social order, to deconstruct society, and to undermine the leadership. Korach was not interested in an honest debate, nor was he concerned with anyone else’s point of view. As if this was not enough, he knew that there was no endgame in which he could emerge successful. Gainsaying Moses may have been satisfying in the short term, but ultimately, just like the Monty Python sketch, it was an exercise in futility.

Nothing has changed. Human beings still argue. And there are those who argue like Hillel and Shammai, and those who argue like Korach. The difference between the two remains the same, and we all know why one kind of argument is right, and why the other is wrong. And while truth is undoubtedly important, ultimately it is always more important for peace to prevail.