ICONOCLASM IS THE ROAD TO SELF-DESTRUCTION 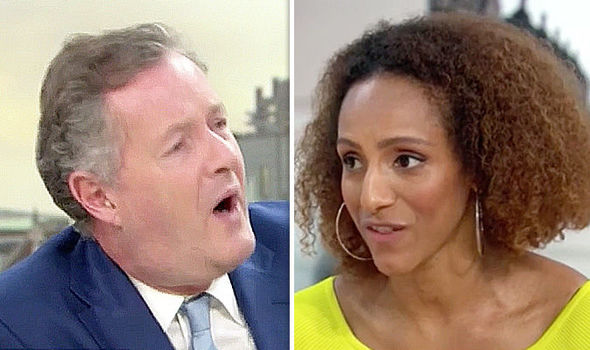 Afua Hirsch is a British lawyer and journalist, born to a Jewish father whose family escaped Nazi Berlin in 1938, and an Ashanti Ghanaian mother.

She is best known as a strident social critic who likes to focus on the imperceptible racism and prejudice that continues to permeate British society – imperceptible, that is, to those who aren’t its victims.

In February Hirsch published her first book, Brit(ish): On Race, Identity and Belonging, which the publisher promoted as a “personal and provocative investigation” into the collective denial that pervades British society in terms of its racist past and present.

Despite the merits of her cause, however, like so many other tabloid polemicists, Hirsch seems to have lost the plot along the way, and instead of recognizing the fundamentally positive nature of British identity, she tears it apart – all under the guise of presenting a “warts-and-all” perspective that doesn’t brush uncomfortable truths under the carpet.

But what begins as a quest to get Britain to look at itself in a mirror ends up as a McCarthyesque witch-hunt that targets icons of British history and trashes Britishness as hypocritical snobbery masquerading as tolerance and inclusiveness.

For Hirsch this is not new territory. Last August, in the wake of the removal of Confederacy monuments in the U.S., she wrote an article headlined, Toppling statues? Here’s why Nelson’s Column should be next. The article demanded the removal of London’s most prominent monument, Nelson’s Column, erected in 1840 to honor the memory of Admiral Horatio Nelson (1758-1805) who led the British naval fleet that decisively defeated Napoleon and his allies at the Battle of Trafalgar.

For Hirsch, honoring Nelson is a provocation, on account of his notorious opposition to William Wilberforce’s campaign to abolish slavery. Nelson is “what you would call now, without hesitation, a white supremacist,” making his continued hero-status an affront to the descendants of slaves whose slavery he both endorsed and exploited.

I have not read Brit(ish), and doubt I ever will, but I did glance through a number of reviews. Michael Henderson in The Times called it a “racism-obsessed polemic [that] is tiresome and clichéd,” while David Goodhart of London’s Evening Standard called it “a case study of disaffected identity, shaped by a sense of exclusion that [Hirsch] positively seeks.”

Earlier this week Hirsch took things up a notch with a TV program called The Battle for Britain’s Heroes, in which she challenged the universal reverence for Sir Winston Churchill, the fearless wartime leader who led the fight against Hitler that ultimately resulted in his defeat. It was this new iconoclasm that resulted in a heated debate with Piers Morgan on the widely watched TV program, Good Morning Britain. Morgan unequivocally condemned Hirsch’s attempt to “besmirch” Churchill by suggesting he was an unreconstructed racist.

“You know what? Beating Adolf Hitler, winning the war, stopping him exterminating every Jew he could get his hands on, these to me are far greater achievements than the negatives that lurk in his past, which lurk in anybody’s past.”

Hirsch forcefully defended her position, saying that admiration for Churchill was the product of ignorance regarding his darker side. Piers dismissed this, telling her that she needed to look at the “bigger picture.” But Hirsch was unrepentant. “This is the bigger picture!” she replied.

So, who was right, Morgan or Hirsch?

At the end of Beha’alotecha, there is a short narrative about Moses’ sister, Miriam, who criticizes her brother, and is punished by God for doing so. God tells her that Moses is different from everyone else, even other prophets, and she had no right to criticize him (Num. 12:1-15).

Maimonides uses this episode as proof of the severity of gossip and slander, in Hebrew known as lashon hara. Notwithstanding the fact that Miriam had nurtured and cared for Moses as a child, and had meant Moses no harm, she was penalized and reprimanded for her words.

Holocaust martyr, Rabbi Elchanan Wasserman (1874-1941), puzzles over the idea that this story is the basis for the lashon hara prohibition. After all, Maimonides includes the supremacy of Moses as the prophet who delivered the Torah to the nation as one of his thirteen primary principles of faith. Surely this means that Miriam’s offense was not simply lashon hara; her criticism undermined a primary Jewish belief, and that was why she was so severely chastised.

Rabbi Wasserman’s solution is casuistic, and doesn’t really feel right. Miriam was not a heretic, he says, as it was only through God’s reaction that Moses’ unique status became known. When Miriam spoke about him, he was still considered ordinary, and her words were considered straightforward lashon hara. This, he says, resolves the problem with Maimonides use of this story as the basis of the laws of lashon hara.

I would like to suggest an alternative answer. Rather than trying to undermine her brother’s leadership or destroy his image, Miriam was simply engaged in constructive criticism, however misguided. Indeed, this is often the case with lashon hara – the agenda is to correct an aberration or improve a situation.

Maimonides understood that any lessening of our greatest prophet’s supremacy undermines the Torah’s stature and is therefore a grave threat to Judaism. And while not exactly comparable, it is equally clear that if the legacy of Sir Winston Churchill is threatened, the freedom for which he fought will inevitably also be in grave danger.