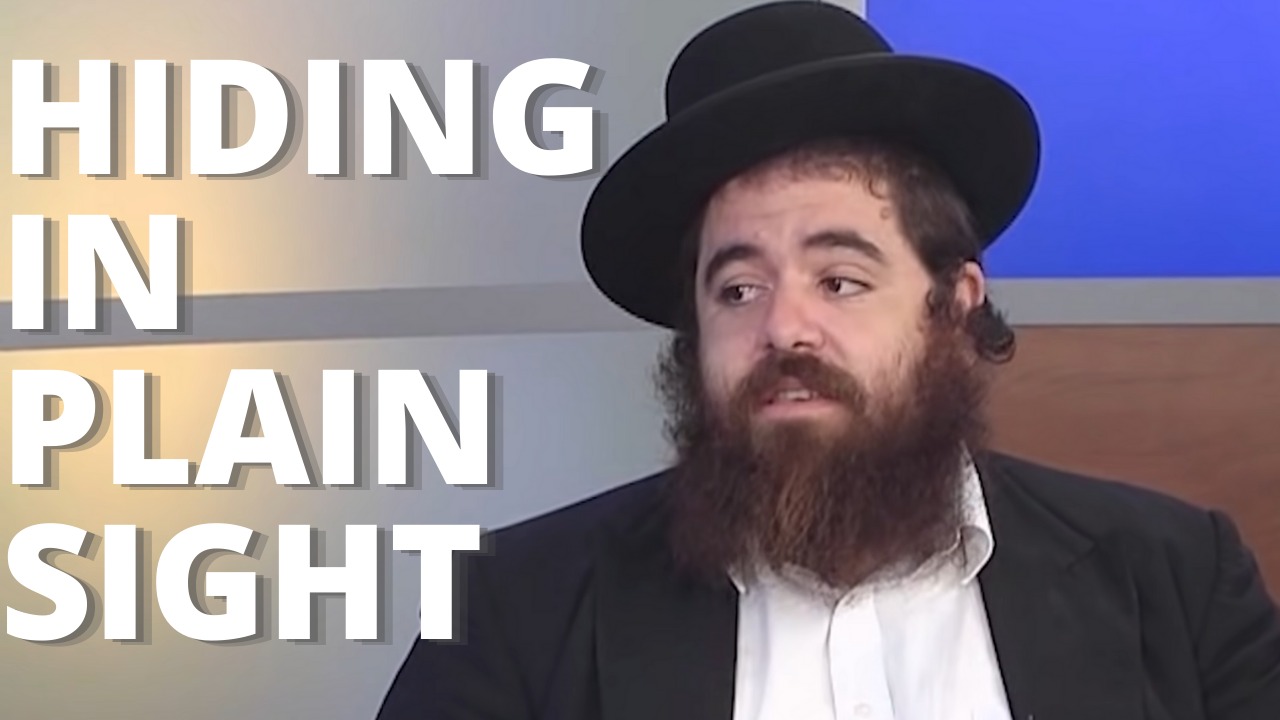 If you were on the lookout for a bizarre news headline this week, I don’t think you could have beaten this one: “Shock After Christian Family Found Living as Orthodox Jews in Jerusalem”. No, it’s not a National Enquirer “scoop”, nor the ramblings of some dubious blog – this story is actually true. An American Christian, Michael Elk, using the fake surname “Elkohen”, together with his wife and five children, has been living as a Sephardic haredi Jew in the French Hill Jerusalem neighborhood for the past six years.

More shockingly, Elk was hardly low-profile. On the contrary, he actively touted his professional expertise as a sofer (ritual scribe) and mohel (ritual circumciser) – and believe it or not, there is a YouTube video of him performing a Brit Milah (ritual circumcision) on his own son, while in another video he demonstrates how to put on tefillin (phylacteries) Sephardic style. As if this isn’t enough, he claimed that he was “a cousin to the Baba Sali and a descendant of the Arizal amongst others” and that “after obtaining semicha” he “made the daring leap of seeking to learn Kabbalah.”

And although this deception is outrageous enough – indeed, it is beyond appalling – the story takes on a rather more disturbing tone with the revelation that despite Elk’s outward appearances – viz. shaved head, bushy sidelocks and beard, black hat, giant yarmulke, and the strictly-observant lifestyle of a haredi Jew – he has always been and remains a devout Christian who deliberately embedded himself into the clearly credulous Orthodox community to act as a missionary.

According to the website Behadrei Haredim, Elk admitted as much when confronted with the evidence of fake credentials utilized to gain Israeli citizenship, along with countless other lies he has used over the years to burnish his bogus identity. There are also videos of him appearing alongside Christian pastors posing as an “Orthodox Jewish Rabbi” in which he reveals both his intimate knowledge of the Christian gospels, as well as his devoted belief in Jesus.

Make no mistake, my horror at this story is not a reflection of my feelings towards Christians. Truthfully, I am amazed by Evangelical Christian support both for Israel and for Jewish causes – in my view, a true sign of Messianic times, as ancient enmities between our faiths fade into the background, so that the faithful can prepare for the end of days.

But that is only as long as we can all feel safe in the knowledge that we respect each other’s faith beliefs, and will never attempt to proselytize and convert, even if we feel our faith is right, and theirs is wrong. And certainly not – certainly not! – via underhanded means. Let me make myself absolutely clear to all my Christian friends: whoever set up Michael Elk as a “sleeper” in the Orthodox community – and I don’t for a second believe that he acted alone – must be identified and rooted out. This type of behavior is just not on.

Curiously, Elk is not the first person to fake Jewish identity and get away with it. In 2018, it was revealed that Wolfgang Seibert, 71-year-old chairman of the Jewish community in Pinneberg, Germany, wasn’t Jewish, and had been deceiving the local community since 2003, climbing through the ranks until he had reached the most senior leadership position. It turned out Seibert had carefully fabricated his Jewish origins and was actually a Protestant – from a family of Nazis!

There was also the stunning story of “Jacoob Ben Nistell”, who claimed to be from Haifa, Israel, and began teaching classes about Judaism in Poznan, Poland. He was so successful that the small Jewish community appointed him as their rabbi. In 2016, a Polish newspaper revealed that this charming man with long sidelocks, a generous beard, and a wide-brimmed black hat, was actually Jacek Niszczota, a Catholic cook from Ciechanow in central Poland. Someone from his hometown had apparently recognized him after he was interviewed on TV.

Interestingly, the Poznan community bore Niszczota no animosity after he was exposed – on the contrary, the President of the community admitted that she “admired his determination” for having learnt Hebrew and all about Judaism by “listening to Israeli radio programs.” Additionally, he had never taken any money for his work with the community. Meanwhile, Poland’s Chief Rabbi, Michael Schudrich, expressed bewilderment: “Who, 30 years ago in this country, would have pretended to be a rabbi – to say nothing of 70 years ago?” he asked. Quite bemused by the revelations, he also couldn’t bring himself to be angry with Niszczota, whom he described as “very sweet and smiley.”

Then there’s the rather more sinister tale of “Rabbi Dr. Shmuel Golding”, a high-profile anti-missionary activist in Israel during the 1980s. Claiming to have been rescued as a baby from the Babi Yar massacre, according to his version of events he had ended up in England, where he was raised a Christian and had married the daughter of a prominent bishop. He also claimed that an enigmatic character had appeared out of nowhere while he was a child, and told him he was actually descended from a prominent Hasidic “rebbe”. Still, he persisted in his Christianity, becoming a missionary in Turkey, although he ultimately returned to the Jewish fold – or so he said.

As it turns out, his fantastic story was a collection of blatant fabrications – he was neither a rabbi nor a doctor, and his name wasn’t Shmuel Golding. In reality, he was an Evangelical Christian pastor from England who abandoned his wife and children and reinvented himself as a haredi Jew in Jerusalem, and may very well have been a closet missionary who posed as an anti-missionary, hiding in obvious sight. (My friend Paul Shaviv, who met “Golding” in the 1980s and always suspected he was a phony, has a large collection of material about him, and has also been in contact with his estranged gentile family.)

What struck me most about the story of Michael Elk’s deception is that it emerged in the week we read Parshat Emor, which ends with the rather jarring account of the blasphemer. This story seems out of place, appearing out of nowhere following the Torah’s discussions regarding priestly purity and holiness, the mandated festivals, and various other ritual obligations and prohibitions. Additionally, the blasphemer is introduced to us with a rather odd description (Lev. 24:10): וַיֵּצֵא בֶּן אִשָּׁה יִשְׂרְאֵלִית וְהוּא בֶּן אִישׁ מִצְרִי בְּתוֹךְ בְּנֵי יִשְׂרָאֵל – “And the son of an Israelite mother who was the son of an Egyptian man went out among the Israelites.” This surprising record of his parental ancestry precedes the details of a heated altercation which resulted in the blasphemer profaning the name of God.

The medieval commentaries debate whether this unnamed individual was actually Jewish – namely whether matrilineal descent as a determining factor for Jewish identity was practiced before (and even after) the Torah was given at Mount Sinai. The starkly differing opinions are recorded by Ramban, and the context seems to be that Jews could never blaspheme, even under duress, and that this man’s blasphemy resulted from the fact that he was the son of a diehard Egyptian pagan.

Without stepping into this fiercely contested debate, I certainly feel it is worth noting that despite the fact the Torah stresses time-and-again how important it is to show kindness to converts, and those who seek to join our people, this is only if they are not בֶּן אִישׁ מִצְרִי בְּתוֹךְ בְּנֵי יִשְׂרָאֵל – a child of the Egyptians among the Jewish nation. A snake in the grass will inevitably lead to devastation and turmoil – both emotionally and spiritually – and may even lead to blasphemy and an abandonment of the Jewish faith. And it is those who are the most devoted to ritual observance, and to the pursuit of sanctity and spirituality, who are particularly vulnerable if someone appears to be a “son of Israel” but is in fact a “son of Egypt”.

This week, as I read through some of the blog reactions penned by Elk’s shocked neighbors and friends, especially those who supported him through the grave illness of his wife and after her death, I was very moved by their purity and innocence, evident from their willingness to trust a fellow “Orthodox Jew” and offer him and his family their hearts and resources. At the same time, the pain caused by the revelation that Elk was a conman is beyond description, driving home the message that the gravest of dangers can sometimes be very close to home.

THE TRUE VALUE OF LIFE