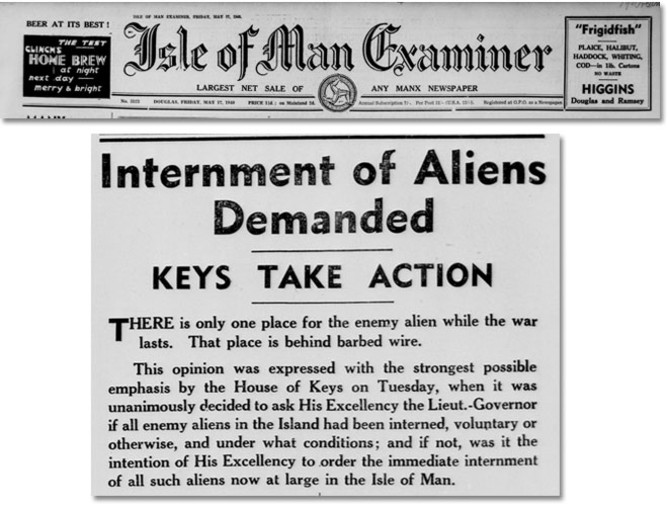 Sometime during 2001 I became acquainted with the popular TV personality David Baddiel. We first met at a social event in London’s West End, and shortly afterwards he joined us for Friday night dinner at our home. During dinner it somehow emerged that we shared something unusual in common – both our grandfathers came from a city called Konigsberg in East Prussia, and both of them escaped to the UK from Nazi Germany shortly before the outbreak of the second world war.

We were both fascinated by this coincidence, especially when David revealed that he had started writing a novel loosely based on his grandparents’ experiences during those initial years in England. The book was ultimately published in 2004 under the title The Secret Purposes, and was highly acclaimed by literary critics.

David’s grandfather had already passed away by the time we met, but my own grandfather was still alive, and David asked if he could meet him as part of his background research for the novel. So one afternoon I picked him up from his home in Primrose Hill, and we drove to Stamford Hill, where my grandfather lived. Stamford Hill is an area of London densely populated by ḥaredi Jews, and my grandparents moved there in 1947. In 1960, my grandfather was appointed rabbi of the Adath Yisroel congregation in Stamford Hill, the flagship community of the Union of Orthodox Hebrew Congregations, an umbrella organization for dozens of ḥaredi communities across London.

I just want to stress how utterly incongruous this meeting was by explaining that my grandfather had never heard of David Baddiel in his life. The reason was very simple: he never watched TV and had no knowledge or interest in media personalities. Meanwhile, to be fair, David Baddiel had never heard of Rabbi Joseph H. Dunner, Presiding Rabbi of the Union of Orthodox Hebrew Congregations, either.

But remarkably, despite this mini clash of cultures, David Baddiel and my grandfather immediately hit it off, and during the two hour meeting my grandfather regaled us both with fascinating stories, many of which I had never previously heard, all of them about those first few difficult years for him and my grandmother as penniless refugees in England.

David was particularly interested in my grandfather’s time on the Isle of Man. He wanted his novel to convey the experiences of German Jewish refugees who had been interned as enemy aliens in 1940 on the Isle of Man when the British authorities were suddenly gripped by the understandable fear that some of the German refugees they had taken in could turn out to be “Trojan horse” Nazi infiltrators who would facilitate a German invasion of the British Isles. My grandfather spent a few months in the Isle of Man before being released. David’s grandfather was there for almost a year.

I have been thinking about the Isle of Man internment these past couple of weeks as the refugee crisis in Europe has escalated out of control. On the one hand there are those who say that refugees fleeing war-torn regions of the world should be given the chance to find homes in countries where they are not in any danger, no questions asked. Others point out that while these refugees are indeed in dire circumstances, many of them come from countries and cultures that incessantly spew hatred of the West, and whose ideologies are at odds with democratic values and Western tolerance.

My thoughts about this issue are colored by my grandfather’s experiences. If my grandfather, and David Baddiel’s for that matter, both of them genteel, civilized, university-educated German Jews, whose persecution by the anti-Semitic Nazis meant that their sympathies were certainly not with Hitler and his cohorts, could be interned on the Isle of Man for many months on the basis of a slight risk that they were Nazi plants, why is it not politically correct to at least consider the possibility that today’s refugees from countries and cultures that hate the West might just pose a danger to the countries in which they are claiming asylum? I am not suggesting they be interned, but surely we have a duty to ensure that there won’t be problems down the line.

I subsequently asked my grandfather if he resented his internment on the Isle of Man. Certainly not, he told me – Britain was at war. And of course, once it became clear that he was no threat he was freed. But nowadays, the mere idea that any refugee should be treated with suspicion is met with unbridled indignation. Apparently, it is immoral to refuse entry to refugees on the basis that they could be a threat. The principle of habeus corpus is enshrined in our legal system, and is therefore sacrosanct. In other words, “you are innocent until proven guilty,” and no person should ever be considered a danger simply because of their point of origin.

Interestingly, Jewish tradition does not buy into the concept of assumed innocence. In the final portion of the Torah, Vezot Haberacha, we read about the death of Moses (Deut. 34:5): וַיָמָת שָׁם מֹשֶׁה עֶבֶד ה’ בְּאֶרֶץ מוֹאָב – “Moses the servant of God died there, in the land of Moab.”

The commentaries are puzzled, as this is the first time Moses is ever referred to as “the servant of God.” Why now? Why not before? The Midrash explains that God never refers to anyone as “holy” until after they have died, because while they are alive they could do something bad, and even the most righteous of individuals may give in to temptation at some point. Only once a person has died, and has been righteous throughout their life, can they safely be referred to as “holy” and as a “servant of God.” So much so, that even Moses, the greatest of all Jewish leaders who communed with God “face to face,” and whose purity and loyalty to God was evident every day of his life, could only be referred to as “God’s servant” once his journey was complete.

The point is, if even those who are beyond reasonable suspicion can fail, why would anyone suggest that someone brought up to hate the West is not a danger to anyone simply because they are in a dire situation? If my grandfather, a righteous upstanding individual arrested by the Nazis for being Jewish could be interned by Great Britain as a potential threat – and, as he told me, he understood why they had to do it – surely anyone emanating from a country or culture that opposes everything the Western world stands for should accept, if they demand asylum and acceptance in the West, that their new host country may be initially wary.

There are never easy answers in the debate over immigrants and refugees, and it is a hot-button topic that may never be properly resolved. Nevertheless, I believe this important issue deserves an honest debate in which every aspect of the benefits and dangers of absorbing refugees escaping from countries who are openly at war with the West will be considered. As someone whose family was only able to escape certain death at the hands of the Nazis as a result of the willingness of Great Britain to take us in, I am fully aware of the desperate situation of refugees trying to get away from war-torn regions of the world. But a state’s first duty must always be towards its citizens, and every effort must be made by those in power to ensure the immediate and strategic safety of the population.